TO UPDATE OR NOT TO UPDATE? THAT IS THE QUESTION...

Comparing the BERYL The PERIL strip in the DANDY ANNUAL
for 2013 with that of the Beryl strip in the late, lamented weekly, I note
that her father is different in both strips.  In the Annual, it's the 'original'
father (who was surely DENNIS's Dad's twin brother), while in the weekly,
it's an updated version who has a little hippy beard.  Over in The BEANO,
I see that Dennis also has a new set of parents.  Perhaps, in Dennis's case,
it's to tie-in with his TV cartoon series, but, if not, I'm bound to ask why
they make such changes? 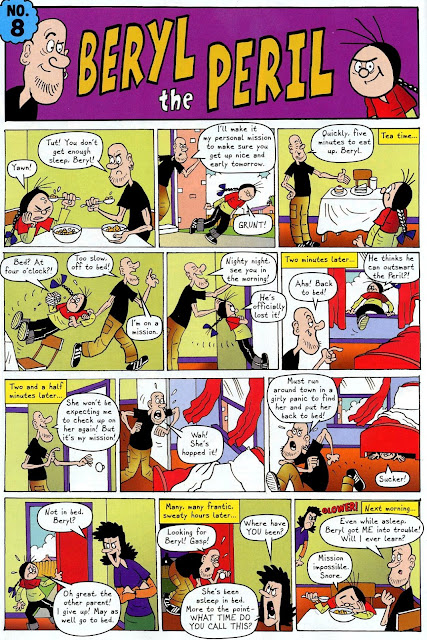 I can't help but think it's a misguided attempt to 'update' the look
of the strips to appeal to a modern audience.  What such an approach
overlooks is that kids don't bother with such things, even if they notice
them.  It's adult editors who get their knickers in a twist over Dennis's or
Beryl's Dad looking 'too middle-aged' for today's young readers.  When I
was a kid, teachers wearing gowns and mortarboard hats in the WINKER
WATSON strip weren't something that most 1960s youngsters had ever
experienced outside of an old WILL HAY movie, but it never seemed
anomalous in the slightest.  We probably just subconsciously assumed
that schools where teachers wore such apparel existed somewhere. 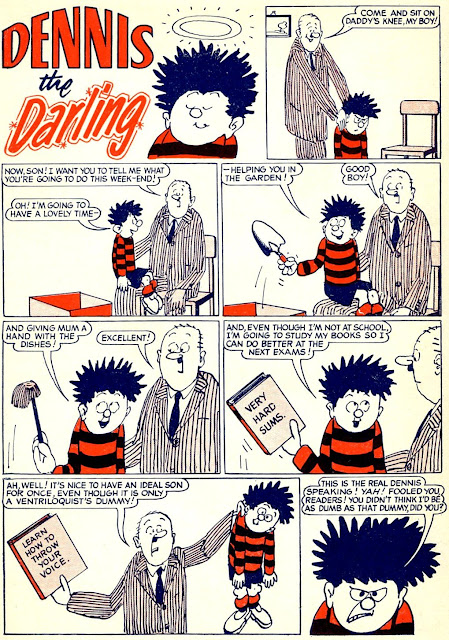 There is something inherently ludicrous-looking about the way artist
DAVEY LAW drew Dennis's Mum and Dad which was funny to see, so
to 'update' them (and in the process diminish the visual humour of Dad's
pinstripe suit and Mum's woolly jumper) is to miss the point entirely.  Leave
these comic strip icons alone, DCT editors, and instead focus on making the
strips funny, rather than worrying about them looking 'with it'.  Having said
that, however, I've actually been getting a few chuckles from The Beano
recently, and this week's Dennis strip was a nice little read.  If the comic
continues in the same vein, I might continue to buy it, but I'd still prefer
to see the characters with their original set of parents, rather than
the new, young, trendy ones they've been given in recent years. 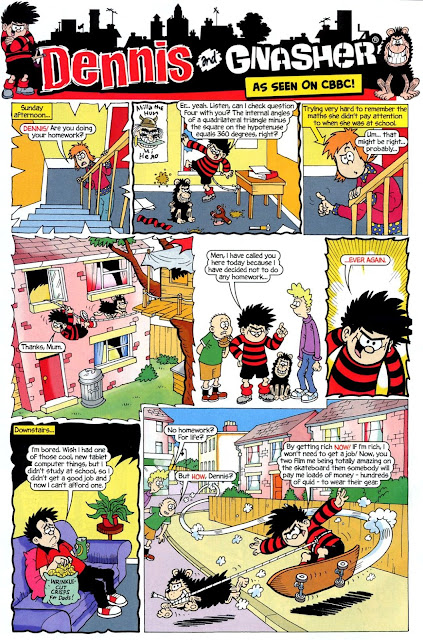 What do the rest of you think?  Agree, disagree, couldn't
care less?  Let rip in the comments section.

Incidentally, look at the lettering on the above pages.  Note that
the easiest one to read at a glance is the classic Dennis story.  Now
if only D.C. THOMSON would take note.
Posted by Kid at Friday, December 07, 2012

It is a shame when they have to ruin traditions/conventions.

And for no good reason too, Chris.

Ah, but what if these are lampoons? I've decided that I'm now too old for denim jeans and the sight of bald, fat men in teenage hoodies and trainers ( or calf-length shorts in summer, ugh!) deserves to be mocked. Beryl's dad in his combat trousers and boyish scruff looks a complete embarrassment- maybe that's the point.

You might also notice that Minnie the Minx and Roger the Dodger have got new parents as well.

As long as they don't "update" Teacher, I'm not going to be complaining much, although I do miss the old pin-stripe suits (which I don't think Dennis's dad has worn since around 1996-ish).

I don't mind Beryl's 'new' dad quite so much because, essentially, he's still in the Davey Law mould, but Dennis's dad's new incarnation I just can't take to at all. I don't remember having noticed Roger's new pater - I'll keep an eye out for him.

When I was a kid, I'm not sure that I differentiated between adults of 25 and 45 - they just all seemed like 'grown-ups' to me. That's why I think the reasons for giving characters younger-looking parents are slightly spurious.

Dennis the Menace is a lot funnier at the moment, regardless of the parents. Funnily enough it's being written by one of The Dandy's former writer/artists...

I actually mentioned in the post that I've found Dennis to be quite funny recently. However, I prefer the original parents - they just looked 'funnier'.

I got completely confused when I had a peek at this year's Beano annual and saw some useless attempts at updating the parental figures. My friends, all ex-readers, thought it was a daft thing to do - 'Dad' has been exactly the same some sixty years and it seems a trifle odd to suddenly swap it over for what we have now.

In the case of Dennis, I think the change may well have been instituted by the TV cartoon makers, but DCT should stick to their guns and refuse such alterations.

In the case of other characters, it's a sign that editors are imposing changes in the hope they'll result in some kind of 'positive' side-effect. "Perhaps if we make the parents less middle-aged, kids will relate to them more and our sales will increase." Desperate tampering by clueless people.

It might amuse you- or annoy you- that, on Friday, a 13 year old asked me if WWII was in the Victorian Era. Later, a 16 year old asked whether the Battle of Britain took place in WWII. So maybe they don't notice anachronisms at all. Rather sweetly, most kids I know think they have a very cushy number compared to the past.

And in a lot of ways they do, Dougie. No sweeping chimneys any more, for a start. I'm not a big fan of kids, although one of my neighbours is. He says they're good with chips, but that he couldn't eat a whole one.

Terry Bave always drew dads with completely bald domes, a little thatch of hair above each ear, and about three strands combed over the top, Bobby Charlton-style. For years, whenever I had to draw a comic 'dad', I always followed the Bave template.

The bald look is just funnier, I suppose. At least for comic characters' dads.