EXPLOSIVE POWER ACTION FROM THE 1960s... 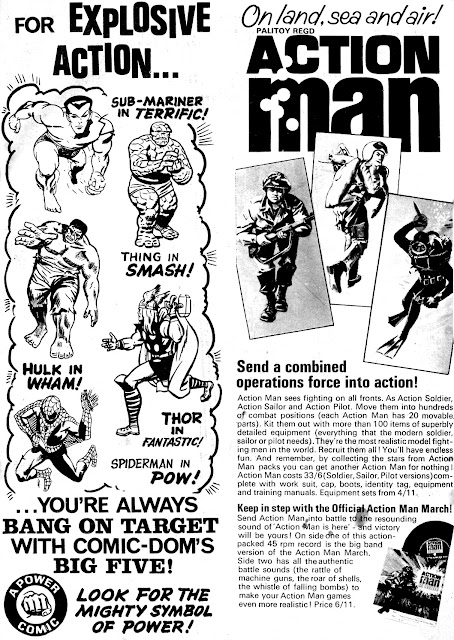 There was also DOCTOR WHO, The DALEKS, STEPTOE &
SON, Z CARS, SUPERCAR, YOGI BEAR, CRANE, The SAINT,
FIREBALL XL5, The BARON, MAN In A SUITCASE, STINGRAY,
The CHAMPIONS,  The MAGIC ROUNDABOUT, THUNDERBIRDS,
The MONKEES, The ADVENTURES Of ROBIN HOOD, CAPTAIN
SCARLET, The MAN From U.N.C.L.E., The FLINTSTONES, The
PRISONER, JOE 90 and loads of other programmes that, to people of
a certain age, the mere mention of will conjure up images of
happy childhood days.

The swinging '60s also belonged to The MARVEL AGE Of
COMICS, with such spectacular superheroes as The FANTASTIC
FOUR, The INCREDIBLE HULK, The SENSATIONAL SUB-MAR-
INER, THOR The MIGHTY and The AMAZING SPIDER-MAN, to
name but a few.  In Britain, most of us discovered our Bullpen buddies
through the pages of comics like WHAM!, SMASH!, POW!, FAN-
TASTIC and TERRIFIC, published by ODHAMS PRESS.

Having just mentioned all the preceding programmes, toys and
comics, you're no doubt wondering where the accompanying images
are.  You'll simply have to make do with the ad from FANTASTIC
#15 at the top of this post, 'cos  I ain't knocking myself out!
Posted by Kid at Friday, December 07, 2012