THE MUSIC OF BARRY GRAY CD - AND IT'S MINE! 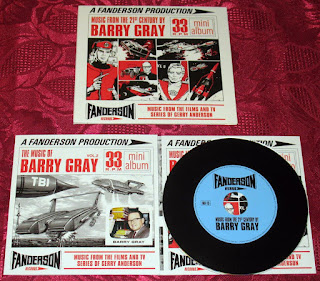 Regular readers may recall my post about Fanderson, the Gerry & Sylvia Anderson Appreciation Society, and how it seems to think that 5 months counts as a year when it comes to sending out membership renewal reminders.  Even though the original wording of the terms and conditions gave the impression of a full year's membership (as was likely intended to begin with), they've now been comprehensively rewritten to remove any such 'contractual' obligation, rendering a membership's duration far more flexible and well under a year.  A membership period now consists of three club magazines which are not published with any regular frequency, and consequently, members have no assurance of just how long their status lasts.  (Should a membership commence with the latest magazine, but only two are published that 'year', the membership isn't extended until the third one is available, which puts a lie to the claim that membership lasts for three mags.  Seems it only works in their favour, not members.)

This suggests the club's chief interest is in making members pay more often than they should have to in order to increase the Society's income, rather than provide a fixed period of membership like other clubs and organisations do.  The situation might have arisen from not having a set schedule for publication of its fan magazine, but their refusal to rectify this (by simply offering a full year's membership which would include only 3 magazines regardless of how many are published in a given year) tends to indicate a deliberate strategy to make members part with their cash sooner than should be required.  (For example, had I renewed my membership when asked to, I'd have paid £62 in a 5 month period as opposed to £31 every 12 months.)  Anyway, I only joined to gain access to their 'shop', which is exclusive to members, and having bought everything I wanted from it that was available at the time, I won't miss being part of their group.

So, incompetence or lack of effective organising may have been the original cause, but having twigged to the cash benefits, it now seems that a cynical and deliberate intention to exploit members lies at the heart of their intransigence in recognising a year as a year.  I therefore had no interest in renewing my membership as I refuse to be ripped off in such a manner, but the downside of that is missing out on the latest 'free' gift currently (and exclusively) on offer to renewing members - a combined CD reissue of the Barry Gray vinyl EPs originally made available in 1986 and '88.  What a bummer!  Back in the early or mid-'90s, someone lent me their two records so that I could record them and photocopy the covers, but there's nothing like having the 'official' product, is there?  (Even though I could make CDs for myself which would appear professionally produced.)

However, I'd set my mind on acquiring this rare treat, and today I received it from a certain source, as you can see from the photo at the top of this post.  This will be bound to annoy the chairman of the club should he learn of it, but that's a 'plus' in my book, as he really needs to take a long hard look at himself and the way he runs things.  Other members should take him and his fellow colleagues to task and demand that membership should be for a fixed 12 months, not dependent on the erratic whims (or exploitative strategy) of the organisers.

Right, I'm off to listen to my CD.

So you won't be telling us how you acquired the CD? Congratulations anyway!

Hmm, I remember joining Fanderson back when the first EP came out, as I figured it was the only way I was ever going to get my hands on a copy of the UFO theme. I didn't know they'd issued two more discs later on. If you don't mind me asking, what music was on those two follow-up releases?

Here's the track list from the combined CD. On the previous vinyl incarnations, there were 8 tracks on the first, four on the second.