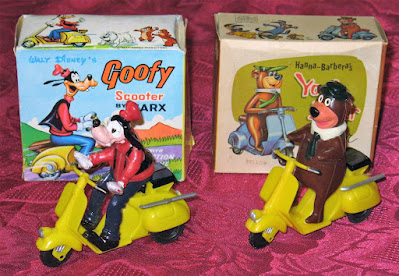 Another 'old friend' from childhood dropped in today as a permanent resident at Castel Crivens, over 50-plus years since I last saw him.  So welcome back to Goofy and his yellow friction-drive scooter, the exact same model that Yogi Bear rides, both produced by Marx Toys back in the '60s.  As you can see if you compare one with the other in the above photo, the exhausts are slightly different between the two, but there's a reason for that.

Marx, when it produced the Yogi scooter in the early '60s, didn't supply it with an exhaust; that was a later addition to their other scooter-driving TV, movie, and cartoon/comicbook characters.  Not quite sure why, because I don't think that's where a scooter's exhaust pipe would be; more than likely it would protrude from under the back end and wouldn't be so prominent.

I made Yogi's exhaust, which is held in place by double-sided tape, and it was only because I remembered my original Goofy scooter having an exhaust that I added one to Yogi's.  You see, I imagined that the one I had as a kid (I actually had two, but purchased at different times) must've had an exhaust because I remembered Goofy's scooter having one, but obviously I was mistaken.  The fact that Yogi's scooter has no apertures for an exhaust to plug into confirms this fact.

Anyway, I don't suppose this post will be of much interest to many of you, but I like to celebrate whenever I'm reunited with an item from my past so hopefully you'll indulge me.  And if any Crivvies had any similar toys when they were young, feel free to tell us all about them. 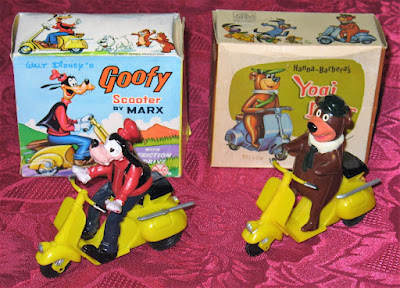 I'm not really a big fan of many old toys but I do like seeing the packaging as that seems to trigger my memory more than the toy itself. Those boxes are nice.

Looking at the Goofy box now, McS, it has more of a '70s look to it, so I'm wondering if I'm right about buying my original in the '60s> It would've been in the latter half of the '60s if I'm remembering correctly, but even I'm not sure these days when it comes to my memory. Age, eh?

I'm intrigued by the fact two separate licensing departments allowed the same scooter to be used with their characters and didn't demand an exclusive use.

They wouldn't have cared, T47. They were getting paid for the use of their characters; the fact that the same scooter was used for a friction-drive scooter toy in both instances wouldn't have been an issue.

Thousands of years in the future somebody will dig up Goofy on his bike. What is it?? An image of a god riding his chariot perhaps?

Nah, CJ, it's Yogi who fits that description. Goofy will be regarded as his prophet who went ahead to announce the bold brown bruin's presence. (Though 'god' is 'dog' backwards, so maybe you're onto something.)

Interesting to see two Characters from different studios. I would have expected Donald Duck not Yogi Bear as I would have thought Disney would not have been happy with Yogi Bear.. Obviously Marx must have some influence...

Not quite sure what you mean, LH - why would Disney not have been happy with Yogi Bear? Besides, the Yogi toy was made years before the Goofy one as far as I know. (Yogi, early '60s, Goofy, late '60s, maybe early '70s.) Did you mean Disney would've preferred Donald Duck to Goofy being used? Donald's legs would be too short for the scooter, and his webbed feet too wide.