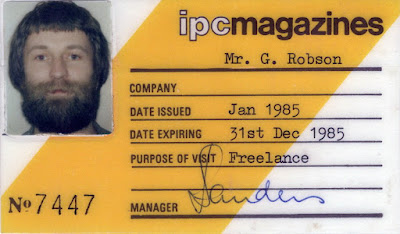 Back in my freelance days when I used to travel down to London every week (sometimes twice in one week) to return work to IPC Magazines (and look for more), I was issued with an ID card to get me into King's Reach Tower, where they were then based.  Even when the Youth Group which produced the comics moved into Irwin House along the road (in preparation for being sold to Robert Maxwell), I was still issued with a card because Irwin House didn't open until 8 or half-past in the morning, and I arrived in London around 6 a.m.  Luckily, King's Reach was open at that time, so I'd make my way up to my desk* on the 26th floor (stopping to get a coffee from one of the free vending machines for drinks located on every other level) and I'd either put any finishing touches to any strips I had, or stare out of the window at the view.
(*Incidentally, although I say 'my' desk, I think it was just one of a couple of spare desks, which were probably used by others when I and the sadly recently 'departed' Kevin Brighton [one of the art assistants] weren't there.  I thought of it as mine though, because I was the only person I knew of who used it with any degree of regularity.)
The card was renewed on a yearly basis, and the third (unnumbered) card would likely have still been my final one had I continued my journeys down south, as the Youth group and IPC would've parted company by the time the card expired.  By then, however (and despite any malicious gossip to the contrary), I'd proven myself unfailingly reliable in meeting deadlines, so editorial staff were already mailing work up to me, and I was returning it the same way.  If I recall correctly, I visited London only twice in 1987 - sometime in February and again in December, for a couple of days before Christmas Eve.  (Three times at a push.)
I wasn't there on that last occasion seeking lettering work (though I may've returned a job or two], I was down to meet up with Marc Jung, the former deputy editor of Buster, as we'd arranged to hang out and jaunt round the city while he showed me the sights.  And that was the final time I was down in the 'big smoke', all of 34 years ago.  I miss going there, but it'd probably be a shock to my system were I to return, as numerous changes have occurred since then.  For a start, IPC Magazines Ltd (now called IPC Media, I believe - or they were the last time I checked) no longer inhabit the tower (renamed South Bank Tower in 2013), which a number of years ago had extra floors added to it, in the process of being turned into 173 residential apartments.
Also, I doubt I'd have the stamina to endure 8 hours on a coach or train, even though I'd no longer be starting work within half an hour of my arrival, as I'm essentially retired from comics, as well as being a decrepit old fart whose 'get up and go' got up and departed a long time ago.  Perhaps it's best that I don't revisit the place, as then the way things used to be are still the same to me, even if only in my mind.  Anyway, poor you!  You're lumbered with having to look at my ugly mug in triplicate, but spare a thought for me; I have to wear that face on a daily basis - at least until I can afford a transplant. 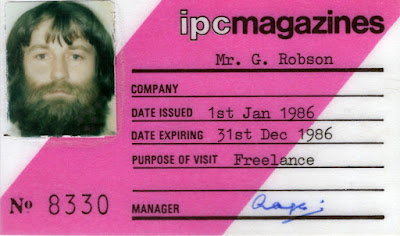 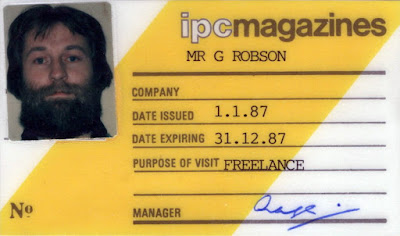 Looking at the second date on the third card, I'm reminded that I'd have been back in my former house for around 5 months by the time the card expired, though it was issued when I was still living in our new home, as were the other two cards.  A lot can change in a year, eh?
Posted by Kid at Monday, January 24, 2022

Nah, you've got it backwards - Alan Moore was going through a Kid Robson tribute phase at the time, CJ.

Is say it's more a cross between Karl Marx and Grizzly Adams than Alan Moore Colin.

Not to mention Karl Adams and Grizzly Marx, McS.

He is, CJ. Works on a fairground where people throw coconuts at him - they always miss, of course, 'cos he's so good at dodging them.

I think he may have taken a few of those coconuts to the head!

Better than taking a few coconuts to the nuts, McS.