THE BATMAN 'FORGERIES'... (A FABULOUS FLASHBACK)

In the May 1969 issue of DETECTIVE COMICS #387, the first BATMAN adventure was re-presented to readers of the time.  Note that I said 're-presented' and not 'reprinted', because the story featured was a re-creation, a 'tracing', effectively, of enlarged copies (in all likelihood) of the printed pages from issue #27 in 1939, and not from surviving period-proof copies from the editorial files. 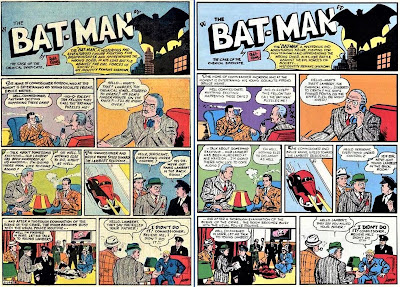 At the time, this was common practice whenever NATIONAL/DC didn't have proofs or original artwork from which they could reprint a particular tale. This tracing was reused in Batman FROM The '30s To The '70s, Detective Comics #627, and Batman ARCHIVES Vol. 1.  I don't recall whether it was used in the FAMOUS 1st EDITION, so perhaps someone out there can let me know. 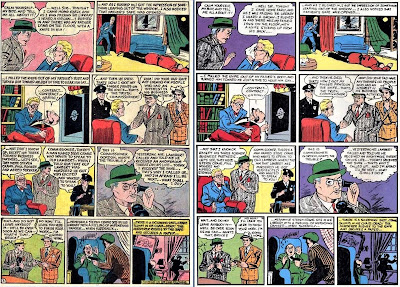 Out of all the 'reprints' of this tale, the only one I've got which seems to come from more accurate proofs is the MILLENNIUM edition published in 2000.  Strange that it took 31 years for DC to republish the original story (in standard comic-sized editions at least), instead of what was essentially a forgery. 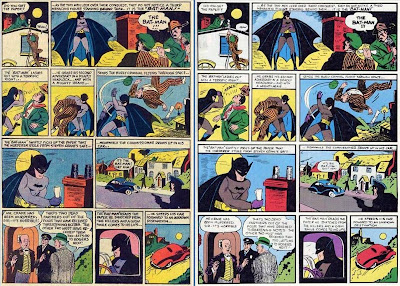 Anyway, just for you, here's the original (left) and re-created pages (right) side-by-side, so you can play 'spot the difference'.  Also included is a photo of a page from an actual, original 1939 issue (as printed in Batman THE GOLDEN AGE), so that you can compare it to the other two examples on view. 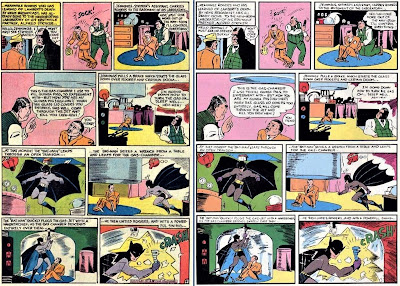 Go on, play 'Dark Knight Detective', and see if you can spot all the subtle (and not-so-subtle) distinguishing points between both versions of the pages.  Unfortunately, the fact that a tracing of the premiere story was used in the Archive Editions volume makes a mockery of its claim to be the "definitive collection". 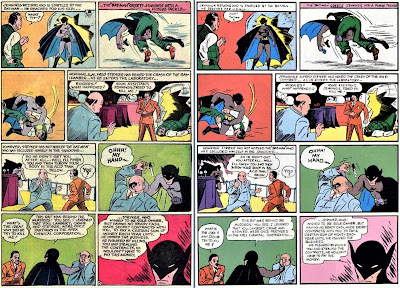 If you happen to own the aforementioned Famous 1st Edition issue of this tale, take a look at the story's second page.  If the middle of the top two tiers are out of alignment then the tracing was used as the source, not proofs of the original printing.  Unfortunately, I can't remember if I've got it or not, otherwise I'd check for myself. 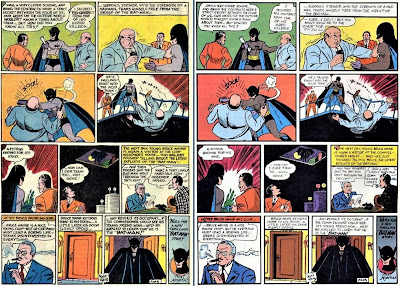 As promised, below is a slightly angled photo of page 3 from an original 1939 issue, as reproduced in the excellent book on Batman by writer and comics historian, the late LES DANIELS. 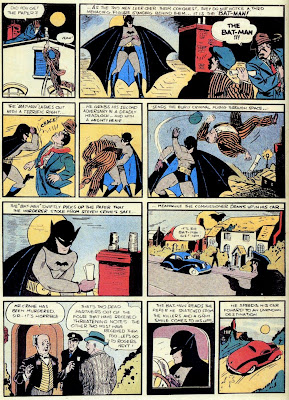 So there you have it.  Unless you're lucky enough to own an original issue of Detective Comics #27 or the Millennium Edition reprint (the jury's still out on the Famous 1st Edition), then the chances are that you've never actually seen the first Batman tale - only a mere paltry imitation.  Just think - "You wuz robbed!"  Better call Batman.  Oh, and just for completists, here's the cover to ol' Bats' debut appearance. 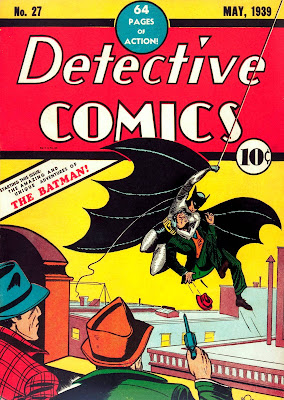 ******
Click on images to enlarge, then click again for optimum size.  Unfortunately, the interior comparison pages are not quite as sharp as I'd like, 'cos I enlarged them from smaller sized images.  They'll still do the job though.
Posted by Kid at Tuesday, January 18, 2022

The debut covers of Bat-Man and Spider-Man were sort of similar - both Bats and Spidey are swinging through the air while holding a man.

You remind me that I've been meaning to plow through all those delicious Millennium editions I gathered up for over two decades now. What am I waiting for?

I'd say the idea might be similar, CJ, but not so much the way it's been executed.

Two decades? It just doesn't feel that long ago to me, RJ. Wow, that is so scary.

Interesting stuff Kid. Some very different pages there from the original art.

I'm not sure if it's because whoever was doing it wasn't as dedicated as he should've been, or it was deliberate so that editors could spot the difference between the original proofs and the copies.

An excellent bit of research there, Kid. Something I'd never noticed (and not having an original Detective #27, was never likely to). Still, since ol' Bob Kane was renowned for tracing bits of Burnt Hogarth and others, particularly in Batman #1, perhaps the tracing can be seen as an homage to the lad who created Batman (with Bill Finger, of course).

Wally Wood was also known for swiping from Burne Hogarth (and others), B, though perhaps not as often as Kane. No doubt that's why Kane drew at home (when he actually did any drawing) and not at the studio where his 'assistants' worked; 'twas so they couldn't see him swiping from various sources.