TIME ALWAYS WINS - BY A KNOCKOUT!

Increasingly, these days I often find myself as much dismayed and frustrated by the things I can no longer remember as I'm surprised and grateful for the things that I can.  Take the 1972 KNOCKOUT Holiday Special for example.  I purchased this in the newsagent's across from my old house while at school one day, not long after flitting from my former neighbourhood, and I recall taking it from my schoolbag to gaze at on my way home.  (I still attended the same school after flitting, you see, which accounts for my presence in the area.)

I remember being fascinated by the striking blue and red on the cover, and also the pristine, uncreased newness of the comic.  What I can't recollect is exactly how long I bought it after moving to our 'new' house - was it mere days, or perhaps a week or so? I know it couldn't have been very long because we'd moved halfway through June, and the comic couldn't have been on sale in the shop for any great period of time, otherwise I'd have noticed it sooner as I was in every day.  For all I know, I could've bought it the very next day after flitting.

Another thing I no longer recall was whether I bought it during the lunch hour or after school - vague vestiges of seeming memory for both scenarios compete with one another in my mind.  What's certain is that it was either one or the other, and as I'd probably have been at the shops (just up the road from the school) between 12 and 1 to get my 'dinner' (a Devon Split most likely), let's just go with the former.  In fact, having typed that, I seem to remember being anxious for the afternoon to be over, so that I could get the comic home to read undamaged, which could've resulted from any overly-enthusiastic tussles with classmates.

The two replacements I now own of the comic (one acquired many years ago, the other having arrived only today) aren't in the pristine condition of their '70s predecessor, but they're both tidy enough to remind me of its shining newness, and of that walk home from school on a golden afternoon 47 years ago.  A lot of water has gone under the bridge since then, but I'm glad that the simple sight of a comic's cover can return me to an earlier age when I thought I had forever.

Time has disabused me of that illusion, but I'm grateful that I can occasionally recapture that feeling again, even if it's only for a fleeting, bittersweet moment that's as soft and swift as a butterfly's sigh in the face of a hurricane.  Here's to yesteryear - long may its echoes reverberate.

As a special treat, below is The HAUNTED WOOD strip from the above comic.  I'll maybe show more of the contents if enough Criv-ites request it. 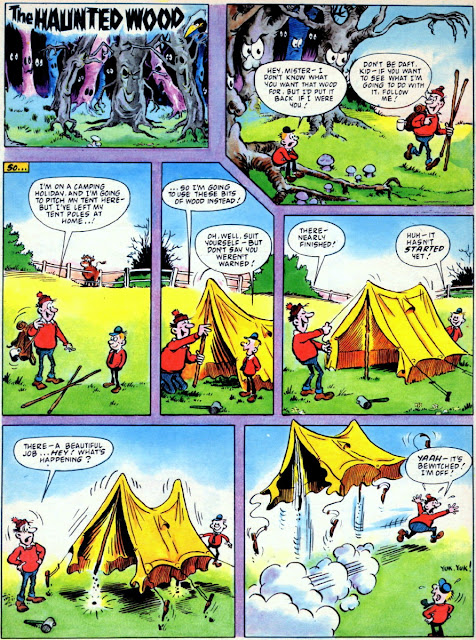 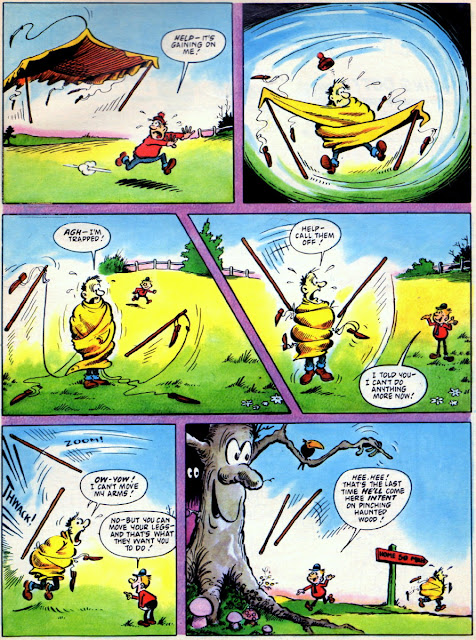 I definitely used to have that special - seems like only last week! :)

Bet you had a touch of the Warlord about you back then, eh?

Never had that special but I used to love a Devon split as a kid, not so keen on sweet stuff now though (especially cream).

Do they still make Devon Splits, PM? I quite fancy one - just for old time's sake.

Incidentally, Morrison's are going to be selling Snickers bars under their old name of Marathon for around three months - I must buy a few dozen.

I've certainly seen Devon Splits in bakers Kids. I wonder if Sainsburys will sell Opal Fruits (always thought that was a cool name for a sweet).

I read that some shop or other was selling Starburst (not the mag) under their original name of Opal Fruits a few years back. It's be great if it happened again. I remember that back in 2000, Aztec bars returned for a while - I had a few of them. I'd like to see Super Mousse and Junglies Jellies again too.

As we've gone onto sweeties, I really wish they'd stop referring to Nestle as 'Nest-lay'...it's like nails down a blackboard every time I hear it! I know it's a Swiss company and they've stuck an accent over it but it was always 'Nestle's Milky Bar!' sung on the ads when I was a kid...if they were trading under a false name back then, are we due some compo for our fillings? It would be like me suddenly announcing it's actually Stevay instead of Stevie...bloody daft I calls it...

You mean it ISN'T Stevay? Well, ya learn something new every day. I'd like to see Bar Six again, as well as Fry's Five Centres - and Old Jamaica. And your right - it's Nestle's! (And Oil of Ulay, not Olay. (No, I don't use the stuff, but I remember its real name.

It's soooo weird you mentioning Fry's (probably Fray's now) Five Centres! I was gonna mention it as a choc I really missed in my last comment but I couldn't remember what it was called. It was like Fry's Chocolate Cream but with multi-coloured centres instead of all white - I'm surprised that don't bring it back in this current diversity obsessed climate. Stick a rainbow flag on the wrapper and they'd be queueing up to stick one in their mouths...er...wait a minute...

In the early 70's me and my Dad had a long walk to find a newsagent open on a Sunday afternoon, so finally reaching one and buying 4 different choc bars (one for each of the family) was a treat!

Type the name into the blog's search box and you should see a post I did on Fry's 5 Centres, HS. At least you can still buy Fry's Orange Cream, which is another of my favourites. Another one I liked was Cadbury's Milk Tray bar, which (as you'll have guessed) was a bar of chocolate with different flavoured segments like you get in the box.

Just tried typing Fry's 5 Centres into the search box and nothing showed (strangely). However, Fry's chocolate will work - just tested it.

Tesco sells Old Jamaica Ginger Beer. I buy a can every now and then :)

But Ginger Beer ain't chocolate, CJ - rum and raisin chocolate with bits of orange in it. Yum! Besides, I prefer a real man's drink - milk in a dirty glass!