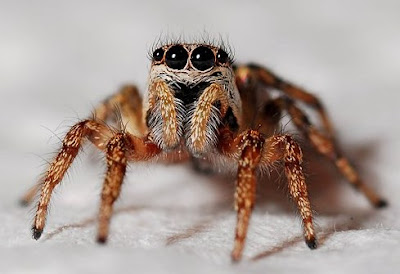 What's your view on spiders crawling around your house?  I used to leave them be when I saw them up on the ceiling because they weren't doing any harm, but then there were a couple of instances where I saw one scuttling across the floor and I became concerned that I might inadvertently stand on one and kill it.  Since then, I capture them and let them out in the front or back garden, but I feel a bit guilty because I don't know what their chances of survival are.  Maybe they'd be better taking their chances with me?


What's your view on the matter, fellow Criv-ites?  Do you let spiders be, squish 'em, or release them into the 'wild'?  I saw a tiny one the other day that looked like it was wearing a blue and red costume with a mask on, so I gave it a bit of cheese and let it out the door.  (Hang on - maybe I only dreamt that.)
Posted by Kid at Friday, September 20, 2019

I leave them alone as they get rid of wee flys etc. Seemingly if you put a house spider outside you would be as well squishing it as they cant survive although it seems they come back in the house soon after. Now Jenny long legs , Bluebottles and moths ughh

I don't like spiders and I catch them in a cup and put them outside. But I ignore very small spiders and I also mostly ignore daddy long-legs (which are actually a species of spider). I don't know where my dislike of spiders comes from because neither of my parents had any problems with them. But spiders aren't supposed to live in houses so I have no qualms about putting them outside.

Presumably they come from outside to begin with though, PM, unless they're beaming down from the Starship Spiderprise? Sometimes I put them out in the back porch, which is between an inner and outer door, and let them gad about there. I'd hate to stand on one though.

Maybe a big hairy spider pulled up outside your school one day, CJ, and offered you a biscuit and a ride home in his car. That would put you off them.

If they'd stay up on the ceiling or high up on the wall, HS, I'd just leave them to it. The only thing about them that scares me is accidentally standing on one. (Do they still publish Penthouse? Type its name into the blog's search box and read the post that pops up.)

I catch them in jars and turn them loose in a nearby wooded area. Presumably, they are better off outdoors, where they can catch more flies and mosquitoes than they could indoors.

Samantha Fox made a cute Youtube video of catching a spider with a cardboard box in her bedroom.

I've got news for you, TC - that was me in a spider-suit. Bit of a squeeze, but it was worth it to get into Samantha's bedroom.

I doubt they suffer too much by being slung outside...these buggers even eat each other, so if a bird chomps one, good luck to 'em...
They're only accidently helping us by getting rid of littler fellas...
I remember back in '75, my Nan gave me a few pence to go to the sweetshop. I came back with Monster Fun No.2 with the plastic spider (confirmation needed, Kid? ) which my Dad promptly broke into tiny pieces 'cos he thought I'd bought it on purpose to scare me arachnophobic Nan. Another reason I dislike Spiders!

It was a plastic spider ring, but I imagine the spider itself may have been detachable, HS. Surely you should dislike Nans though, not spiders? I suppose if they get eaten outside (spiders, not Nans), they're at least fulfilling their purpose as part of the food chain, whereas getting squished by my size 9s seems a lot more cruel and pointless.

Squish. I know you’re supposed to leave them they eat insects . But have you ever seen what’s under a web? Insect bodies which attract more insects .

Up in my attic (or loft as we Scots call it), there are loads of spider-webs with the remains of insects, PS, but I could still never bring myself to deliberately squish a spider. Sometimes I'll remove the webs (along with the insect husks) to tidy up a bit, but I know the spiders will re-spin them in no time.

I used to keep a bunch of tarantulas, so you can guess my answer. But then I take pity on wasps who are headbutting the insides of windows, too, so I dunno...

I usually open the windows and let wasps out if that happens, WJB. I get some strange looks from passersby when I slide a £5 note under any poor bees lying on the pavement and move them on to the grass. I even pick up snails and move them out of harm's way. I'm a big softy.