Heads-up, Criv-ites - the latest DC Facsimile Edition is now available, namely BATMAN #181.  That's it above, and that's it again below, next to my original issue. This time, DC have gone down the convenient road by simply scanning an actual ish of the 1966 comic, so the colours aren't quite as vibrant as previous facsimiles in the series.  Still worth having though.

(Note the difference to the checkerboard strip around the DC symbol and the Code stamp, as well as the lettering next to the Batman logo.  Also, the shape of the ivy around the bottom cover blurb isn't an exact match from cover to cover.  And I wish they'd leave the dates on, like MARVEL do.) 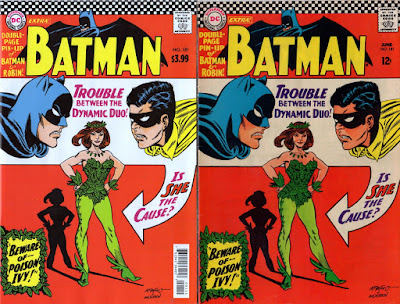 Below is a page from the original comic, compared to its duplicate in the facsimile. The difference is more obvious than can be seen here, because the light from the scanner tends to make old pages look a little brighter than they actually are.  At least you can get a slight indication of how the colours on the facsimile page aren't quite as deep as on the original.  Click on them to enlarge for a clearer indication of the difference. 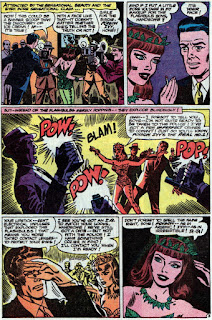 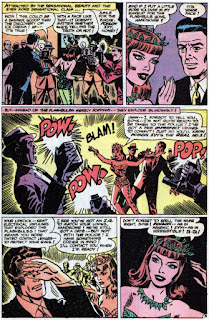 And below, just for the hell of it, is the pin-up in the middle of the mag.  This one's taken from the '66 issue, and as you can see, the Batman figure is the one used on the base of the CORGI TOYS BATMOBILE for many years back in the '60s & '70s ('80s as well, in fact).  So what's stopping you?  Get around to your local comics shop and buy one of these beauties today! 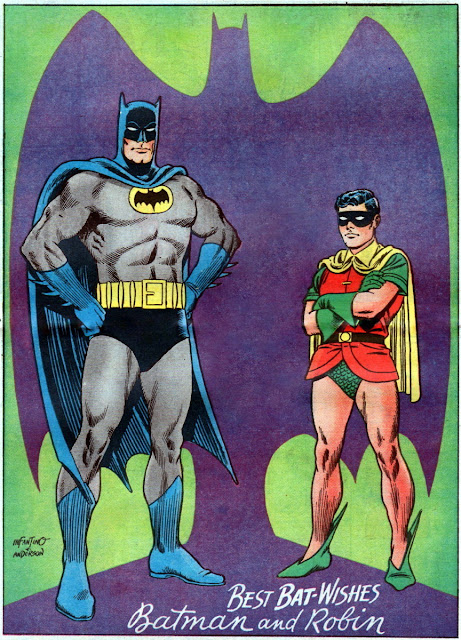 "Beware of Poison Ivy" is definitely one of the top two BATMAN-scripts by Kanigher, the other being "Death Knocks Three Times." I was particularly amused by the fact that Robin has to assume the role of "the cool head" as Batman gets semi-seduced by Ivy. However, though this Ivy had a great costume-design, she didn't make a very compelling villain until she took on her "plant mistress" schtick.

I must look out that other story, GP, as the title intrigues me. It also rings a bell, so I'm hoping I have it somewhere, even if only in reprint form. If not, maybe DC will release it as a facsimile. Thanks for commenting.

"Death Knocks Three Times" was first published in Batman #180, and was reprinted in the trade paperback Showcase Presents: Batman (vol. 2) in 2007.

IIRC, Batman #181 was pretty campy, showing the influence of the TV series. Poison Ivy made few appearances in the 1960s, maybe because she was (at that time) a seductive femme fatale, and that was pushing the envelope, as far as the Comics Code was concerned.

Thanks for the info, TC. It's years since I've read #181, so I'll re-read it in a couple of days or so to remind myself of what it's all about. Despite the differences in the cover I pointed out, the 'facsimile' version captures the spirit of the original, which, I suppose, is the main thing. Only someone with the original comic (like me) would be aware that it's not a perfect match. It was also used in the Tales Of The Batman book, featuring Carmine Infantino's art.

It's true that Poison Ivy doesn't get used a lot, but that may be because Kanigher was not just a writer, but also an editor, and he may have sent "hands off" signals regarding his creations, even though he had no legal right to restrict anyone, since Ivy was automatically DC's property. Aside from the Batman comic strip, where an ersatz take on Ivy appears, she only appears in two Batman tales and one "Rose and Thorn" story, all by Kanigher. She doesn't really get brought into the mainstream until a Len Wein JUSTICE LEAGUE story made her a member of the "Injustice Gang" and gave her a plant-controlling weapon-- which later authors expanded into her having personal influence over plants.

Thanks for the info, GP - to be honest, I think I've only ever seen Poison Ivy in two comics, and she never made much of an impression on me. Aside, that is, from the cover of #181, where she looks pretty 'hot'.