Just where do I begin? By going over old ground I suppose, and drawing your attention back to the recent facsimile edition of HOUSE Of SECRETS #92.  On page 5 of the SWAMP THING tale, part of the word 'the' had been clumsily relettered (presumably because the 'th' was too faint or hadn't reproduced properly, if at all), transforming 'the' into 'me'.  Made absolutely no sense, as you can see above.  (Click on images to enlarge.) 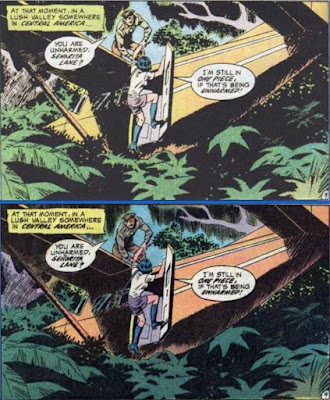 I recently re-read SUPERMAN's KRYPTONITE NEVERMORE! series (for the umpteenth time), but instead of digging out my original issues, referred to my DC COMICS CLASSICS LIBRARY collected edition of the nine issue saga.  All the stories were scanned from actual published comics, and this would've required parts being digitally (and maybe manually) cleaned up, especially on the lettering.  On page 9 of #237, the 'o' (and the tilde above the 'n') of 'Senorita' must have dropped out, so a badly angled 'a' had been scrawled in.  (The tilde was again missing over the word on page 16, but at least all the letters remained.)  Again, see image above. 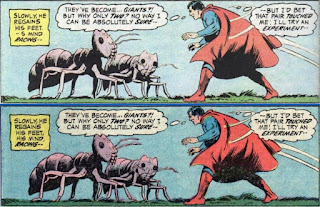 Back on page 13 of the same story, the 'hi' of 'his' was missing (see above), but at least no random letters had replaced them to transform the word into something else. Then, on page 12 of #241, the word 'transmissions' must've been smudged, because it'd been retouched to read 'transnussions' (see below), suggesting that whoever did it paid no attention to the rest of the speech balloon in order to understand what was being said.  It's almost as if they isolated the word in their mind and then tried to work out what it was (and failed). 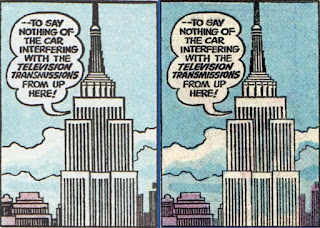 Or perhaps there's a simpler explanation. Maybe the person responsible was a foreigner (no, that's not a dirty word, Melvin, behave) who couldn't understand English, and simply took a stab at guessing what the faint or missing letters actually were, hence the less than satisfactory result?  Whatever the reason, DC needs to up its game when it comes to reprinting their material, and ensure that any 'restored' dialogue matches what the writer originally wrote.  There's just no excuse for the kind of carelessness I've described here.

What think the rest of you?

The HOS error was also included in the two reprints below.  For further details, see comments section. 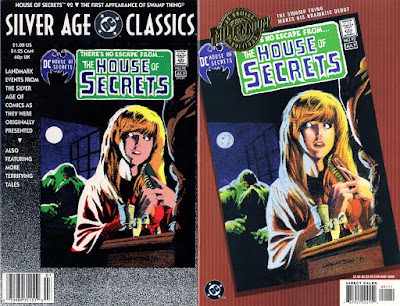 I spotted one last night in the reprint of Avengers #68 in the Marvel partwork Vision volume! Of course, so I could sleep, I then HAD to get the original out (well, an earlier reprint in my case) to compare and sure enough an 'it' had been changed to 'is' which renders the caption meaningless!
No way of knowing if these re-letterers skipped English lessons or if they're just daft, but it's worrying that the reprint editors aren't picking these things up.

I think DC and Marvel must both use the fella who does the subtitling on BBC news! :)

I've just found out that the Swamp Thing mistake goes back 27 years to the Silver Age Classics reprint, HS, and popped up again in the Millennium Edition reprint 18 years later (and 19 years ago), so DC have had all this time to spot it and fix it - and failed. That's three times now (at least) over a period of more then quarter of a century that the mistake has been allowed to slip through. Sheer incompetence! It seems like DC aren't paying the slightest bit of attention to the contents before publication.

Why would they care - it's money for old rope (or swamp vines) innit? No one's gonna ask for a refund over a typo no matter how much they've paid for a super-duper deluxe ultimate definitive reprint volume. The typo'd version becomes the only affordable version. I dunno how they arrive at some of them though - it's almost like a computer programme has scanned it and guessed?

They obviously have more than one set of proofs for their stories though, because it was sans mistake in the 1986 5 issue set, Roots Of The Swamp Thing, and also the 2009 DC Comics Classics Library edition, but they were re-coloured versions. It could be that whoever was responsible for the individual reprints after the 1992 Silver Age Classics issue has assumed that the mistake was in the original 1971 comic and just left it in. You'd think they'd check though.

Marvel have at least two sets of proofs for many stories, ones that are 'archival' and other ones that have since been replaced, which weren't quite so good. It's those ones that Marvel US supply to Panini for their reprints of classic stories, which means that the Panini reprints sometimes aren't so good, quality-wise. (Art touch-ups are more obvious, colours don't match the originals, etc.)

This might be a daft question, but if you've got the perfect originals why keep buying reprints of 'em only to be constantly disappointed? Last night I found myself comparing 2 different reprints of a 50 year old comic when I should've been asleep...it's nuts (but who else could I admit this stuff to?)

Well, the answer to your question is obvious, HS - I'm nuts too! And it could also be that I buy reprints of older comics because most new comics are sh*te.