Krazy Kat, by cartoonist George Herriman, featured a romantic cat and mouse relationship that introduced diversity for the first time in comics!  They are different colours too!  And Krazy was alternately male and then female.

Krazy Kat was a famous and important comic strip that ran from 1913 to 1944.  It first appeared in the New York Evening Journal.  The early Krazy Kat Sundays were printed only in black and white and appeared in a features page, in a non-colour section of the news­paper.  This was usually a section that included articles or editorial cartoons commenting on art, lifestyle, or news events of the day.  In early 1922, Hearst's New York American briefly experimented with a Saturday colour comics section that included a full, broadsheet-size Krazy Kat page.  It didn’t last long.  From 1935 to 1944, Krazy and Ignatz appeared in a tabloid-size comic section only in New York, Los Angeles, Chicago, and later, Baltimore.  These full-colour comics were found in a Saturday comics section, or in a second Sunday section supplementing the reg­ular full-size comics.

Krazy and Ignatz were introduced in an earlier strip, The Dingbat Family in 1910. The weird premise was always that Krazy loves a mouse, Ignatz, who is an ill-tempered, brick throwing mouse. 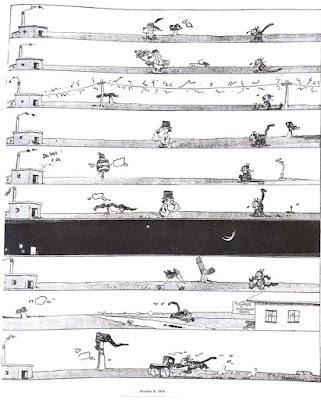 The creativity reflected in the relationship and characterization of the characters had many readers thinking that comics should be regarded more seriously.  Despite the slapstick simplicity of the general premise, the detail combined with Herriman's visual and verbal creativity, made Krazy Kat one of the first comics to be widely praised as "serious" art. 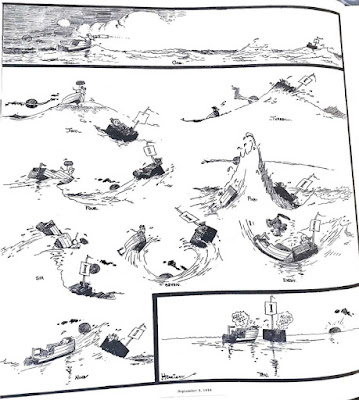 Krazy was animated and brought to the movie theatres in 1916 and had many incarnations.  Now this is speculation, but I truly feel that Krazy influenced the creation of Felix the Cat, who reached the screens in 1919.  Felix was an inspiration for Disney’s Oswald the Rabbit and then Mickey Mouse.  If you look at their early incarnations they all look alike.  So Krazy played an important part in American culture.  (Feel free to disagree.) 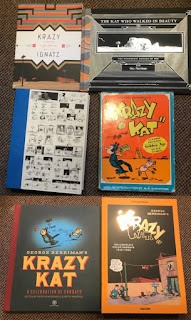 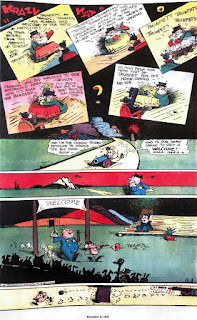 Collected Krazys have appeared in many books, some of which (from my own personal collection) can be seen here.  The one marked “Early” is from the Dingbats.  Another one was hand water-coloured by Herriman.  Krazy Kat is definitely worth checking out. 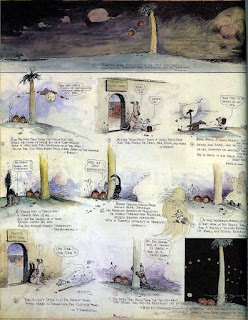 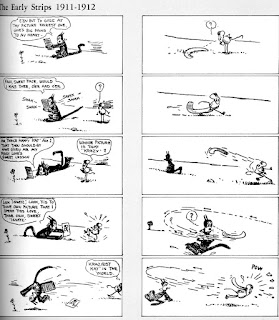 We live in a great time. We can enjoy the comics of today, but we can also collect the comics of a time gone by. Are there any old comic strips you would like to collect? What were the ‘big’ ones in Great Britain?

Lobey Dosser was a famous Scottish cartoon strip, BP, as was Angus Og, then (UK) Bristow, Andy Capp, The Perishers, Jane, Garth, and we even get US ones like Calvin & Hobbes, Hagar the Horrible, and Peanuts, etc. (Though I'm not sure if that one still appears in UK papers.) There are probably loads I've forgotten, but when I get a chance, I'll dig out my Penguin Book of Comics and remind myself (and you).

Speaking of Peanuts, check out this boog of mine, https://forbushman.blogspot.com/2017/03/charles-m-schulz-his-cartoons-without.html

Took a quick look, BP, but I'll have to revisit later to give it the attention it deserves. Right now I'm off to my scratcher. Had a hard day.

It is one of my favorite blogs.

Well, of course it is - YOU wrote it. I find that most of MY favourite blog posts were written by ME. An amazing coincidence, eh? (Yes, I'm known for my modesty.)

I can remember seeing a Krazy Kat cartoon in the very early 70s at a movie. First and only time I heard and saw .It looked like a 40s era cartoon..

Yes if I wasnt so modest I would be perfect.

That and my humility, LH.

Been reading collected Krazy forever. Herriman's work was sublime . The enchanted mesas of the south west are beautiful and Herriman!s use of words was poetry . Also I too had the Penguin book of comics now long since disappeared . Read it many times.

When I was young I believe I saw the cartoons on local TV stations. The only sound was music, there was no dialogue as I remember.

Don't recall whether I ever saw any Krazy cartoons on TV, only in books about legendary cartoon characters, BP and PS. One day I'll maybe track down some comics.

I remember some Krazy Kat animated cartoons on TV in the mid-1960s. IIUC, they were part of a syndication package deal that included King Features-owned comic strip characters: Snuffy Smith, Popeye, and Beetle Bailey. I think June Foray and Paul Frees did the voices for Krazy and Ignatz.

I saw June Foray's name in the movie The Man Called Flintstone just a week or so back. I think she died not long ago.

Ms. Foray died in summer 2017, just two months before what would have been her 100th birthday.

In The Man Called Flintstone, she played the enemy spy, Tanya.

She was in a lot of Looney Tunes shorts, playing Granny in the Tweety & Sylvester series, and a witch named Hazel in some Bugs Bunny and Daffy Duck cartoons.

She also played a Witch Hazel in the Donald Duck cartoon, Trick or Treat.

In the Rocky & Bullwinkle series, she voiced Rocky, and yet another foreign spy, Natasha ("Look, Boris dahlink! Eet iss moose and squorrel!") She played Dudley Do-Right's girlfriend Nell, and George of the Jungle's girlfriend, Ursula.

Whenever you hear a little old lady, a cackling witch, or a seductive Eastern European femme fatale in a cartoon from the 1980s or earlier, it is probably June Foray.

George Herriman was born in New Orleans of Creole parents. If Krazy Kat is an allegory for diversity, he was well suited to rise to that challenge.

Yes I too recall seeing these on tv. You can find them on the inter web now. They weren’t very good but introduced me to the characters. Which was a good thing because Herriman’s work is awesome .

Mark Evanier was full of praise for her voice talents, TC, and full of admiration for her as a human being. Thanks for the info.

It would be interesting to know if it was Herriman's deliberate intention to champion diversity, H, or whether it was a later interpretation.

Now I'll have to read the few strips I have, PS. Anything that's awesome intrigues me.

You're obviously a fan, TC...did you know that June Foray also did some voice work on the original Twilight Zone series? She worked (uncredited on the shows themselves) on a couple of season 5 episodes, 'Living Doll' where she voices the vengeful toy (it's so old that Telly Savalas has hair in it - well, a little bit), and 'The Bewitchin' Pool' where she dubbed a child actress. On the season 5 DVD boxset she provides a commentary for 'Living Doll' and there's also a nice 12 minute interview with her on the extras disc - I assume these were ported over for the Blu Ray release? She must've been in her 80's in the interview, but looks great and is very enthusiastic about her career. I dunno if it's on Youtube, but you'd probably enjoy it if you haven't already seen it...