YOU CAN'T KEEP A GOOD COVER DOWN...

I therefore have the same cover image four times over in my collection (and that's only individual issues, not counting reprints in book collections), so thought you might like to see 'em.  You do?  Okay then - here they are.  Which version (if any) do you prefer, o conscientious Criv-te?  Feel free to tell us in the comments section. 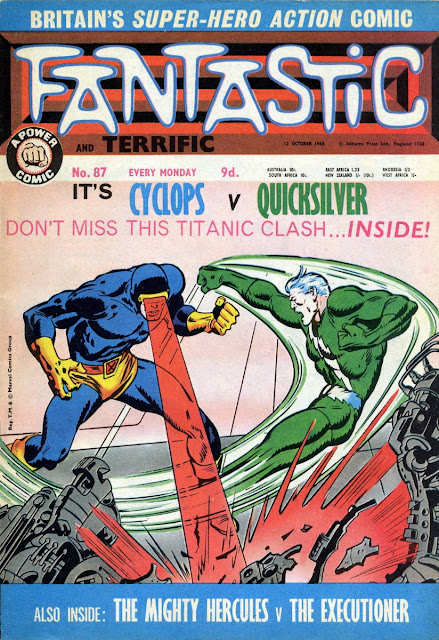 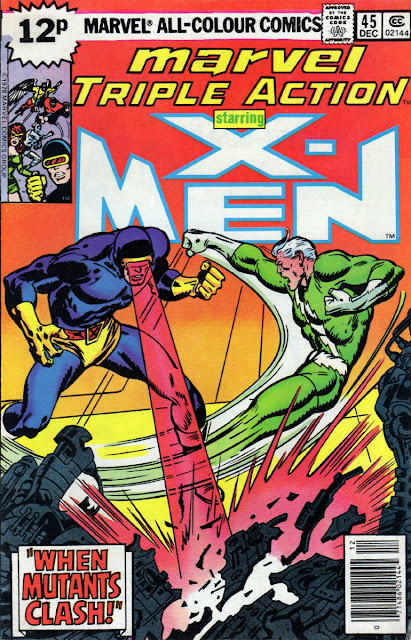 Interesting that X-Men #93 adds dialogue to the cover.

Probably just to keep it in line with other Marvel mags of the time, CJ, which I assume likewise usually had cover dialogue. (Too lazy to check.)

IIRC, in the 1970s, Marvel and DC mags routinely had dialogue on covers. Not always, but at least as often as not.

I had the American edition of that Marvel Triple Action. Same basic cover, but with a "35c" price tag instead of "12p," and "Marvel Comics" without the word "colour." Usually, MTA reprinted 1960s Avengers, but #45 reprinted that X-Men issue, because it tied in with Avengers #53, which was reprinted in MTA #46.

Similarly, Marvel Super Heroes ca. 1980 reprinted Tales to Astonish/Incredible Hulk, but one issue reprinted Avengers #88, as it was the first half of a two-parter that had concluded in Hulk #140.

I think I prefer the X-Men 93 cover, the colouring on Triple Action looks a little jarring to my eyes.

To go off on a slight tangent, any ideas as to why Marvel Triple Action was named? The title suggests it should be triple-sized or have three stories, as far as I know though it was always single-issue reprints. Marvel Double Feature, if I recall correctly, was being published around the same time and reprinted Tales of Suspense comics with two stories each, so that title makes sense to me!

Yeah, Marvel printed the US editions, then altered the plates to say 'Marvel All-Colour Comics' and show the UK price. There's a little note inside MTA #46 explaining what you just said as to why the X-Men were in the comic, TC - plus, as I said in the post, it also included 3 extra pages (inserted after the splash) to explain what had happened in the previous X-Men tale. Nice to hear from you.

I've got MTA #1, DS - it was a 68 page comic featuring The Avengers, Dr. Strange, and Daredevil, but obviously it switched at some stage (dunno which ish) to a regular-sized mag with just The Avengers, but kept the title. It tried to justify it for a while by naming 3 Avengers on the cover. Later on, the FF took over (in reprints), and it would name Dr. Doom, The Thing, and The Silver Surfer (for example), but eventually didn't bother. Nice to hear from you, too.

I didn't know MTA's first issue had been 68 pages, makes sense now! I seem to remember owning an issue with a reprint of a Thomas/Buscema Avengers issue - think I bought it in a stall in the old Argyle Market. Been working crazy hours recently, so haven't been online much, but have enjoyed catching up on Crivens today. Hope all is going well with you, Kid.

There were two issues of Giant-Size Marvel Triple Action in 1975, each 68 pages and with three stories (Avengers, Dr. Strange, and Daredevil). My guess would be that it was originally planned to have that format permanently, but maybe budget cuts forced it to reduce page count, meaning that there was then only room for one feature (either Avengers or FF).

MTA ended in the late 1970s, but the Avengers reprints continued for a while in Marvel Super Action.

Thanks, DS, things are hard going to be honest, because of looking after someone, but others have it worse so no point complaining. I think I remember that stall in the ol' AM, but whether I actually bought anything from it is another matter. I think I might track down some more issues of MTA.

Funnily enough, TC, after I replied to your first comment, I went on to ebay to look for the title and noticed that the only other 68 pager was #2, so I suspected there were only two. It was one of the series of 'Giant-Size' mags that Marvel did at the time, none of which lasted long. I think I've got the first ish of the 2009 version, and I've definitely got the first issue of Marvel Super Action.

I’ve heard it was the exact opposite that the UK prints were done first . Does anyone know for real?

The version I read definitely said that the US run was printed first, then the plates were modified, PS. And going by how clumsily it was sometimes done, I'd say it was pretty obvious that the UK versions were printed second. The cover art would've been produced with the American price first, as can be seen by the fact that it fits the boxes or blurbs better, whereas the British price and 'Marvel All-Colour Comics' banner have clearly been dropped in afterwards. So I'd say I know for real.

Also, the print run for the UK would've been far smaller than the US and Canadian one, so it makes more sense to do the larger run first. And remember, in the '60s, the month was omitted from the cover because the mags went on sale over here much later, and it would be quicker and easier to blank the date out than to add it.