In 1971, MARVEL FEATURE #1 was released, giving the world The Dynamic DEFENDERS.  I recently gave you a look at the new facsimile edition of the comic, but I thought I'd show you some more related stuff from my collection.  Below is the splash page (which you also saw in that earlier post) of the debut tale.  I've left out the splash pages of the two back-up strips as I displayed them in that same earlier post, but I included the cover again, above (which you'll already have noticed, natch). 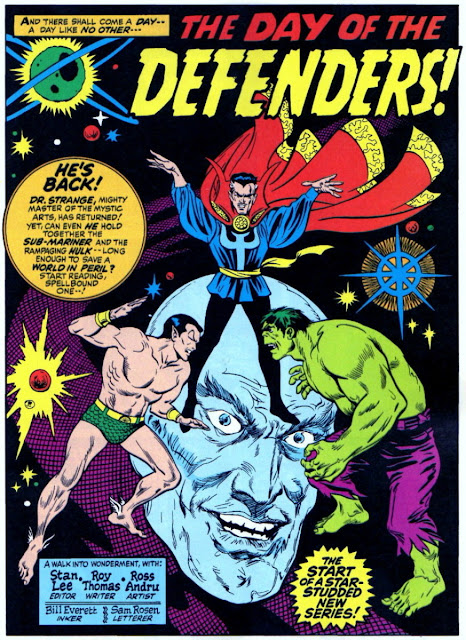 Next (below), the cover of the second ish, followed by the splash.  I believe I've got a '70s issue of The MIGHTY WORLD Of MARVEL with the same cover, when the story was reprinted within its pages over three issues (maybe - not sure).  The main tale was 28 pages long, with a back-up tale called The HIDDEN WORLD, which was a reprint from SUB-MARINER COMICS #36 (1954). 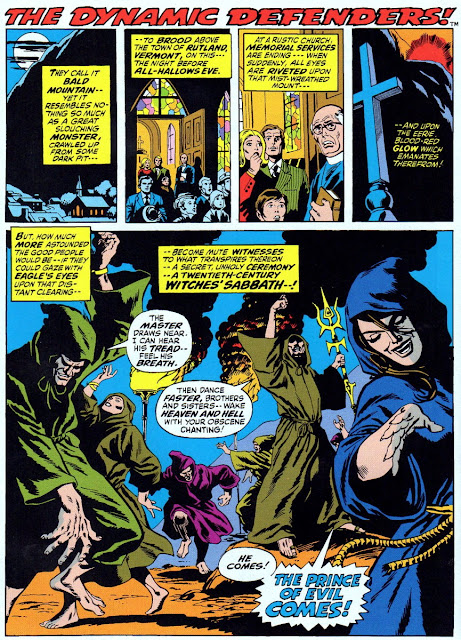 Below we have #3, which was back to a standard 36 page comic, the previous two being 52 page (counting the covers) extravaganzas.  MARVEL had decided to give their mags more pages and content, but abandoned the plan after only two issues.  DC COMICS, who'd followed Marvel's example, didn't reduce their page count until several issues afterwards, and their sales had apparently dipped in the meantime. 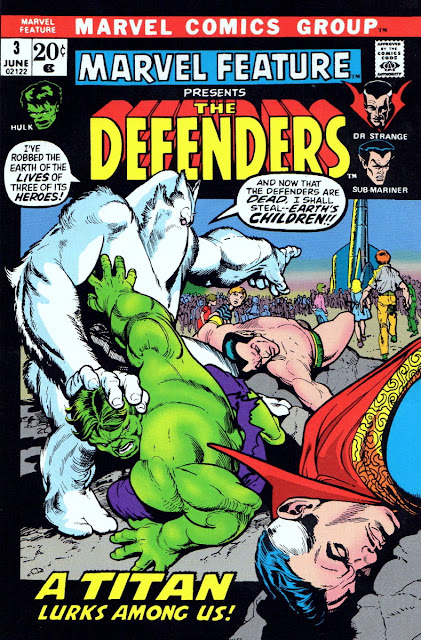 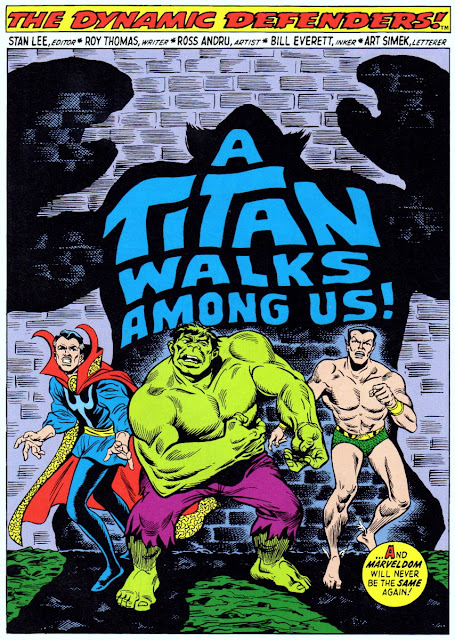 Number three was The Defenders last appearance in the title, as they soon got their own comic a couple of months later.  Marvel Feature lasted 'til #12, starring ANT-MAN from issue 4-10, with The THING teaming up with The HULK and IRON MAN respectively for the final two issues.  Ol' BENJY then got his own series in a new title, MARVEL TWO-IN-ONE, two months down the line. 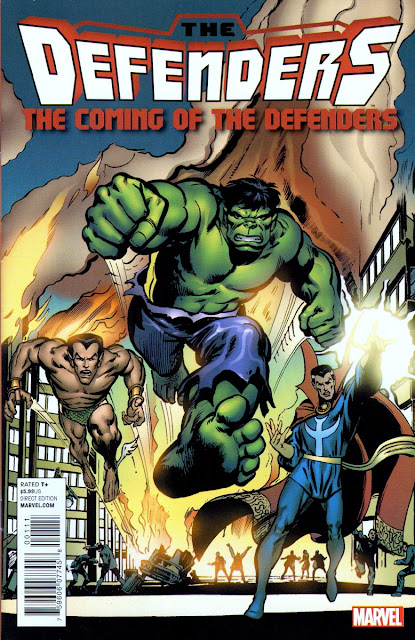 The COMING Of The DEFENDERS (above), which came out in 2012, reprinted the first three issues of Marvel Feature, and is where the scans of them in this post come from.  I didn't know about it at the time, and it only came into my possession today.  Glad to see it sporting the original NEAL ADAMS cover art, this time coloured by MATT MILLA. 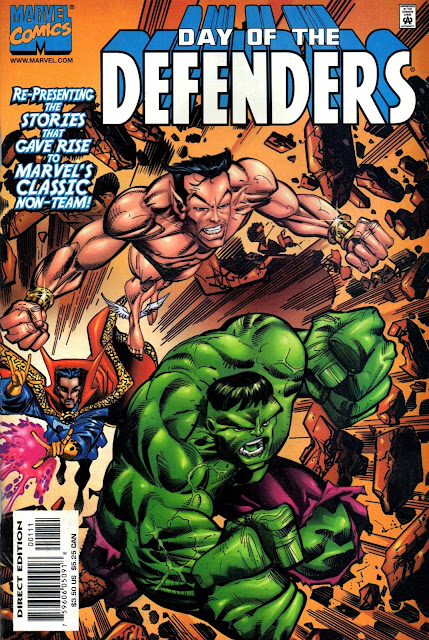 In 2001, Marvel published DAY Of The DEFENDERS (above), which as well as the first Defenders tale (the splash of which I haven't repeated as it's shown near the top of this post), also featured two 'prototype' Defenders tales, which are purported to have given rise to the regular series. 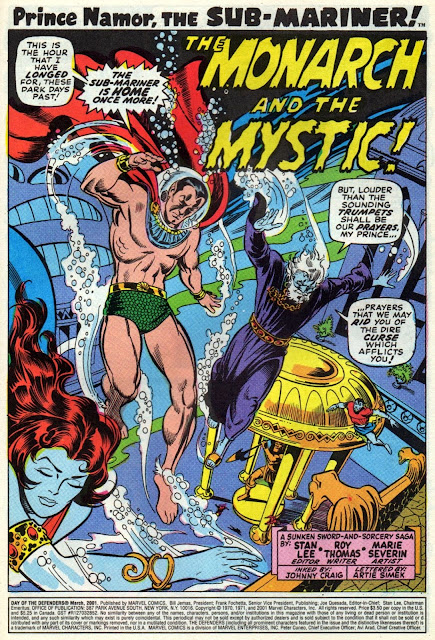 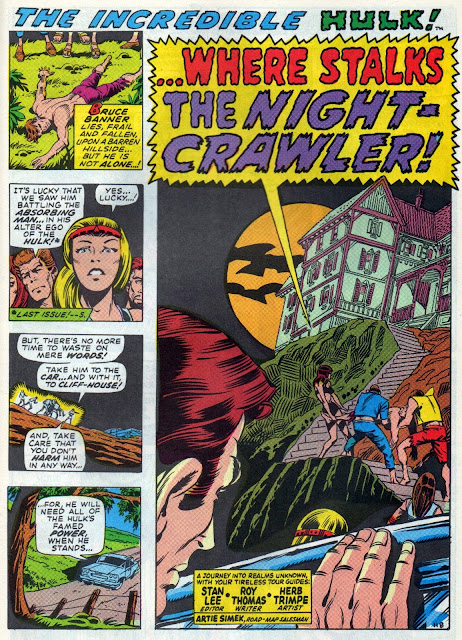 And just to round things off, let's end with the cover to the facsimile edition, containing all three stories and all the ads from the 1971 comic.  It's a nice little (not so little actually) mag, which belongs in your collection if you're not fortunate enough to own the original.  Right, that's it, effendi - until I can come up with some other idea to bore the pants off you (figuratively speaking of course - unless your name is SALMA HAYEK). 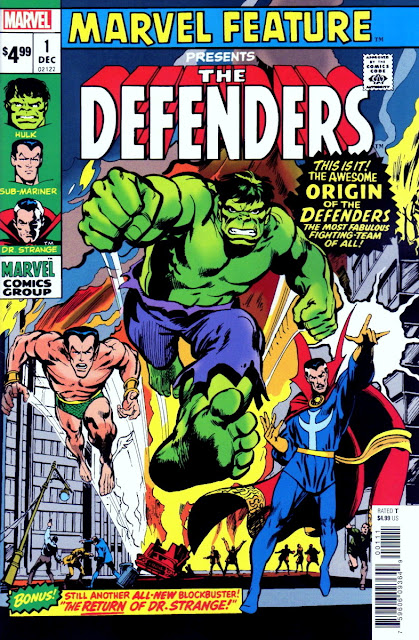 Oh, go on then - below are the two versions side-by-side for an easier comparison. 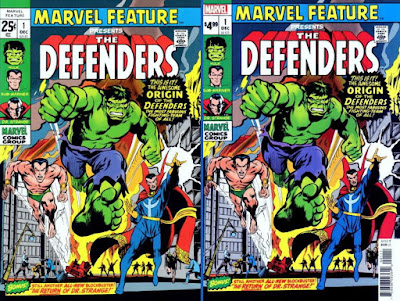 I own this comic a few times. Despite that I had to pick up the facsimile, it was just a blast into a sweet sweet past.

Yeah, it's a great wee comic, RJ. I was surprised to see that it first came out in 1971, as I associate The Defenders with the late '70s, when they were reprinted in a UK weekly called Rampage. Obviously I knew that the original US mags would've been published before then, bit I didn't think it was as early as 1971.

Call me an outdated grump, but that computer-coloured version of #1's cover is a perfect example of why colour colouring is by and large crap. It's just mud.

I agree that it's a bit too muted, BS, but I think that's deliberate because, nowadays, the colouring in old comics is regarded as being a bit too garish. I don't think that computer colouring is crap per se, it just depends on who's doing it, I suppose.

MWOM printed the first two Defenders stories, CJ, to test the waters as it were. Rampage #1 had the story from Marvel Fanfare #3. Scary to think you're now older than your father was in 1977. (You are over 50, aren't you?)

I loved the first 10 or so issues of the US Defenders and it was my favourite comic at that time (well after Conan) but it started to get too weird for me with those human head on ape body characters etc. Glad to read others do not like the computer colouring as well as myself - I'm also not a fan of the new "mechanical" (or whatever its called) lettering it all looks the same now.

"Day of the Defenders" was published in Rampage issue 1 Colin, but before that it appeared in MWOM. I seem to recall Nova was the other strip in RAMPAGE weekly and it was the start of those awful free gifts like plastic aeroplanes

Ooops sorry Colin it wasn't Day of the Defenders in RAMPAGE 1 me bad!

Actually, PM, it was 'A Titan Walks Among Us!' (Marvel Fanfare #3) which was reprinted in Rampage #1. If you type Rampage into the blog's search box, you'll see for yourself. However, you're right about Nova being the back-up feature. The thing about computer colouring and lettering that irks me is that people who don't have the skill to do it by hand, can now do jobs that they otherwise couldn't do. Which is not to say that ALL computer colourists and letterers can't do it by hand, but quite a lot can't. Ah, the plastic aeroplanes - I remember them well. I preferred the posters.

Your comment was waiting to be published as I was typing my response, PM, which is why it's suddenly jumped in above my comment. Never mind, you got there in the end.

Rampage #1 was my 1st Marvel comic. I remember that 'Titan Walks Among Us' page so vividly, and my dad correcting my pronunciation. I thought it was Tit-an. I've always wished Marvel would put a Xemnu toy in a movie. I seem to recall he tried conquering the world via toy versions of himself. I like the idea of a villain becoming literally a plaything/collectible.

I've still got my original Rampage #1, OD, bought back in 1977 - and it's in better shape than me. As for Xemnu, he's sure to turn up in a movie someday - if he hasn't already (in the background somewhere). As you'll probably know, he was originally called The Hulk when he first appeared back in the '60s.

Oh I don't think any of us are in as good shape as we were in 77. My staples fell out ages ago, and my free gift is definitely not what it was.

I've still got my staples (as has my comic), but they're a bit rusty. Mine I mean, not the comic's.