By all rights I shouldn't have bought WARLORD.  I wasn't into war stories, and it must purely have been the fact that it was a new comic I could collect from number one which appealed to me, rather than the theme of the comic itself.  (It was the same with football:  I was never into it, yet I bought SHOOT, SCORCHER, and SCORE when they first came out as well.)  Launched in 1974, it  survived until 1986, and inspired IPC to publish their own version, called BATTLE PICTURE WEEKLY.

Warlord was first though, so for all of you who bought it at the time, here's a little pictorial reminder of the debut ish to whisk you back to the days of your childhood faster than you can say "Hey, where did my life go?"  Feel free to share any reminiscences in our ever-lovin' comments section. 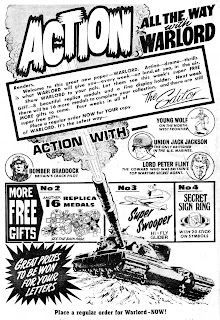 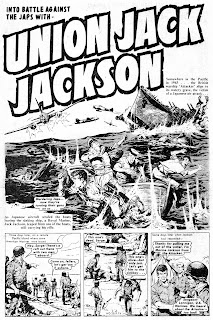 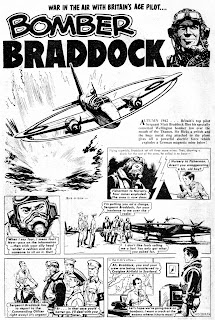 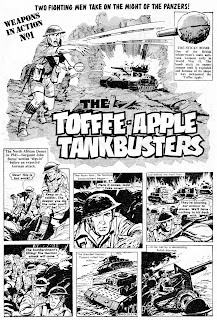 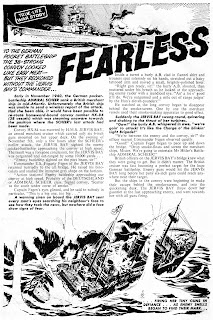 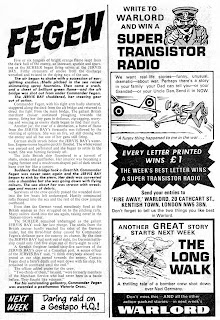 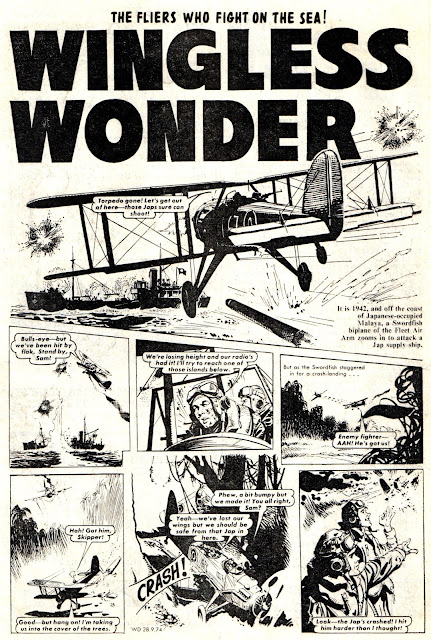 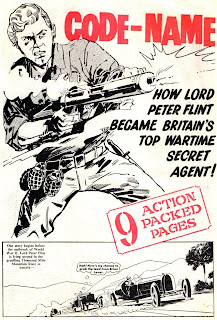 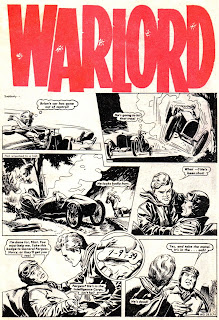 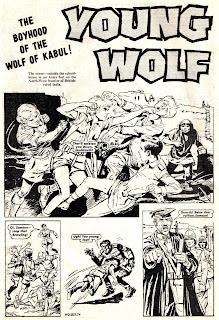 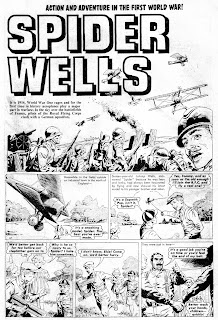 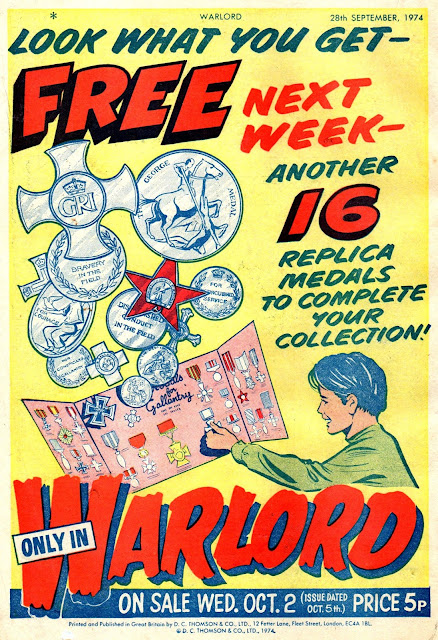 Those medals haunt me.
I bought this comic as well,free gift I suppose.
I did not like it at all.

But something struck me as I looked at the thumbnails/links on your blog,
The layout is pretty striking,especially the Code Name Warlord pages.

Victor and Hotspur also gave such medals away as free gifts, Baab. Remember that you can enlarge the images by clicking on them.

Today, publishers seem to be marketing to collectors, who want a new comic series that they can collect from #1. (And to investors, who expect it to become an expensive collector's item someday.) Publishers even cancel and reboot a series, so they can start over with a new #1.

In the Silver Age and earlier, marketing strategy was the opposite. They would change the title, or continue the numbering from a cancelled title, rather than publish an issue at #1.

Supposedly, #1 issues of new series did not sell, because they were an unknown quantity. The theory was that if a kid saw Flash #105 or Hulk #102 (Thor #126, All-American Western #103, etc.) on sale, he would assume it must be a good comic, having lasted for over a hundred issues.

Back then, though, most customers were kids who were casual readers, not collectors or speculators.

That's right. And some first issues of DC titles weren't numbered (if I remember correctly), presumably so that kids would think they were long-running titles. Panini, who publish Marvel reprints in the U.K. (and other places too, I think) frequently relaunch their titles from number one. Volume 6, number 1 of The Mighty World Of Marvel came out only a few weeks ago.

Oh my god. I remember those medals! I don't think I got all of them. I liked the U.K. War comics they had a distinctly British feel to them.

Unsurprisingly, that tends to be a factor of British comics, PS. (He said, waggishly.)

Typically patronising British comic "for boys" which assumed we all wanted to read about war and bloody football. At that time I was reading the Beezer and the Topper but only a few weeks later on November 16th I discovered my first ever Marvel comic - Planet Of The Apes #5. And talking of Panini - I discovered just yesterday that my local Tesco has started selling the Panini Marvels...or some of them anyway as I didn't notice MWOM. My local WH Smith's closed in 2014 so it's nice to see the Panini comics again !

Well, going by the fact that such comics sold well for decades, CJ, I'd say it was a fair enough assumption, even 'though I'm not particularly into war or football comics. Glad to hear you and Panini/Marvels have been reunited, but try and get MWOM - the last one was a new #1 and contains Dr. Strange.

Personally, I don't like the practice of rebooting titles and restarting them @ #1. It is confusing and totally unnecessary. You can start your collection with whatever your first issue is, if you want to collect every issue. That's what we did as kids. Back issues were unavailable, unless friends had them. Nowadays it's far easier to locate back issues, if you want to collect what you missed.
Anyway, thanks for giving us another pristine #1, Kid. I did have quite a few Warlords, but missed this one.

Not the full issue, alas, just enough to give you a taste of it, JP. I can only assume that restarting comics from #1 must give circulation a boost for a while, otherwise publishers wouldn't bother.