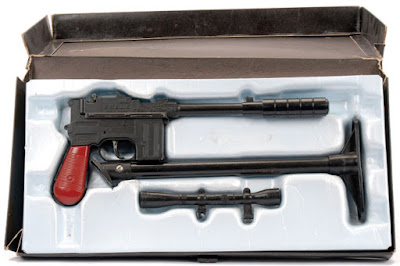 Look at the LONE STAR (I think) MAN From U.N.C.L.E. attache case I had as a kid, given to me by a paternal aunt and uncle for Christmas in the late '60s.  There were at least a couple of versions, of which this one was the cheapest as the case was only cardboard.  Not that I cared one whit about that, 'cos, to me, it was brilliant.
The case and contents eventually faded into the limbo that claims most childhood toys, but I still possess one of the bullets from the gun.  At least, it's a bullet I associate with the gun, which, in my memory, didn't fire caps as one would expect, but actual plastic bullets.  Perhaps my recollection is confused, not that it matters much, as whenever I look at that bullet, the above case is what comes to mind.

Ah, happy days.  What fun it was to be an agent of U.N.C.L.E. back in the '60s.  Do kids today have anything similar to such a great toy, or is it all computer games, mobiles, and iPads they go for now?

AFAIR, the only U.N.C.L.E. toys that I ever had were two Marx 6" soft plastic figures of Solo and Illya. I know (from online ads) that there were lunch boxes, Aurora model kits, and Gilbert "action" (i.e., articulated and movable, like G.I. Joe or Captain Action) figures.

Mattel had a line of spy toys in the 1960's called "Agent Zero M." Toy guns that could fold up to be disguised as harmless objects to fool the bad guys. As Maxwell Smart would say, "Ah, yes. The old pistol-disguised-as-a-camera trick."

I don't remember seeing any toy guns in the sixties that were tied in directly with any specific spy-fi movie or TV series. Recently, I have seen ebay ads for Airsoft guns based on the MFU Walther P-38 and the Bond Walther PPK and P99.

I remember the Zero M toys, TC, but I never had any. In fact, I may only have seen ads for them in American comics, not the actual toys themselves. In the '60s, there were Daleks guns, Fireball XL5, Stingray, and Thunderbirds guns - and loads more. They weren't all cap guns 'though; some were water pistols or dart-firing pistols. They're worth a small fortune today.

Hi Kid,I also had the same Man From Uncle kit.Did it come with a silencer or am I thinking of the 007 gun
I also remember the Man From Uncle badges .One of the coolest badges for a child of the 60,s to have.Great memories

Yup, the gun had a silencer which you can see attached to the gun in the picture, but it was detachable. I had a plastic badge as well, although I bought it separately. The more expensive version of the case (probably by another manufacturer) came with a badge, ID card and 'walkie-talkies', if I recall correctly.

I do remember looking longingly at the more expensive version in a Woolworths store,but alas my parents would not part with that much money.But great memories of a fantastic childhood,the Gerry Anderson shows !Rawhide,The Saint and all those super cool toys.A place I can never return to,unless a certain Doctor whose in possession a time machine could help me out?

I'm sure if you asked him nicely...? Having said that, I find photos serve a similar purpose to a time machine in that they reunite us with our past, even if it's only in the land of memory. (Of course, it's better if you own the actual item.)