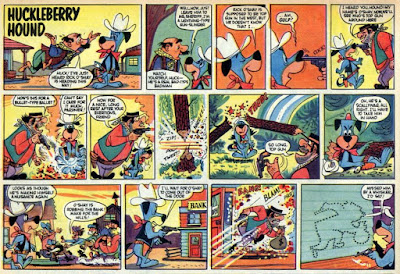 Time for another page from TV EXPRESS WEEKLY, featuring HUCKLEBERRY HOUND and YOGI BEAR.  The comic eventually merged with TV COMIC, in which some of the full page Yogi strips were reprinted in black and white quite a number of years later.  Whether any of the other HANNA-BARBERA strips likewise made a re-appearance, I couldn't say.
Posted by Kid at Saturday, September 26, 2015