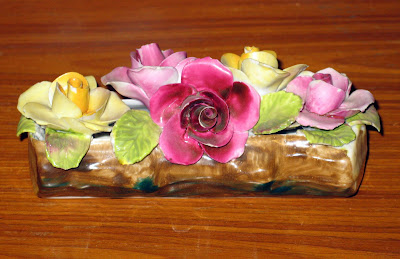 Looking back and trying to place events in their proper time frame years after the fact can sometimes be a difficult task.  When we're able to associate a particular incident with a specific, cover-dated periodical (for example), the job becomes a lot easier;  however, without such an aid, accurate attribution of when things occurred can seldom be an exact science.  Unless one has a meticulously recorded diary, that is - and all too few of us do.


The event I am about to share is insignificant in the great scheme of things;  as is so much of what we regard as important to ourselves, and which we often imagine, in our vanity, to have far-reaching implications of immense profundity beyond our own finite sphere of influence and existence.  Don't we all consider ourselves, subconsciously (unconsciously even), to be the centre around which the entire universe revolves?  Of course we do.  And it's the occasions when we're reminded that such is not the case which often cause the biggest frustrations in life.


The following recollection is one of immense triviality.  (If such a stark contradiction in terms can be permitted.)  It is a tale of no consequence, banal, mundane, uninteresting - to anyone but myself, that is.  I offer it in the hope that you may be able to relate to it, inasmuch as it may remind you of a similar circumstance in your own life, and that you may take comfort from the fact that you are not so removed from the common condition of humankind as you may sometimes think (or fear).


When I was a boy, my parents had a porcelain ornament which I took note of almost as soon as the power of sequential thought and memory first dawned within me.  It was a little log, on which pink and yellow petals, underscored with green leaves, were arranged in a splendoured-display along the glazed brown bark which gave home to them.  I was probably only about 3 years old when it first introduced itself into my consciousness.


The seasons passed with regular inevitability, so let's now jump to either 1970 or '71, when I was in my first year at secondary school and aged about 11 or 12.  I was also two houses removed from the one in which this particular ornament had first come to my attention.  Even at that young age, it represented a link to my cherished past which I was reluctant - nay, unable to relinquish.  I lived in and for the past;  I 'looked back' to such an extent that I should have turned into a pillar of salt long before ever reaching the age I then was.


One night, by prior arrangement, two classmates (who'd invited me to a youth club in the school across the road from the one we attended) called in for me.  I'd previously been a member of the Boys' Brigade in this school some years before, and was looking forward to reacquainting myself with its interiors.  The two lads were STUART MacDONALD and AIDEN DICK (wonder if he had a brother called 'Tiny'), and when they rang the front doorbell, in my haste to put on my jacket, a flapping sleeve knocked the small ornament from its place atop the wooden fire-surround, whereupon it smashed to pieces on the tiled surface below.


I was dismayed and my parents were understandably annoyed, but with the callousness of youth, I suppressed my guilt (a temporary condition) and made my way with my two companions to our destination.  As it turned out, I didn't stay long at the club;  a combination of melancholy at unwittingly destroying the glazed log, dissatisfaction with the club itself, and anger at finding that the dastardly-duo had only invited me along in order to try and swindle me out of my entrance fee.  (An attempt that was doomed to failure.  They would have needed the A-TEAM to accomplish that - and they weren't around back then.)


I never forgot that ornament.  The years passed and I grew to adulthood, but, periodically, I would recall that night and cringe with shame at my part in the little log's destruction.  If ever I was at a Jumble Sale or Christmas Fayre, I would keep an eye out for one to replace it - but I was never successful in my aspiration.  It must have been about 32 or 33 years later that I saw its double in a charity shop, and - despite the unrealistic price that such establishments seem to place on much of their stock these days - I readily handed over my cash.


Well, I've had that replacement for around 9 years now.  I look at it every so often and my guilt at the murder of its twin is assuaged somewhat - though never completely.  It's strange to think that most of my life has been lived in its absence, because now that its doppelganger graces the same shelf-space the original would have occupied had it survived, it's almost as if history has been magically rewritten to include it in my memories of the time when it wasn't around.


Needless to say (but I'll say it anyway), it's a good feeling to be reunited with a familiar object from childhood and I derive a mixture of comfort, pleasure, and satisfaction from its presence.  It's as if I've redeemed myself (however slightly) for some heinous sin, the shame of which has haunted me for most of my life and from which I thought I'd never be free.


Is there a moral to this story?  Or even a point to it, as some of the more critical amongst you may be wondering.  I'm sure there is, even if it's as difficult to articulate as providing precise dates for the foregoing events is elusive.  However, my work is done.  I've given you the clay;  'tis now your task to reflect, to ponder - then fashion it into whichever shape you think may serve you best.
Posted by Kid at Wednesday, October 24, 2012

Nice story (sort of), but yep, I can relate. There's three plaster dragons that were ALWAYS around, but they were left behind in a rushed house move about five years ago.

I kept putting off calling back at the old house to see if the dragons were still there, and now obviously it's too late.

Now, whenever I'm indoors and the wind and rain are battering my windows, I look around the flat and see that all of my stuff is safe and dry - everything but those dragons. Who knows where they could be?

You may find this story (similar to what you describe) somewhat interesting. The title is 'Old Balls Please' and the link is http//kidr77.blogspot.com/2010/08/daft-little-story-for-you.html