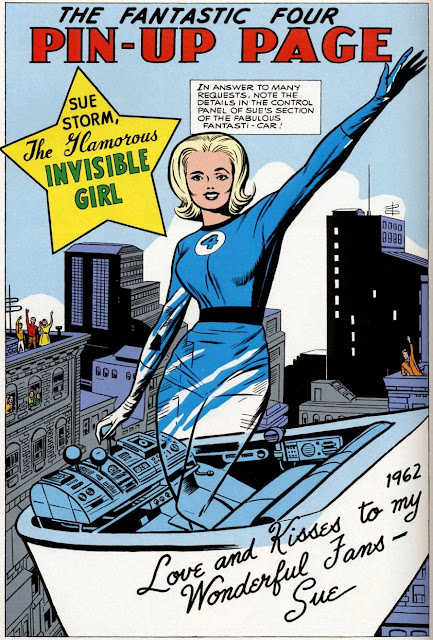 The above pin-up first appeared in THE FANTASTIC FOUR #10
in 1962, although I first saw it in FANTASTIC #17 five years later.  As a
boy I had quite a crush on SUSAN STORM, which is more a testament to
JACK KIRBY's ability to draw attractive women than it is to what a strange
kid I was.  (At least, that's my story and I'm sticking to it.)  Alas, it was not to
be, and Susie married some geeky scientist who wasn't good enough for
her.  Women, huh?  Who can understand them?  I'd have treated her
like a princess.  (Gotta go - it's time for my reality pill.)
Posted by Kid at Monday, October 08, 2012

Have to admit I liked her best as portrayed by John Romita - those being my first issues of FF may have something to do with it.

I liked the Romita and Buscema portrayals as well.

The Invisible Girl? I don't know what anyone sees in her myself.