THERE WERE THESE TWO WARRIORS...

Back in 1982, a new monthly magazine hit the shelves - WARRIOR!  The brainchild of DEZ SKINN, the name was recycled from a fanzine he'd produced in 1974, but we'll get to that shortly.  The first issue of the '80s mag featured the revival of MARVELMAN, originally published by L. MILLER & SON, and a copy of FAWCETT's CAPTAIN MARVEL.  The substitution was necessitated when Fawcett cancelled the 'BIG RED CHEESE' following a lawsuit by DC COMICS (N.P.P.), and as Miller had been reprinting the Marvel Family stories, a ringer was required PDQ.  MICK ANGLO (artist of Marvelman) always freely admitted that the character was an outright imitation of Captain Marvel, which makes me wonder if DC Comics, who now own Fawcett's SHAZAM character, could launch a plagiarism suit against MARVEL COMICS, who now own Marvelman?  Time will tell, but that's a subject we're not going to explore here.

The new Warrior also saw other great strips among its pages, such as V For VENDETTA, and LASER ERASER And PRESSBUTTON, and featured the cream of Britain's adventure artists of the time - such as GARRY LEACH, STEVE MOORE, DAVE GIBBONS, JOHN BOLTON, DAVID LLOYD, and STEVE PARKHOUSE.  The writing duties in the debut ish were performed by the likes of ALAN MOORE and STEVE MOORE (no relation, but good pals), with other writers penning various other strips throughout its 26 issue, three year run, during which time it won 17 EAGLE AWARDS.  Distribution was spotty, because I only ever managed to get the first several issues before it disappeared from view in my local shops, and going from what other readers have subsequently said, it was the same for them.

Anyway, here's a few pages from that first issue, after which we'll take a look at the original incarnation of the title. 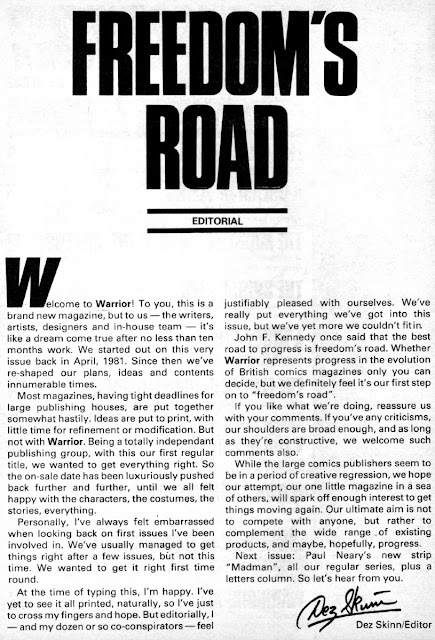 Enjoy the pretty pictures?  Good!  That's not something that can be said about the '74 incarnation, which lasted for six issues into 1975.  Not that the art wasn't good, because it was (how could it be otherwise with artists like JOHN M. BURNS, DON LAWRENCE, FRANK BELLAMY, and TOM KERR?) - thing is, the reproduction in most cases wasn't.

It was unavoidable I suppose, when it came to colour art reprinted in black and white, but even original b&w pages didn't come out too well, and it's hardly surprising that the mag was short-lived.  'Twas a brave try though, so Dez should be given a pat on the head, a BLUE PETER badge, and an extra-big bag of JELLY BABIES for his efforts.  There's no point showing you the duff pages here 'cos they'll only hurt your eyes, but I've included pages from a couple of strips that are slightly clearer than the others.  ERIC The VIKING from SMASH! was originally KARL The VIKING from LION, but that's perhaps a tale for another post.

Did you buy either of the two mags back in their respective times, and if so, got any memories or observations that you'd care to share with your fellow Criv-ites?  If the answer to that is yes, then the comments section awaits your esteemed presence. 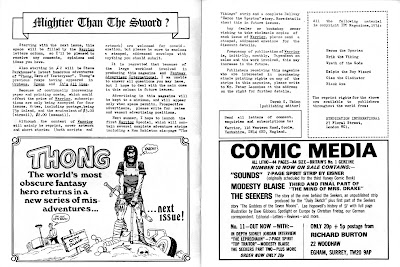 I always thought the original Warrior was just a comp that Dez put together. It was an actual real mag? I want it now, bad art or not!
As for the '80's Warrior, what a great book that was. I must've had better distribution round my way, 'cos I no problem getting every issue.

Searching my mind, PD, I suspect that I missed a few issues because of patchy distribution, then gave up on the mag because of that - even when it popped up again. I think I got the first four or five, and the last one I saw (which someone gave me) was the November '83 ish, #15.

You've got them all now though?

They're worth getting for sure. As for me, I'm off to locate the 74/75 versions!

I've got most if not all of the Marvelman strips it contained (in reprints), so that'll do me for the moment. Like I say - maybe one day. Good hunting.

True, most of it's probably in reprints by now.

And in colour. Shame about the name-change though.

Kid, you've said you bought No.1 of Marvel's new Conan so have you read it yet? Are you planning a review of it? I'd be interested in your opinions of this landmark event.

There are two new Marvel Conans, CJ - CTB and SSOC - and I'll give you a review of both of them right now: Thoroughly enjoyable! Track down the first and subsequent issues on ebay.

Great to see the original Warrior I had heard of it but never seen it, I wasn't aware it was full of old UK reprints. I enjoyed Warrior (the 80s version) which was available in my neck of the woods (only a few miles from you) but I was getting a bit fed up with comics at this time and only picked up a few issues after issue but it was a brilliant book.

It had great art, PM, but I think only Marvelman and V for Vendetta grabbed me storywise, the other strips being not really my cup of tea. Having said that, as I only read a handful of issues, that probably wasn't enough to give me a full taste of what they were like, as some strips need a longer time to develop.

I somehow missed Warrior during its original run....my first copy was #22, snatched eagerly for the Frank Bellamy interview (examples of his work were hard to come by in those days)....managed to keep an eye out and get he rest over the following years.

There are other comics I need to acquire first, BS, but I may well follow your example with Warrior one of these days.

I discovered the first issue of Warrior ( 80s version ) in a newsagent's in Bournemouth and was absolutely knocked out by it. There had been a few valiant attempts at a similar kind of British comic magazine before ( Near Myths, Pssst! etc. ) but Warrior was the real deal. I somehow managed to find every issue except for #5, so missed the last Garry Leach episode of Marvelman. ( Eventually read it in the American reprints where it was ruined by terrible colouring. ) Warrior was a great magazine and came along at just the right time for me as I was losing interest in most other comics of the time.

I enjoyed the few issues I bought, Cer, but I was more interested in John Byrne's FF and Marvel Tales' Ditko Spidey reprints at the time to be too bothered about tracking down further issues of Warrior I couldn't find in the local shops. My loss perhaps, but Marvel wins out every time with me (it did back then anyway). Still, it certainly made an impact on the comics-buying public.