ARE YOU READY FOR YOUR CLOSE-UP, COMMANDER ZERO...?

Recently obtained this THUNDERBIRDS Annual for 1967 (released near the end of '66, and with a cover by FRANK BELLAMY by the looks of it), and was pleasantly surprised to see throwaway cameo appearances by COLONEL STEVE ZODIAC, COMMANDER ZERO, and COMMANDER SHORE (who, strangely, looks like he's standing up and not in his hover-chair).  Only Zero is mentioned by name, but it's obvious (if you're a fan) who the others are.  The cameos are completely unnecessary to the plot and could easily have been three unknowns, but it was nice little touches like this that gave gave the stories that little something 'extra' which readers so enjoyed. 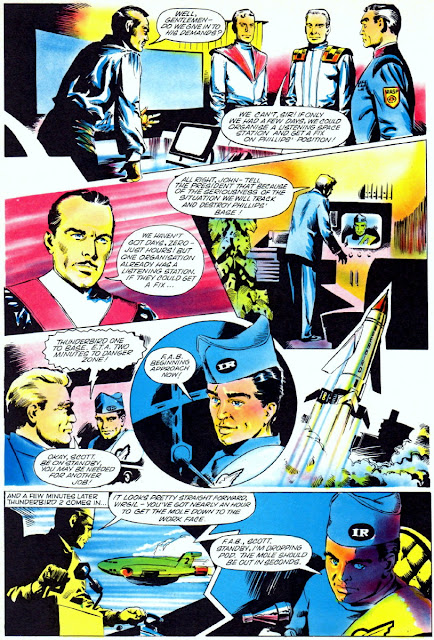 Of course, the GERRY ANDERSON TV shows didn't really share the same time-line or continuity, but the TV CENTURY 21 comic strips set in the future did, thanks to editor ALAN FENNELL realising the storytelling potential of a 'shared universe' and such crossover appearances.  In fact, some of the comic strip plots contradicted events in the TV shows, but it probably went over the readers and viewers heads at the time.  I seem to remember reading somewhere that the Annuals were edited by someone other than Alan Fennell, which, if so, might perhaps explain why the art, though good, wasn't of quite the same high standard as of that in the weekly TV21, but maybe it simply had a higher budget than the books - anyone know for sure?
Posted by Kid at Sunday, March 10, 2019