Remember the BATMAN craze of the '60s?  TOPPS published a set of cards to cash-in on the interest that the TV show had incited, and to anyone who had them back in 1966, the above and below images will surely bring back happy memories of their childhood.  A further two sets were released after the first, and - fortunately, for people like myself who never kept the originals - Topps reissued them back in 1989 when the TIM BURTON/MICHAEL KEATON/JACK NICHOLSON big-budget Batman movie hit the screens.

What amazes me is that the reissue came out around 30 years ago, whereas there was only a 23 year interval between them and the originals.  That means I've now owned the reissued cards far longer than I would've had the first set, had I kept them (which I didn't) until the new ones came out in '89 - yet it doesn't seem like anywhere near 30 years ago since I acquired them.  In fact, sometimes it doesn't even feel like it was 53 years ago since '66 - other times it does, alas.

Incidentally, in case you were wondering about the contrived title, it alludes to BOB KANE and BILL FINGER, the men who brought Batman to four-colour comicbook life back in 1939. 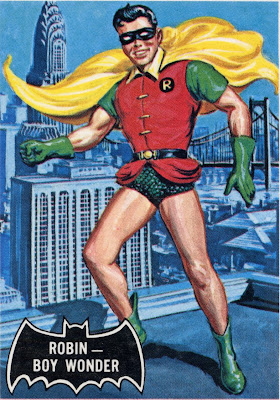