The DANDY first appeared 80 years ago in 1937 and ended its run 5 years ago in 2012.  There's no arguing with the fact that a 75 year life-span is a great achievement for a comic, but why did it die?  Forget what you read elsewhere from people determined to rewrite history - The Dandy came to an end because it eventually failed to appeal to a large enough readership to sustain itself.  Simple as that.  But there's more to the story.

Immediately after its 2010 relaunch, it actually increased its circulation for a short time before dissatisfied readers simply lost interest and stopped buying, leaving newsagents with no option but to reduce their orders accordingly.  Sales had been in general decline for years, but what killed the comic at that specific point in time was that it failed to deliver the goods.  A few exceptions aside, bad art and poor stories meant that readers old and new abandoned the comic in droves.  You can forget talk about all those who enjoyed the new Dandy as proof it was great.  Remember, they were in the minority - the majority voted with their feet (and their wallets) and walked away.

Yet still a few deluded former contributors persist in perpetuating the myth that the relaunched Dandy was absolutely brilliant and deserved to succeed, and that other factors were mainly responsible for the comic's cancellation.  (Being hard to find on the shelves apparently.  Well, not in any WHS I was ever in.)  The facts speak for themselves.  The 'great save' designed to rescue the comic from oblivion failed.  That's the important thing to remember here - the relaunch ultimately proved to be inadequate and the wrong direction in which to go.  DCT themselves never denied that the comic lost around half its readers - only some  disgruntled contributors and fans have tried to put a different spin on the facts.

If you're a singer and only manage to sell a fraction of the available tickets - and then half the audience walks out during the show, to deny that the songs you sing and the way you sing them is most likely the primary reason for such a sorry situation is ludicrous.  Yet that's what the apologists for The Dandy's failure claim - it wasn't the content, it was everything else but, they say.

Anyway, you can safely ignore their deluded witterings, secure in the knowledge of the facts.  However, let's not dwell on The Dandy's demise - let's take a look at some pages from its very first issue from 80 years ago.  It was still to achieve the greatness for which it became acclaimed in its heyday, but it's interesting to see it take its first steps on that journey into legend. 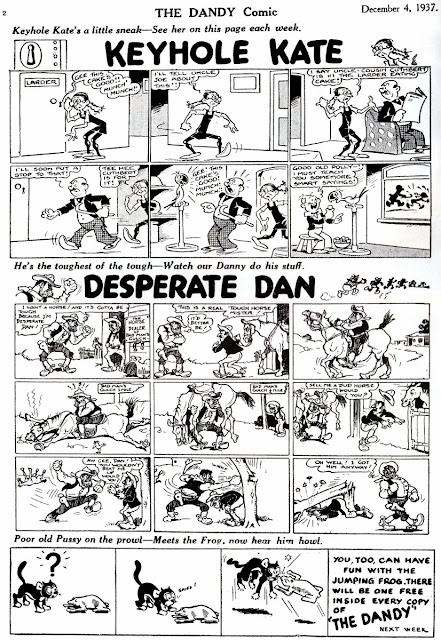 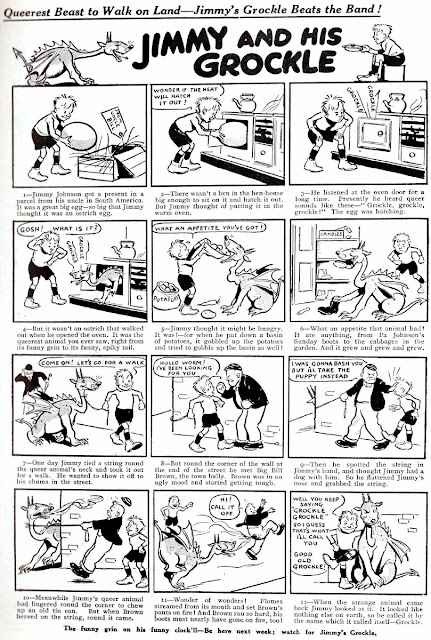 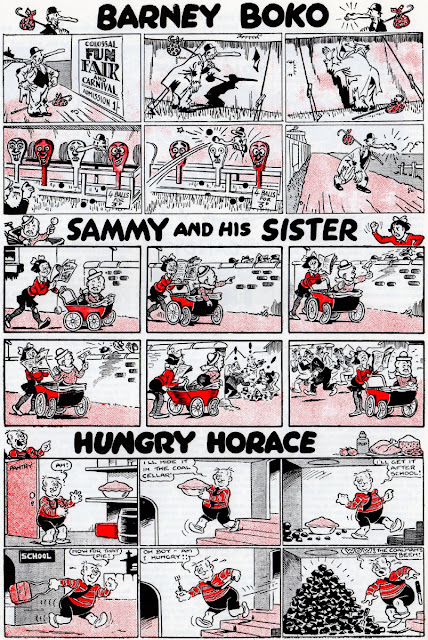 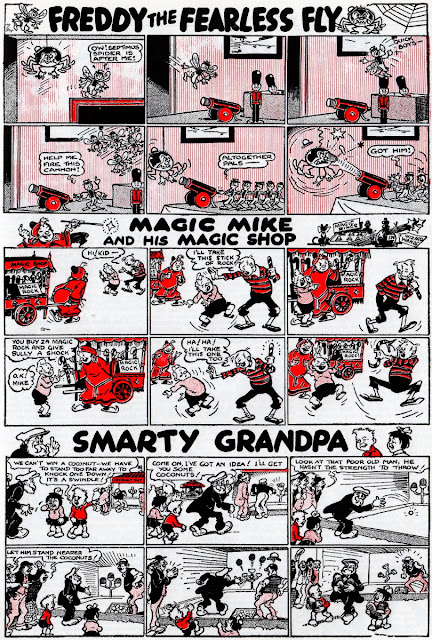 I can cross that one off the list now.
No - not saying anything bad about The Dandy. After all, i haven't read the revival issues. I was referring to that push we discussed previously to catch all those anniversaries before 2017 was over.

I don't have any of The Dandy from this century, but i much enjoy the old issues. It's hard to recollect with certainty, but i believe it was the first of the old magazines that started the comics on the front in lieu of a cover. I remember that at-the-time oddness drawing me in to read it instead of the other books nestled in the box with it. That one issue was enough to make younger me start looking for more of those old anthology titles. I wonder what issue it was?

Funny how much more i like Smarty Grandpa these days.
But, let me tell you - I was terribly disappointed when i went to see the movie Magic Mike.

But the Dandy annual survives - the 2018 annual is on sale in my local Tesco.

The only thing that took my interest in the Dandy was The Umbrella Men in 1966 . After something like 30 episodes it disappeared..

A fascinating look back. Thanks Kid. A shame about the relaunch.

If you're ever going to start collecting issues of The Dandy, 3, you can safely give the 2010 relaunch a miss (and the Dandy Extreme one before that). It was painful to see its sad decline. You should check out Kazoop on my bloglist - Irmantas covers scores of old UK comics.

They need to keep the Annual going, CJ, to exploit the merchandise potential, but it probably sells well enough to ensure its yearly appearance. So much for that great new life on the Internet, eh?

I never really bought The Dandy or The Beano regularly when I was a kid, LH, and when I did, it was usually because they had a free gift (back when the word 'free' meant free), or because I had only enough pocket money left to afford a cheaper DCT title. They were nice little comics though.

Once Corporal Clott stopped, that was it for me.

They were clotts for stopping it, that's for sure, CN.

They should have kept it going as a monthly or quarterly. It was stupid to stop it.

Trouble is, if not enough people are buying it and the comic is losing money, then, from their point of view, it's not worth keeping it going. At least there's still the Annual every year (and the occasional Special) - that's some consolation.