Tell you what - let's use the Crivens' time machine to go back to December 1950, a whopping 67 years ago.  Hands up if you were around back then - no?  I see - not admitting to being that old, eh?  Anyway, here's the DAN DARE instalment from what was regarded as the very first Christmas issue of the famous EAGLE comic, which lasted an amazing 19 years before being merged into LION.  If I remember correctly, Eagle was only around 9 issues short of its 1000th issue, so it's a shame that the publishers didn't allow the paper to celebrate that milestone number.  Sort of reminds me of WHIZZER & CHIPS, which lasted one issue past its 21st birthday, unheralded, before being merged into BUSTER.  Perhaps it was considered pointless celebrating a longevity which was coming to an end, but I think it would've been nice to mark the occasion.

Anyway, enjoy Dan Dare's first Christmas from 67 years ago, in the future of the past.  (Oh, profound or what?) 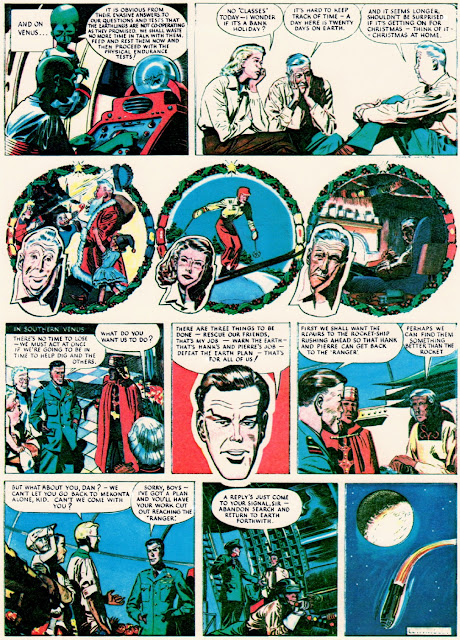 My sister read 'Judy' and 'Mandy' and around 1979 Judy reached its' 1000th issue. When it reached No.999 I assumed the next issue would be a big celebration of the 1000th issue but the next week came and...nothing. Judy No.1000 made no mention at all of the big milestone!

Strange that, eh? I wonder if girls comics (no apostrophe, because I'm not denoting ownership, simply referring to them as publications FOR girls - thought I'd better explain that) tend to celebrate anniversary issues in the main. You'd think they would, eh?

Kid, it's not polite to mention a lady's age so maybe they kept silent about Judy reaching 1000 :)

That no doubt explains their reticence to celebrate, CJ. Apparently it's also not polite to mention a lady's fat bum either.