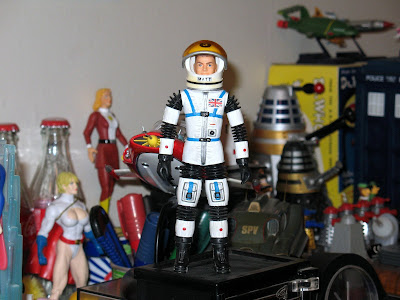 Here's something I bet you won't have seen before, Criv-ite chums.  "What are you babbling about?" I hear you ask, scornfully.  "We've all seen MATTEL'S Major MATT MASON before!" you declare.  Ah, but never one like this.  Take a closer look - see what I'm talking about?  Matt has a Union flag on his suit, not the Stars and Stripes of the United States.  Does that mean I've got a rare Mason figure, previously unknown until now?  Well, yes - and no.

Believe it or not, when I got this figure, it was in quite a bit of a state; paint peeling off with practically none remaining.  So I removed what was left and completely re-painted it.  See those red dots on the arms and legs?  I painted them on by hand, with a brush - and everything else on the figure except the head (and flag).  I doubt I'd be able to do it with such precision now, as my eyes simply aren't as good as they were back in the '90s.  The flag is a spare water-slide decal from a model kit, but I forget which one.  I could've painted it on, but I had the decal so decided to use it.

It makes a nice little collectable with a bit of a difference.  Like it?  You can study it in more detail in the photo below.  Incidentally, I made the name and number which adorn the helmet.  Betcha you'd never have known if I hadn't told you.

Boris Johnson wants one of those !

A lot of people would say he wants a good kicking, CJ.

I'm sure your Matt Mason figure looks great, but every time I look at the pic I get distracted by the Power Girl figurine on the left...

I can definitely believe that the figure was in "a bit of a state" when you got it. I remember how easily the paint peeled off. Also, the wire skeletons broke easily.

I think a couple of joints are snapped, TC, but I never bend it anyway - purely for display (along with the other two I have).

I got this one, with U.S. flag, for Christmas when I was four or five, along with Sgt. Storm and a lot of accessories. Only the Major and the Sgt remain, though not in as pristine condition as yours.

At least you've got your originals, G - mine are replacements. Having said that, I've now owned them far longer than the ones I had as a kid.

Saturn Girl looks like she's too busy keeping an eye on those Daleks too worry about what I say!

I'm beginning to suspect that she and Power Girl have something going on. They always end up closer together than I originally put them. H'mm.

Are his metal skeleton limbs intact? They broke and when the metal broke through the skin it was poke yourself in the eye time and Matt Mason went into the dustbin.

As I said a few answers back, PS, a couple of joints are broken, but the wire isn't sticking through the rubber. One of the other two I have is intact though, if I remember correctly. Matt Mason was a great toy in theory, but he had a short play-life. Unless, of course, one didn't mind playing with a non-bendable toy made of black rubber.