OLD PICTURES DON'T SIMPLY FADE AWAY - SOMETIMES THEY ACTUALLY DIE (OR ARE 'EUTHANIZED')...

Regular readers will know that relatively recently I've begun to reluctantly replace some of the pictures on my bedroom wall that have been in place for the last 30 years.  In fact, some of them are even older than that, having been on the wall when I first lived in this house, then on the wall of my new bedroom in a new house which my family moved to in 1983.  Then, 4 years later when I moved back here, the pictures went back up in their old place on the wall.

However, after all this time, quite a few are faded and stained with age, as you can see with the SUPERMAN cover above.  This was a spare copy I had after replacing it with a better-condition issue, so I cut off the cover and up it went on the wall. Believe it or not, the cover looked worse 'in the flesh' than it does in the photo, as the red portions were almost yellow after all this time.  I dug out the replacement copy and scanned and printed the cover, and that's the result in the piccie below.  A lot better, I'm sure you'll agree.  I feel bad about jettisoning the original after all its years of faithful service, but I want the room to look a bit fresher so can see no other alternative.  (I gave the old cover a 'Viking funeral'.)

I should probably have taken every picture down and thrown up some new wallpaper before starting this venture, but I simply don't have the time or energy nowadays. What would once have taken me 2 or 3 days at most would now take me several months, so I'll just have to settle for the pictures looking new(ish) and the wallpaper looking its age.  Hey, I can live with that. 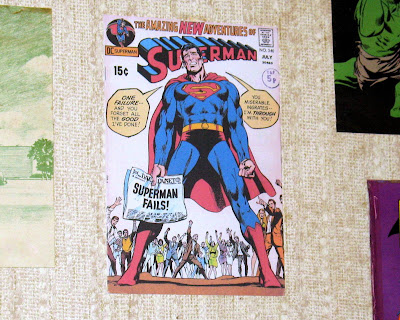 I'd go crazy looking at the same picture for 30 years. The only thing I put on the wall is a calendar which changes every month. Near the end of the year I get two free calendars, one from BBC Wildlife magazine and one from BBC Sky At Night magazine. At the start of each month I decide which picture I prefer and put that one on the wall for the coming month :)

They're like old friends to me, CJ - I never get tired of having them around. Continuity and stability, that's what I like. That's why I'm still wearing the same socks I first put on 50-odd years ago. True, I should probably have taken them off from time to time and washed them, but why wash my socks when I don't wash my feet? They're part of my skin now.

Kid if you had changed your socks more often that cover may not have foxed that bad!
Also how about framing it then it will probably last longer, and can be moved around the house to enjoy in any room or do you have OCD where you can not move it for what ever reason?

Is that the cover of FF 112 off to the side there?, with John B's titanic Thing v Hulk confrontation? Now that's a cover I never tire of looking at. Another would also be by big John - the Silver Surfer v Thor showdown from SS 4. I have been considering puttign iconic images up on the wall of my study, what wall space isn't obscured by bookshelves!, probably scanned images printed and framed. The place already looks like an annex to a pop culture store! Those two I just mentioned would be top contenders. Trouble is I'd also like images from classic movies or album covers - not enough walls!

I've never been diagnosed as having OCD, T, but I suspect I suffer from it as I don't like change in general, and especially hate change of anything I'm familiar with. Yes, I suppose I could frame some pics (and have), but framed pics take up more room. As for the foxing of that particular piccie, the wall is the interior of an exterior (if you know what I mean) and suffers a bit from damp sometimes. (But it was probably the socks.)

It is indeed, PC - as reprinted on a British FF mag (spare copy). I'd love to put up the posters to the first 14 Bond movies, but like you say, not enough walls. I intend one day to put a wall-to-wall, floor-to-ceiling bookshelf on one wall, behind mirrored sliding doors (to preserve the suggestion of roominess), so I'll have even less space for posters and the like. I'm dithering about it because it's such a huge change to the room (see answer above), but I'd be able to fill the shelves with books, toys and models. I think it would improve the room in a big way.

I have OCD Kid. (Diagnosed myself) If you can move something without feeling anxious or that something will happen you probably do not have it bad, if at all. I was only joking before! Mine is from anxiety for instance I could never talk in front of a big crowd I would go to pieces. One form mine can take is having to check something more than once eg have I turned the oven off or locked the door! I have major empathy with anyone that has anxiety related issues, even writing on here can be a challenge! Anyway banged on enough.

I don't like changing the layout of the furniture in my rooms, and have to do things in a certain way or I'm not a happy bunny. I also find it difficult to veer away from any kind of routine or schedule that I've established for myself over time, so that seems slightly OCD-ish to me. (Not that I want to have it.) Feel free to bang on any time.

Hey Kid, just to let you know the Warlord comic arrived today (well, it arrived yesterday, but I wasn't able to pick it up til today due to being held back a bit at work yesterday).

Read the first story and really enjoyed it, reminds me of the Victor annuals I used to get from a certain aunt every christmas (although sometimes I'd get the Topical Times Football Annual instead- I wasn't bothered, I liked both of them!)

I know you said the condition wasn't great, but it's certainly more than good enough to read and enjoy, and I have other stuff in much worse condition!

Thanks very much, looking forward to reading the rest of it later.

Great to hear, DS, and nice to know it'll find a place in your collection. It seemed a waste just to throw it out, so the fact that you're enjoying it makes that trip to the post office worthwhile - for you AND me. Thanks for letting me know it arrived safely.

Obviously I jest - I'm glad you found a good home for it, Kid. I assume you've got another copy (knowing you, you've probably got six other copies).

I don't like my schedule or routine being changed either but I can't have OCD because I don't mind objects being moved (I don't know what OCD is so I'm just going on Terence's definition) - when I was a kid I was constantly moving my bed around my bedroom. I'd get bored with the bed in a certain place so I'd move it to another place after a couple of months. But I don't do that now.

Nah, only 2 other copies, CJ. OCD is Obsessive-Compulsive Disorder. Yeah, I'd move my bed around sometimes when I was younger, but it's now been in the same place for 30 years. It's a different bed though, 'cos my old one was falling apart. (And when I say 'old', it was only around 10 years old.)

Scratch that, it seemed as if it was only around 10 years old. Actually, it must've been closer to 25. Time goes by so fast.