SEE IF YOU CAN 'WADE' THROUGH THIS POST ABOUT A BEAR IN A BOX... 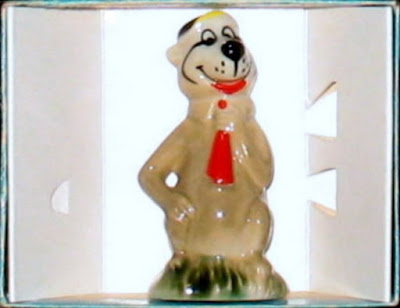 Yes, yes, I know I've shown you this WADE porcelain YOGI BEAR before - more than once in fact - but this time there's a difference.  I've got three of these Yogi figures, including the original one I bought back around 1970, plus two I got via ebay, one with the box.  Here's the thing though - I didn't realise when I bought the boxed one ('cos it wasn't mentioned in the ad) that it didn't have its inner tray.  Boxed ones are so hard to find that I decided to keep it anyway, and I made an inner tray myself as best as I could remember it.

However, a few nights ago, I noticed another one on ebay, so immediately contacted the seller to see if he would supply me with a scan or photo of the tray, which he kindly did.  Using the supplied photo as a template, I created a duplicate tray, which is as much like an original as it's possible to be.  In fact,  if I hadn't just told you, you'd probably never have realised it wasn't the original, even though  it's probably better, as the original trays weren't always cut and folded as well as they could've been.  (I've not folded mine too perfectly, in order to keep the spirit of the original.)

So, finally, wee Yogi's home is as it should be and all's right with the world.  I love a happy ending, don't you?  (And don't worry about the other two Yogis - they get a turn in the box as well every now and again.)

(Having just looked again at earlier photos culled from ebay, wherein the tray is only partially visible, I see that it differs from the recent photo I was given.  It would therefore appear that variant trays were used during the production of this item, which was made between 1962 and '63.) 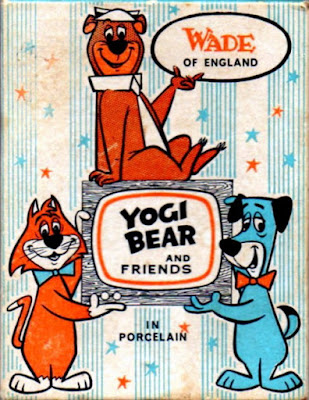 Kid, I'd be interested to see the inner tray you made !

You're looking at it in that first photo, CJ. Took it yesterday. (Or do you mean the very first one I made? Type Wade Yogi Bear into my blog's search box and it should pop up in an earlier post among a few others.)

You need a hobby mate!

You've got a choice of two answers, Baab.