Well, we've finally reached the last article in the 1966 one-off issue On The SCENE Presents SUPER HEROES, but that's not the end of it.  The mag contains some great ads, which scream "1960s", and it would be remiss of me not to feature them in a future post.  A post comprising entirely of ads?  Sure, why not?  So the final part in this occasional series is yet to come, but it'll be worth it when it gets here! 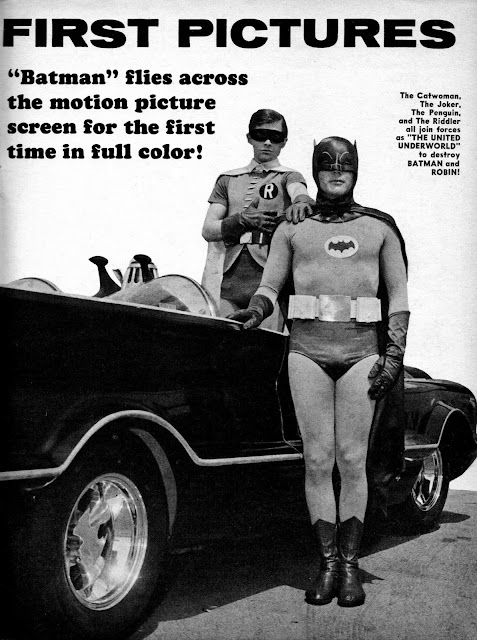 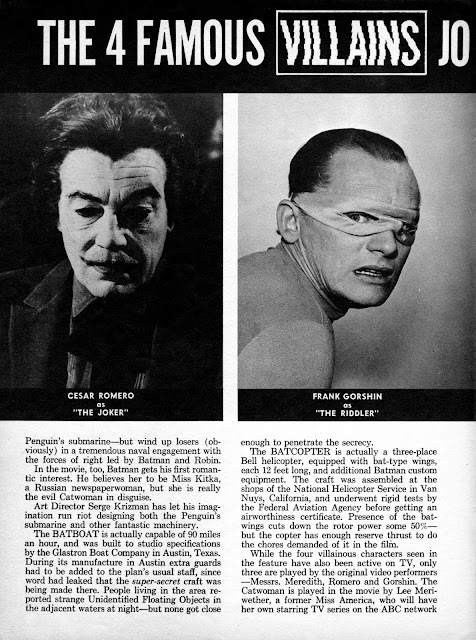 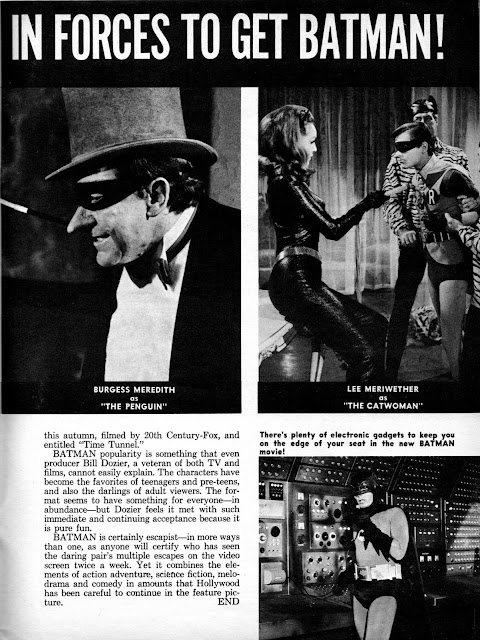 IIRC, this article was the only one written specifically for the "On the Scene" one-shot. The others (about the old movie serials) were reprints from Screen Thrills Illustrated and Spacemen.

I can't really be sure if the photo of Catwoman on the last page is from the movie or the TV series. It looks like it could be Julie Newmar instead of Lee Meriwether.

Lee replaced Julie for the movie because Julie was busy elsewhere. Judging by the dates involved, it may have been while Julie was guest starring in episodes of F Troop, The Beverly Hillbillies, The Monkees, or even Star Trek.

I think scenes with the bat-boat and bat-helicopter were first filmed for the 1966 movie, and were used as stock footage in later episodes of the TV series.

I believe that's correct, TC - I've read the same thing myself elsewhere. I'd also say that the photo is definitely of Julie Newmar. They must've thought it wouldn't much matter, given the poor reproduction quality. Again, yes, the movie's Bat-Boat and Bat-Copter shots in the 3rd series were stock footage from the movie. When I see Julie as Catwoman, I think she's the best, but then I see Lee in the role and think the same thing. I guess I'm fickle that way.

I remember going to the movie and being almost speechless with excitement. I was literally transfixed as the movie played before me. I remember it fuelled my imagination for months after as Batmania really hit home! When the Tim Burton Batman played there was an on screen advertisement for a video of the 66 movie. I was actually annoyed when the kids of the 1980s laughed as Batman sprayed the shark with Bat Shark Repellent. The 60s movie had made such a deep impression on me that I was totally in awe of the Caped Crusader and totally believed in him.

Yup, definitely Julie Newmar and from the series (I’m fairly confident that her cat themed henchmen didn’t appear in the movie). Love this movie (loved the show) and love this way of marketing movies have you seen ‘Return to the Batcave’?

I didn't see the movie until around the mid-'70s, when it was shown on TV one Saturday morning, I think. Thought it was hilarious - in a good way. If I'd seen it as a kid, like you, Ken, I'd probably have thought it was meant entirely seriously.

Yup, got it on DVD, AJ. (Remember and send me your email address, so that I can send you those scans.)