I have a relative, a cousin (or at least that's how we referred to him), somewhere over in South Africa who I don't think I've seen since 1972.  Apart from once, perhaps, but, if so, it's so long ago, I'm unsure whether I'm half-remembering or completely imagining it.  ROGER is his name, and he and his wife MARY sent a Christmas card every year for decades, though I'm unsure whether there's been one in the last couple of Christmases.  I therefore don't know if he's still alive or not, as he was a good few years older than me.

As we were both good at art, on the few occasions he visited (before emigrating), we'd do a drawing together - him on one half of the paper, me on the other.  Then we'd separate it, and he'd keep my half in his wallet, and I'd keep his half - well, somewhere safe meant to be, but I somehow managed to lose it by the time we next met.  This happened twice, I think, and then, on September 17th 1972, we did our third attempt, half of which you can see at the foot of this post.  What surprises me now, seeing the date, is that I'd lived in this house for only three months, so the previous doodles were likely produced while I was still living in my former abode, though perhaps drawn at my grandparents' flat when Roger's and our visits coincided.

The drawing we decided to collaborate on was a large panel on the front cover of The BEANO #1492, dated February 20th 1971.  I was surprised to learn this, because I'd never have thought I'd still have a Beano bought over a year before, but perhaps it was because it was the first issue to have the new decimal price on the cover.  If so, I probably also had the previous one as it was the last to have the old £-s-d price - 4d.)  My cousin signed his half of our drawing PICASSO and I signed my half REMBRANDT (modest as ever), and that could well have been the last time I ever saw him. 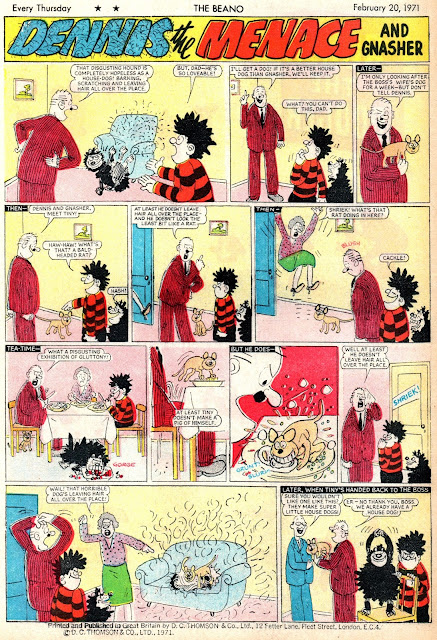 Except, niggling away at the back of my memory, is a feeling that he may have visited one more time.  I seem to remember that either I couldn't find his half of the drawing on that occasion, or - for once - he didn't have my half with him, so we never got to put them together again, as was meant to be our custom.  Perhaps I'm confusing it with another drawing from an earlier occasion, but I've a notion it's probably as I think I remember, because I seem to recall my sense of elation when, weeks or months later, I actually discovered where I'd stashed his half of our masterpiece.  Of course, it's  always possible that I only dreamt the episode.

Which brings us to the present: I was cleaning an old photo frame recently and took the photo out to clean the glass properly.  Tucked in the back was Roger's half of the drawing.  This made me want to see the other half, so I asked someone to dig through his back issues and find the comic whose cover panel had been copied back in 1972. I was surprised to see what would've been my half, because I'd always imagined (not having seen the part I'd drawn since first producing it - except for maybe once, remember) that my subject would've been BIFFO's pal BUSTER (not the IPC one), and not a PLUG ventriloquist's dummy.

Anyway, I managed to track down and buy the issue on ebay, so here's the front and back covers to help you celebrate my joyous reunion with a comic from my youth, which, to be honest, if it hadn't been for Roger's drawing, I'd probably never have remembered in a month of Sundays.  Now all I have to do is find out if my former collaborator is still alive, and see if my part of the drawing is still tucked away in his wallet.  If not, at least now I can re-create it and send him a copy for old times' sake. 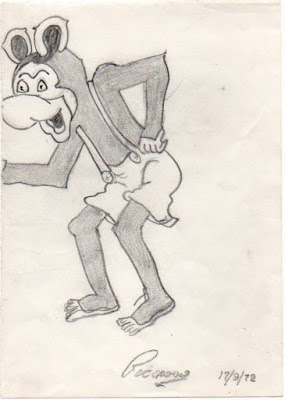 My father had two brothers, one of whom emigrated to Australia circa 1960 and he had two children so I've got two Australian cousins that I've never met nor had any contact with in any way - we aren't a close family. Good luck in finding your cousin, Kid :)

I don't think I'll be making it a priority, CJ. It's just another of those things that I plan on getting around to - eventually. It's nice to have tracked down the comic again 'though.