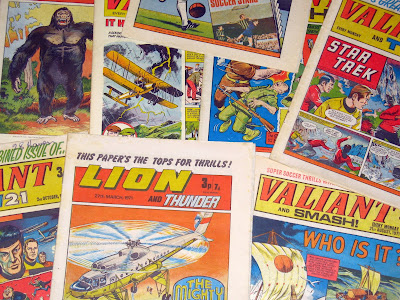 What is?  The British comics industry, that's what!
Remember all the comics that newsagents counters used to
strain under, week by week, the product of IPC and DCT?  I'm
talking about real comics, not puzzle or activity mags with a smat-
tering of comic strip content - actual comics that were filled to the
gills with strip after strip, for only a few pence, published by mighty
empires devoted to producing weekly periodicals for kids all over
the country (and abroad).  Companies who were in competition
with each other, vying for whatever pocket money wasn't
spent on sweets and toys.

That doesn't exist any more.  It has expired, turned
up its tootsies, fallen off the twig, shuffled off this mortal coil,
is pushing up the daisies - dead!  What remains today is nothing
more than the equivalent of a craft fayre or car boot sale, where
anaemic and emaciated survivors cling on by their fingertips, try-
ing to be all things to all kids, but sadly ignored by the majority
of them.  Circulation figures today are generally so poor that,
in the industry's heyday, a comic would have suffered
cancellation long before it ever sank so low.

Don't be misled by those who say otherwise;  those
whose self-interests lie in talking up the current situation.
We're talking about comics - weekly, published paper comics,
devoted mainly to humour and adventure strips for the entertain-
ment of kids and teenagers, at a reasonable price.  We're not talk-
ing about on-line cartoons, or collected editions in book form.
Comic strips can be published in a variety of mediums, but a
book is a book and a website is a website, which - although
they might feature comic strips - are not in themselves
'comics' in the traditional sense.

So, to reiterate - the industry of traditional, weekly,
published paper periodicals called comics is, sadly, dead.
THE BEANO and 2000 A.D. do not constitute an 'industry'.
No amount of wishful-thinking, or reinterpretation of the facts
can change that.  However, whether it's an immutable condition
is by no means certain.  Perhaps, some day, that once-mighty
industry can be resurrected, and, if so, those of us who love
comics - real comics - printed paper comics - will
welcome their return.  What else can I say?

My local Smiths no longer stocks 2000AD, I haven't bought if for ages so I don't miss it. The buyer in that store was always a bit of git, during the height of the Prog's popularity there would only be two or three issues in there, so you'd have to get in early, what an idiot!

People here will tell you print is dead, that may be so here but it's certainly not a situation represented globally. We've got problems with distribution and publication, both have been heavily rationalised and have brought along a concomitant drop in editorial standards throughout the periodical market, not just comics. The chief culprit there is some privately owned company in Germany or Sweden, somewhere like that, can't recall the name at the mo.

We also have problems with print distribution and print stock costs. Press distributors generally impose restrictive demands on outlets, which means they can't put out periodicals or paperbacks from other sources, the reason why spinner racks have gone. The situtation is almost impossible for independent publishers, if there were an independent business presence in the high street that could possibly serve as an outlet but they've been driven off by excessive revenue demands, ever wondered why there are so many coffee shops? It's because the mark up on coffee is 500%. Japan has a Manga trade worth about 400 million annually about half of which is independent, there's no such market diversity here, and there's never likely to be ever again.

My local WHS still stocks 2000 A.D. and The Megazine, DSE, but they're placed on a shelf where'd you'd have to know where they are in advance to be able to find them.

In the case of comics in this country, it was the rivalry between (mainly) IPC and DCT which allowed (even encouraged) comics to prosper for a time, because they were always trying to trump one another. Each of them usually had a comic 'ready to go' in the event that the other issued a new one. Of course, comics used to be the least expensive form of entertainment for kids, which is why they once sold in such great numbers, but as prices have risen (and competing interests reared their heads), sales gradually dropped off so drastically that IPC sold its Youth Group (who produced their comics) to Robert Maxwell, whereupon title after title was cancelled until there was nothing left.

I'm afraid that, without two giant companies bouncing off of one another, the likelihood of conditions conducive to the re-emergence of an actual comics 'industry' are very slim indeed.

Yeah it is sad Kid but it's just the way things are going, we're heading into a cultural dead end. I've lost count of the writers and artist begging for an outlet for their work having to settle for the job in the bank or cleaning windows. Digital media was, and still is a viable avenue but the writing's on the wall there too, with the big players, Amazon, Google showing their hand over promotion of material. The Web might seem like a fantastic distribution medium, but without the promotional impact, you're spitting in the wind and Google have spend a lot of effort eradicating the impact of viral awareness, especially over the last 18 months or so.

Remember when The Dandy died and we were told that it was going to have another, even better, 75 years on the internet? And look what happened - it died on its @rse after about 6 months. Internet comics may be okay for readers, but not collectors - 'though I suspect that comics would be better served being promoted by the internet, rather than the internet replacing them. All we can do, I suppose, is wait and see what happens, but an actual comic has a magic that a web comic can never replicate.

DCT have made some incredibly bad decisions, I think they've frittered away the legacy of good will associated with their characters. They still have a unique market position but the window for them is closing fast, pretty soon Roger and Dennis won't mean anything to anyone under retirement age. The Dandy website could've worked but it need investment, proper interactive content, games, animation etcetera. DCT have a rep for parsimony, so that was never going to happen, it was just a cheap alternative to print for 'em, yeah good luck with that one. I'm not sure what their finances are like, it wouldn't surprise me if they sold out to a bigger interest within the next few years.

It's hardly surprising to me that The Dandy website failed, DSE. The comic had fewer than 8,000 readers (and dwindling) so the website had a very limited market to begin with.

Something I forgot to mention was that Fleetway/IPC & DCT used to print comics mainly to keep the presses rolling between running off newspapers and magazines, because it was cheaper to keep them going than to stop and start them all the time. That meant that any money made from comics was a bonus, it wasn't the be all and end all. When printing methods changed, comics then had to stand on their own two feet, which they've singularly failed to do.

I fear that you may be right about the eventual fate of DCT.

It strikes me as particularly sad since comics are enormously popular in my classroom- Manga, the Titan DC and Marvel monthly reprints as well as Simpsons and (especially) Adventure Time. Graphic novels have also proved popular in our library, particularly the Marvel Essentials and DC Showcase collections but also the current Ms. Marvel, Jeff Smith's Shazam! etc.

Our pupils range in age from 11 to 17 and there's no real gender preference. So, the market is still there. It's the distribution, the placement and the cost of the product that are problematic, for my money.

Yes, there are plenty reprints around, and kids still seem to want to read comics, but in nowhere near the numbers they used to. Comics on an individual level sell far less than in their heyday, and, in Britain, there aren't any giant publishing companies devoted to producing several weekly titles which are mostly comic strip orientated. I suppose the kids in your class read comics that you (or the school) provide, Dougie, but how many of them would buy them for themselves?

So there is a market, albeit a small one, but there's no real industry to provide for it. As you say, sad.

DCT would never have needed to do this in the old days, Phil, as everyone knew about their comics and bought them. It kind of shows how bad the situation is for them to resort to this. 'Sponsoring' is only another form of paid advertising, which Thomson's as an entity can certainly afford, but only time will tell if it's effective.