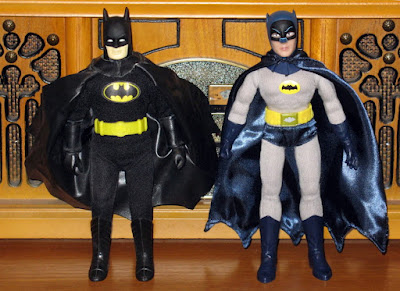 It's amazing how you can forget what you own, isn't it?  (Frightening too, sometimes.)  The Batman on the left of the picture is one I'd completely 'disremembered' until digging it out of a box recently.  It's in the Mego style (size-wise), but I can't recall who the manufacturer is (Kid Biz/Toy Biz, according to eBay).  I've probably had it for at least 20 years (maybe even 30), and should never have forgotten it as it was on display in my bedroom for a good stretch of that time.
The Adam West figure is by Figures Toy Company, who've reissued a lot of the DC Comics heroes first produced by Mego back in the '70s, though this wasn't one of them.  Nice to see Adam being recognised as Batman, because even back in the '60s, most items of merchandise (with a few exceptions) were of the comicbook Batman, even though it was the TV show that inspired them.  In fact, there seems to have been more Adam West (specifically) Batman collectables over the last few years than there ever was at the time of the show.
My reissue of the '70s Mego Batman arrived at the same time as AW, but the toe of one boot has a big blob of moulded plastic in it and won't fit over the foot, so I can't display it to good effect.  I've contacted the manufacturers about it, but they haven't responded as yet.  I'll give it a day or so, then 'let loose the dogs of war' if they don't send a replacement boot.  They seem difficult to deal with when it comes to rectifying a problem, but I'll give them a chance to put things right.
I'll keep you posted, 'cos I know none of you will be able to sleep until you find out what happens. (Cough!)  Any comments?  Go on, you can at least pretend to be interested.
Posted by Kid at Tuesday, June 28, 2022

I can't forget what I own because I don't own much anymore but I sometimes have a fantasy where every single thing I've ever owned appears before me in a gigantic mountain of stuff. It would be fascinating going through it all as I've probably forgotten 95% of what I've owned in my lifetime.

It's not like me to forget my own possessions, CJ, so I'm beginning to wonder if there's an underlying medical reason for my growing forgetfulness. I have quite a few disorders at the moment, so I'm hoping it's only the advance of old age. That fantasy of yours sounds like just the sort of thing that I'd love.

The figure has a flesh-coloured articulated plastic body, dressed in some kind of fabric costume, PS. Ring any bells?