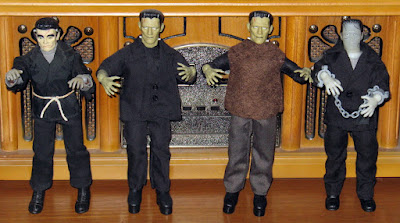 Pop sensation The Four Frankies are on tour at the moment and, last night, they played The Olympia Ballroom in my hometown.  From the moment they took to the stage, there wasn't a person in the venue who wasn't comatose with delight as the fab four grunted their back catalogue of hits.  True, when their songs are played on the radio, it's usually during the 'graveyard shift', but the group is immensely popular with 'coffin dodgers' throughout the country who are too afraid to go to sleep in case they don't wake up again.
The hits stuttered slowly-but-surely, with a fair share of (tweaked) cover versions; Dangers In The Night, Monster Mash, Thriller, Mack The Knife, I've Got Glue Under My Skin, Is It Really Over?, and many more.  True, the choreography appeared just a little stilted and uncoordinated, but if you had as much lead in your boots as these guys, you'd be lucky to be able to move at all.  Should they come to a concert hall near you, be sure to drag yourself out of your bed and go and see them perform - they're dead good.
******
Okay, so they're only Mego figures, but the first one is an original Frankenstein from the '70s, to which I've added a 'rope', as he's got a gold braid around the waist of the grey tunic (under his jacket), which doesn't quite look right.  The other three are more recent, having been issued in the last few years, but they're a nice little collection.  If you've got a favourite out of the four, declare your preference in our currently 'quiet as the tomb' comments section.
And if you can think of any song titles that lend themselves to the horror/monster theme, feel free to say what they are.  Minor tweaks allowed to make them more apt.
Posted by Kid at Saturday, June 25, 2022

Looking for a good undead combo then check out these guys.

Here's a list of songs suitable for the Four Frankies:

I Have A Scream
Stake A Chance On Me
This Ol' Haunted House
Stand By Your Wolfman
We Don't Stalk Anymore
Satan On The Dock Of The Bay
Midnight Ghost Train To Georgia
Hit The Road Drac
Fear Prudence
Wherever I Lay My Bat That's My Home
Under The Moon Of Lovecraft
I Won't Survive
Auld Fang Syne
I'll Get By With A Little Help From My Fiends
Stayin' Alive (Forever)
I Fought The Claw And The Claw Won
Sing If You're Vlad To Be Gay
Me And You And A Dog Named...BOO!!
Vincent (Price)
Raindrops Keep Fallin' On My Headstone
Yes Sir I Can Bogeyman

What can I say, CJ? I wish I'd thought of them, but my brain was far too weary. Brilliant stuff. More! Author!

Chariots Of Hellfire
Black Is Black Mass
Are You Loathsome Tonight?
I Am 516 Going On 517
Drac The Knife
Rosemary's Baby Love
Heaven Must Be Missing A Fallen Angel
You're The Horned One That I Want
Sulphur Lady
If You're Harpy And You Know It Clap Your Hands
Get Outta My Dreams Get Into My Karloff
Oh This Year I'm Off To Eat Some Brains (to the tune of Y Viva Espana)

Some genuine chart hits for the Four Frankies could include:

I was aiming for something like Drac The Knife, CJ, but could only think of Jack The Knife, which is why I stuck with the original Mack. My brain was so befogged I could hardly think of a song title, never mind a tweaked one. (Dangers In The Night was the only half-decent one I could come up with so I was doomed from the start.) I'll have what you're on.

Lol pretty good Colin. I can only think of one real song not on your list "Scary monsters (and super creeps) " by Bowie.

Jim Reeves sings a song called Partners; it's about two prospectors, one who kills the other when they run out of food. Hey, that's pretty monstrous.

OK, here's my final batch of songs for the Four Frankies:

Please Mr. Ghostman
Fright Fever
Skull Of Kintyre
Bob The Builder (Can We Crucifix It?)
Remember The Days Of The Old Graveyard
Whatever Kill Be Kill Be (originally by Boris Day)
Raindrops Keep Fallin' And I'm Dead
Like A Virgin (Sacrificed To Satan)
50 Ways To Leave Your Coven

And another genuine chart hit is 'Monster' by The Automatic...

Great stuff, CJ. Look for all those tracks on the Four Frankies' upcoming CD release - on sale soon (after doomsday).

Kid, I've managed to dig up (ho, ho) one last batch of songs for the Frankies:

The Bride Is High
Walk Like An Egyptian Mummy
By The Shivers Of Babylon
How Creepy Is Your Love
Love Me Tendril (think killer plants)
The Long And Winding Road To Hell
Let It Beelzebub
Eight Days A Shriek
Nuclear War! Huh! What Is It Good For? Making Brain-Eating Zombie Mutants!

So the Four Frankies should have enough material for a long and successful career.

And it's mostly down to you, CJ. (And me too for inventing them as a group.)