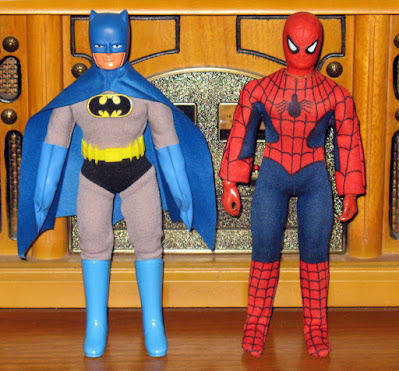 I know all you Crivvies just love my posts about Mego 8 inch action figures (whaddya mean "He's delusional"?) so here's another one.  I showed you the Spidey figure a little while back, given to me by a friend, though the left shoulder joint was broken.  I managed to fix it, but it was a 'fist-fighting' figure with a little lever on the back that, with the elbows bent, moved the arms and made them look like they were punching, so the repair, alas, turned out to be a temporary one as the robust action put too much strain on the shoulder joint and it broke again.  The plastic is a little waxy, so even superglue wasn't up to the task of ensuring an effective, long-lasting repair, so -  what to do?

Well, I went onto eBay and saw an old Batman fist-fighting figure, bereft of everything but his leotard.  It was going for a song so I nabbed it for the purpose of transferring Spidey's head and hands onto the body.  My local B&M store was selling Mego Star Trek figures for a mere £3 each, so I bought a few and put the Batman head onto one so that the head wouldn't go to waste.  Why not just put the Spidey head and hands onto a new Mego figure though?  Simply because Spidey's costume had a bare circle around where the lever was situated, though the Batman one didn't.  Had I given Spidey a new Mego figure, he'd have had a bare space where the lever had once been.  As Batman's didn't, his leotard would fully cover his back area, so it was no contest.

As to why Spider-Man had a hole in his costume to accommodate the lever and Batman (and maybe even other Mego heroes) didn't is beyond my ken, but it decided my course of action.  So Spidey once again had his fist-fighting figure and Batman had an 'ordinary' one, though was missing parts of his costume.  Searching the Internet, I found replica boots, gloves, utility belt, cape and bat insignia, and promptly ordered them.  They arrived last week, but I was disappointed to see that the blue of the gloves and boots was too light in hue, so I've ordered more accurate blue versions from another source.  The emblem you see here is a temporary one I made myself as the black area on the one I bought started flaking with the slightest handling, but a better one is on its way.

So Batman has a new body and costume accoutrements, and Spidey has an original '70s fist-fighting body exactly the same as the broken one I discarded.  Bat into Spider indeed!  Feel free to tell me what a talented individual I am, and confirm my own personal assessment of my undoubted genius.  (What's with the "He's delusional" bit again?)

Strange that they'd make an obviously wrong shade of blue on the boots and gloves!

I know - and then advertise them as being suitable for '70s Mego figures. As far as I know, the only Mego figure in the '70s with blue boots and gloves was Batman, though there might've been later versions that were a little lighter in colour.

CJ, you forgot to mention my genius and talent, so feel free to leave another comment which does just that.

There are no words to adequately describe your awesomeness, Kid.

By the way, BBC Radio 4-Extra is currently broadcasting the radio version of 'Whatever Happened To The Likely Lads' from 1975. In last week's episode Bob dithers over whether or not to keep all his childhood memorabilia. "I don't want my house to become a museum to the 1950s" says Thelma at one point.

Thank you, CJ, for that completely unsolicited testimonial. As for Thelma, she insists that Bob throws out all his stuff, but wants to hang onto her own. I've got the TV episode, but the radio versions were also good in their own way. My house is a museum to the 1960s - right up to today.

How's your plans for setting up some sort of museum/display for your old stuff going Kid. I saw Batman and Robin Cherilea figures at a local antique shop and thought I'll get one of these as I had them as a kid ( I'm not really toy guy) all the more surprising for me to look to buy at £10 - a lot for me to pay for old toys, especially as they were both in poor condition. Ayway I asked the guy if I could see them and he offered me a deal on both figures for........£170 . They were £100 each not £10! I might have told you that story before but I just can get my head around what folk are asking for these old toys

I haven't pursued it yet, McS, as I enjoy having my vast collection of stuff close at hand. However, before very much longer, I'll have to explore the possibility of perhaps getting a Lottery grant to set up a museum of childhood - no children allowed of course, the grubby little vandals. I've got the Cherilea Batman & Robin figures, which were in quite decent condition when I bought them, but I retouched the paint in places so that they look practically perfect to the naked eye. (Hee-hee, I said 'naked'.) Mine didn't cost too much either.

I heard a few WHTTLLs on the radio sometime back in the '70s, and I've got a BBC cassette tape collection of four '60s LL episodes that I bought decades ago, CJ. They don't always have the same actors playing the same parts (apart from the lead characters) 'cos they're not always available. Though in the case of my tapes, I think the Beeb just used the audio soundtracks from the TV.

And the smart meters?

Does not compute, Will Robinson. (Eh?)

I've just noticed your question about whether I have Smart Meters or not, CJ - I must've forgotten to read on after the first part of that particular comment. Nope, no Smart Meters - can't be @rsed with them.

I wasn't very keen on smart meters either, Kid, but my electricity supplier kept badgering me to have one installed so I relented just to shut them up. That was in 2019 and I must admit that the smart meter has been very good because you don't need to bother with meter readings anymore, they are sent automatically from the meter to the supplier. Also you get an "energy tracker" which is a small monitor showing how much electricity you are using. So when British Gas wanted to install a smart gas meter, I agreed. Apparently my existing energy monitor will double up to show gas usage as well as my current electricity usage but it hasn't happened so far - it'll take 10-14 days they say so we'll see. These smart meters are the future so you'll have to get them installed at some point!

I'll wait until such time as I NEED one to be installed, CJ, because I don't like strangers coming into my house to do work or make changes unless it's absolutely necessary. I used to get emails from Scottish Power all the time offering to fit a Smart Meter, but I told them to clear off and stop bothering me, and that if or when I wanted one, I'd contact them.

Apologies if I offended you, Kid - indeed it's YOUR choice whether to have a smart meter or not and, like you, I'm not keen on strangers stomping around my house.

You didn't offend me in the slightest, CJ, so no need at all to apologise. I merely emphasised (I wasn't shouting or angry) the word 'need' to indicate that, left to myself, I would never get a Smart Meter, and it would take compelling circumstances (like it becoming unlawful not to have one) for me to ever get one installed.