THE YOGI HAS LANDED... 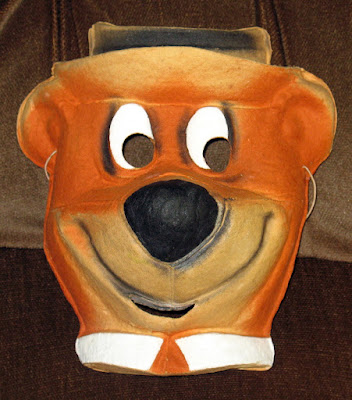 One thing I recall a number of friends saying to me over the years about various toys in my collection which they'd likewise owned as kids is - "It's smaller than I remember it".  It's understandable I suppose, as they're probably comparing it to how it looked in their child-hands against their adult-hands, but this is something that's never really happened in my case.  An Action Man (for example) looks the same size to me today as it did back when I was a child (though I never actually owned one until the fad had passed, when I got a couple second-hand from a neighbour).  Perhaps because I often used to place my toys on the floor (or on a table) and just look at them, and not see the scale of them in relation to myself is what accounts for the size of newly-acquired old toys not seeming smaller to me than they were when I first owned them.

However, there's always an exception, isn't there, and my freshly arrived cardboard Yogi Bear mask is an instance of such a thing.  I do seem to remember it being larger and the collar being thicker (from top to bottom), but that may be because my memory has been influenced by other (plastic) Yogi Bear masks from subsequent decades that I bought as stand-ins until I could find an example of the original shaped-cardboard one I got from Woolworth's back in the '60s.  I've been having a think, by the way, as to exactly what years I bought the two masks I had (separately), and I've now got a clearer idea in my mind.

I'm pretty sure I was living in our first house in the new town, so if I got it for Hallowe'en, it must've been 1963 at the latest, as the next All Hallow's Eve was spent in a new house just down the road, which we moved to around halfway through 1964.  We were only there for about 15 or 16 months though, before flitting to yet another home in a different neighbourhood of the town in 1965.  It was there I obtained my second Yogi mask (same as the first), again from Woolworth's, and as my first Hallowe'en in that house was in 1966, that's most likely the year I got it.  But what do you care about such trivial, self-indulgent details?  "Nothing!" you say?  Fair enough.

Anyway, Yogi required a bit of repair and restoration, so I've included three photos I took, which you can compare against the seller's.  I had to replace a missing piece from the base under the collar and I think I did a pretty good job.  If you'd like to swell my already inflated opinion of myself and my abilities, then don't let me stop you.  If you weren't going to, I have only this to say... what's wrong with you?  A little insincere flattery on your part isn't going to hurt anyone - especially not me.  Right, that's you told; start composing those paeans of praise immediately.  And if you have any thoughts about the seeming disparity in the size of old toys when you see them today compared to how you remember them, feel free to share. 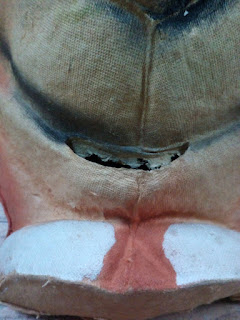 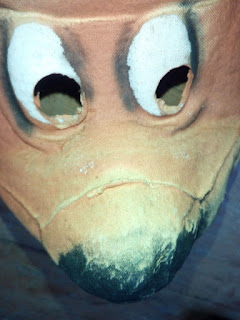 Smarter than the average rebear! Very nice work there Boo Boo! Another piece of history in the picnic basket!

Duh! What's a 'rebear'? And never mind history in the picnic basket - I prefer a picnic (and not just a chocolate bar of that name). Ta for recognising my genius (cheque's in the post).

Ouch! That's awful. I should've known (stupid people would say 'should of') I could rely on you for an awful pun.

Congratulations on the aquisition and repair. It's always good to fill in the missing pieces of one's past.

Thanks, T47 - I feel like I'm a kid again. Was whisked right back to the past the second I saw it again upon arrival.