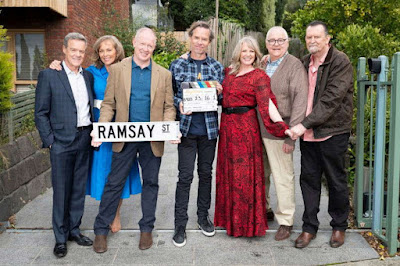 Well, as we all know, Neighbours shuffled off this mortal coil on Friday 29th, and it struck me that the soap had been broadcast in Britain for around half my life plus 5 years before disappearing from our screens.  I'm not really a watcher of soaps, but when it started, I was still a freelancer working from home and had the TV on as I worked.  BBC 1 was the default channel that flickered into life when I turned on my telly in the mornings, so along with Going For Gold with Matthew Kelly and a show (the name of which I forget) hosted by Tom O'Connor, I also half-watched Neighbours (as in lifted my head to look at the TV screen every so often).  Back then, television remote controls weren't so common and I was far too lazy to get up off my chair at my desk to change channels, so it was no surprise that I gradually got sucked into the 'social cliff-hangers' which usually ended each episode.

I must've watched it for a few years until most of the original cast departed, at which time I lost interest and departed with them, but I occasionally dipped into it every so often, until I abandoned it entirely as I found many new cast members about as charismatic as a group of stamp collectors or train spotters (or comics collectors).  It's ironic that characters Scott and Charlene gave the ratings a boost, because they were probably mainly responsible for killing my interest in it.  You see, until their romance and wedding became the main focus of the show, it seems to me that plotlines were built mostly around older members of the cast, but Scott and Charlene, due to the interest from teenagers, prompted producers to shift the emphasis to newer, younger members, with older ones slightly side-lined to that of supporting characters.

Anyway, I watched the extended last episode (as well as the afternoon one earlier in the day), and it was good to see the return of actor Paul Keane as Des Clarke, as he was always an amiable, likeable character and his performance when his wife Daphne died back in the late '80s was a good piece of acting, not something TV soaps are usually known for (with exceptions of course).  Funny how soaps can affect people, as, despite myself, I somehow feel I've lost some friends and acquaintances, and the ability to visit a Melbourne cul-de-sac, which was as familiar to me via the TV screen as the view outside my house is via my window.  (And that's what a TV is - a window to another world.)  Like so many other things I thought would be around forever, I felt I'd be able to drop into the Ramsay Street whenever the fancy took me, but I was misguided in that belief.

Having said that, though, I didn't realise there was quite so much (any in fact) same-sex kissing (and touching and fondling) nowadays, so had I known, and had Neighbours continued, it's unlikely I'd have felt inclined to renew my acquaintance with the show as it had transformed into quite a different kind of programme to what I knew.  Therefore, maybe it's a good thing it's finally ended, lest my memories of it in its heyday became sullied by its pc embrace of a lifestyle for which I have no empathy.  Better to remember the glory days of its early years, before it descended into 'woke'-ism.  So here's to Neighbours  - everybody needs good ones, and I hope all you Crivvies are lucky in that respect.

Did you watch Neighbours?  Will you miss the show, and are you saddened by its demise?  Feel free to comment in the relevant section.  It might take me a while to respond, but you can chat amongst yourselves 'til I join the party.  (I'll endeavour to publish your comments - if any - as soon as I can.)

I don't think I ever watched Neighbours but I do remember the Kylie Minogue and Jason Donovan pop hits from the late '80s and early '90s. And I did watch ITV's rival Aussie soap Home And Away for a while.

Hi Kid,
Great to see you back blogging and hope you are OK, however I can't pass any comment on Neighbours as I've never watched a single episode.
Cheers,
Big D

I’ll tell you a neighbour story. My window on the left of my bed, I cut out a Kirby Fantastic Four poster from the back of a Captain Britain. My neighbour was an old lady.
One day she passed away and I could see cobwebs forming on her windows.

Totally unrelated . Our old gardener fought in ww1. You tend to think of the war as history yet here I am- I knew a guy who was in ww 1.

I eventually watched Home And Away myself for a time, CJ, but again, I abandoned ship when most of the original cast departed.

Yup, I'm okay(ish), D, thanks - just tired. At least you won't miss the show, never having watched it.

You mean because she wasn't around to clean them away, PS? I don't know anyone who fought in WW1. I DO know a few people who might be fighting in WW3 though.

Yes I watched it too for a while back in the late 80s. The show was good with the Jim Robinson's. Madge, Mrs Mangel etc but as you said when the shows direction went the way of the teenager I changed channels too. I didn't bother with the last episode too much waters passed under the bridge

Kid - on 9/11 the BBC waited until after Neighbours had finished at lunchtime to tell us that the first tower had been struck. That certainly says something about the show!

I liked it when it was mainly about the Robinsons, the Ramsays, and the Clarkes, LH. And I preferred Darrius Perkins as the first Scott Robinson, though I eventually came to accept Jason Donovan in the role.

It also says something about the BBC, CN. In the UK, I'm wondering if we should refer to that terrible event as 11/9, as the US puts the month before the day.

To be fair, Kid, when the first plane hit the tower on 9/11 it was thought to be an accident and not a very big story so I'm not surprised the BBC waited until after Neighbours to mention it.

I'd say it was a huge story, CJ, even had it 'only' been an accident, and definitely warranted interrupting a mere soap. (Even had it only been a 'banner' headline at the foot of the screen.)

I wasn't aware that the BBC didn't televise 9/11 until after an episode of Neighbours finished ( never watched it but was aware of the programme - looked awful) regardless of 9/11 being an accident or as it was a terrorist event that should have been on the BBC as soon as it happened. I'm pretty sure if the Queen sneezed they would have interrupted Neighbours for that. I was moving my mortgage when this happened so had no idea until after I left the solicitors and I passed Curry's electrical shop and saw it on a TV , everyone was just stunnned.

Neighbours could be awful sometimes, McS (not quite as bad as watching football though), but the early episodes were better than later ones when there was an infusion of younger characters. One thing I noticed with the last episodes was that the producers have songs warbling through some scenes, which is right over the top, as if viewers need to be led by the music to recognise what are intended to be emotional scenes. As far as I know ('cos I don't watch them), British soaps don't go in for this annoying habit. (Or do they?)