At the risk of you all groaning in despair "Oh, no - not again!", I simply can't help myself from marvelling at just how quickly time seems to fly by.  For instance, I bought the original issue (ASM #258) of the above new TRUE BELIEVERS mag back in 1984 - a whopping 35 years ago.  I can remember reading it in my then-new bedroom in another house in a different neighbourhood as if it was a relatively recent event.  (Yes, you guessed it - I'm trying to avoid saying "as though it were only yesterday".)  As most regular readers will know, my family lived in that other house for just over four years before returning to our previous (and my current) abode, but one glance at that cover (of either printing) and I'm back in that other residence (here it comes) "faster than a fart from The FLASH!"

Seeing it again is like saying hello to an old friend, even though I still have my original issue bought back in 1984.  So I guess I now have two old friends - who just happen to be twins.  (You were expecting me to type something sensible?  This is Crivens! remember - you want sensible, you shouldn't be here!  And besides, at's nearly 20 past 2 in the morning.)  Anyway, if you're not buying this series of comics, you should be (well, most of them anyway) - it'd cost you far more to buy the originals, and some of these new presentations are absolute crackers.  (Below are the two mags side-by-side so that you can compare them.) 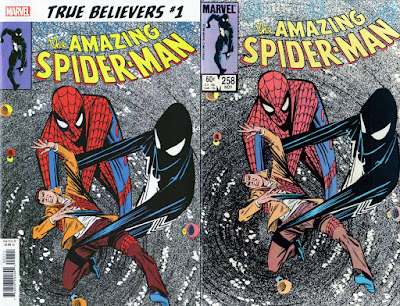 I've just noticed that the original mag doesn't have a barcode box - now how is that possible?  Depending on where it was sold, comics at the time had either a box with a barcode or Spidey's head (or something), so I wonder how many others were issued without a box?  Can anyone think of any other examples?
Posted by Kid at Sunday, July 14, 2019