Here's another little belter from the backyard of bygone bloopers in what I like to call STAN LEE's 'literary lapses'.  This one's from X-MEN #19 where The MIMIC has kidnapped JEAN GREY and is driving her out to his father's old laboratory in a deserted mine.  Take a look - Jean (in her MARVEL GIRL costume) is blindfolded, yet manages to 'see' that they're at a deserted mine and that CAL RANKIN's wings have gone.  What makes that last observation all the more remarkable (if there can be anything more remarkable than being able to see with a blindfold on) is the fact that he's behind her, so that's not something she could have noticed anyway, even with her eyes uncovered.

Also, he says that he wants the X-Men to follow him, so why blindfold Jean at all?  It matters not a jot if she sees where she's going if The Mimic wants to be followed, does it?  What's that you say?  Maybe she's blindfolded to prevent her using her telekinesis?  After all, she can't attack what she can't see.  Well, whether that's true or not, she's unlikely to use it to attack Cal while he's driving in case he crashes, 'cos then she'd be injured as well.  And besides, she could always use her telekinesis to remove her blindfold, just like she did in X-Men #3.  She doesn't need to see to do that.  It just doesn't add up on so many levels.

Stanley, you ol' rascal - you weren't paying attention again, were you? (Probably dialoguing the FF, THOR, and The AVENGERS at the same time as this one.  Hey, maybe that's why Rascally ROY 'The Boy' THOMAS took over writing the mag with the very next issue?) 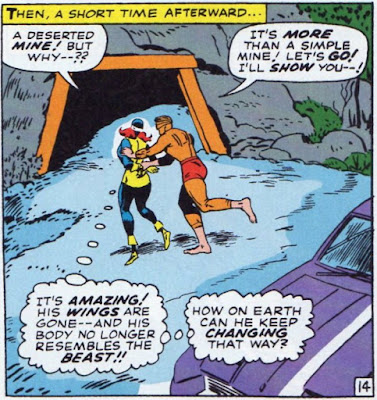 Could be, PW, but I tend to suspect that the blindfold just wasn't obvious in the pencil stages, which is when Stan would've dialogued it before sending it to be lettered. (Pages were lettered before inking back then.) The early X-Men issues are littered with mistakes, usually by Jack, where costumes often change from panel-to-panel. Keeps the readers on their toes though, eh?

There is another option, depending upon how advanced Jean's telepathy was at this stage, maybe she was sensing the details from reading The Mimic's mind?

I'd already considered that idea and dismissed it for the following reasons. If she were reading his mind, she wouldn't have asked him where he was taking her as she'd know from reading his mind. Also, Cal would have absorbed that power from her and realised HE was now able to read HER mind. Finally, Stan would have had Jean think something like "I can sense that his wings have disappeared, etc..." So, an imaginative reply, Anon, but no cigar.