THE DAPOL DALEK HAS MADE ITS MARX... (OR: EBAY SCAMMERS SCANDAL!) 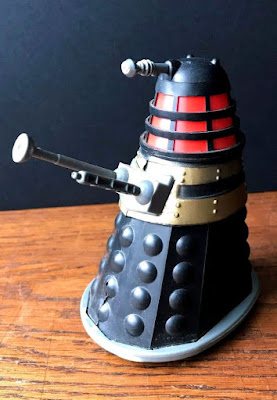 I've said before that I don't consider myself a comprehensive expert on anything, but I know a lot about some things, and here's such an instance.  Back in the '60s, toy manufacturer MARX TOYS issued a 4 inch friction-drive DALEK toy.  They also did a 6 inch version, which resembled their 'bump'n'go' Dalek of the same size.  In the late '80s/early '90s, a company called DAPOL resissued the bump'n'go (with modifications), as well as the smaller friction-drive model, both bearing the Marx Toys symbol.

Dapol gave black Daleks silver/grey chest pieces, silver/grey Daleks black chest pieces, and red Daleks black chest pieces.  As I said, their early releases all had bases the same colour as the body.  They later released them in a variety of colours in what could be described as 'rainbow' Daleks.  The wheels were the same colour as the bases on all their models.  I contacted DAVID BOYLE, the owner of Dapol and pointed out that collectors would probably prefer them to adhere more to the original colour schemes, and shortly thereafter he issued them with the bands sprayed gold, but still with the chest pieces a different colour to the body.  (No problem for me, as when I ordered some more, I simply requested that he send me the pieces in the colours I specified and then I assembled them myself.)

One thing he didn't do was alternate the colours of the wheels with the bases, but that apart, they were pretty much the same as the three Marx originals.  On the bump'n'go toy he'd had to amend the mechanism due to 'health & safety' advice, so I asked him if that shouldn't also apply to the friction-drive toy's eyepiece, which was comprised of two pieces.  In response, he amended the part to one piece, but the front end wasn't as round as the original and I regretted ever mentioning it. 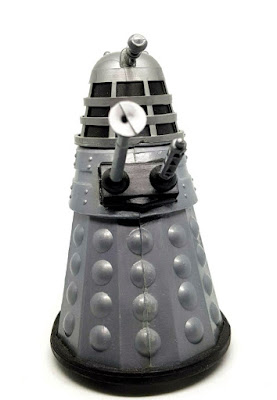 Yeah, very interesting you may be thinking (though I wouldn't bet on it), but what's all that got to do with anything?  Shouldn't there be some kind of point to these blog posts, however tenuous or gossamer?  Of course there should - and there is.  Allow me to explain.

There's been a trend on ebay recently for some sellers to offer the Dapol versions as original Marx toys from the '60s, with ridiculous prices.  One seller apparently doesn't even know the difference between the smaller friction-drive toys and the larger bump'n'go models - or perhaps he does, but just doesn't care.  The Dalek in the first picture is described as 'Vintage Original 1960s Marx Dalek Excellent Condition Bump and go working', and the seller has set a starting bid of £99.99.  I contacted him to helpfully point out his error lest he damage his credibility and got an impertinent reply.  His listing remains unchanged.

The second picture is merely listed as '...rare silver Dalek... Marx toys... stamped on base'.  The seller isn't actually claiming it's an original, but by not saying that it's a Dapol reissue, his listing omits a pertinent piece of information and tends to suggest it's from the '60s.  And his asking price of £50 is far above what an unpackaged Dapol version would command.  Perhaps he isn't aware it's a reissue?  A possibility, but I incline towards cynicism in instances such as this - especially as he hasn't (so far) responded to my informative message to him.  (Update:  The seller of the second Dalek has now been in touch to thank me for the info, so I assume he will be revising his listing.)

I think ebay should 'police' their site more efficiently - there just seems to be too many inept and uninformed sellers (or fraudulent crooks) hawking their wares, and it's a whole lot of hassle obtaining a refund when a buyer discovers that the item he's purchased isn't quite what was described.  What say you, Criv-ites?  Ever been stung on ebay, and did you eventually get a satisfactory resolution?  The comments section awaits your valued input.
Posted by Kid at Friday, July 05, 2019