In what sometimes seems like another lifetime, in a place that can be accessed only in dreams and memory, I started to again collect a weekly comic that I'd bought as a young teenager.  The comic was called SPIDER-MAN COMICS WEEKLY, and in 1979 it shortened its name to just SPIDER-MAN COMIC.  At some stage I gave up on it, but then, in 1984, I started buying it again, probably (I assume) because it featured the first instalment of a comic strip adaptation of INDIANA JONES And The TEMPLE Of DOOM.  By this time ('84), it was called simply SPIDER-MAN, and it was printed on good-quality paper and was quite a handsome publication.

I restarted with issue #590, but #601 was the last to feature the better printing, as the following week, it started using slightly cheaper paper for the insides, and what's more, the height of the comic shrunk by nearly an inch.  However, it now had more pages (36 as opposed to 32) and more of them were in colour, so I suppose it was a fair trade-off.  For some unaccountable reason, I missed three issues (there may have been more, but if so, I acquired them so far back that I've forgotten not having them), which I finally managed to track down nearly 34 years after the fact.  (In case you're wondering, they were #607, 610, and #615.)

The last issue I purchased in this particular run was #621, which I took a look at last week while emptying a cupboard full of comics in a search for some specific numbers of SMASH! from the '60s.  (Didn't have them in loose form.)  I was surprised to see that all three stories in Spidey were continued, and assumed (as with the other formerly missing numbers) that I just couldn't find the next ish in the shops at the time*.  So I looked for it on ebay, found it going for a paltry sum and bought it on the spot.  It arrived today, and I'm glad to see that the wrap-up for all three tales reaches their natural conclusion, so I can now regard this run of comics as complete.

(*Just remembered that I was living down in Buckland, Portsmouth in 1985, from January to around April, so that's maybe why I didn't see it in the shops.  My routine down there wasn't exactly the same as it was back home.)

It may have taken me nearly 35 years, but I'm glad to say that I eventually got there in the end. There's an old saying (which I'll paraphrase) - 'it's better to travel hopefully than to arrive', and in many instances that may well be true, but this case is the exception.  It's good to finally reach the end of this particular 'journey' and write 'close' to an unfinished chapter in my life - when I was less than half the age I am now. What amazes me is that it went by so fast, but that's a song you'll be fed up hearing me sing, so I better not batter the subject over the head again this time around in case you bail out on me for another blog.

When I get time, I'll scan all 32 issues and do another cover gallery for you.  Is that something you'd like to see?  Then say so in the comments section, frantic ones. 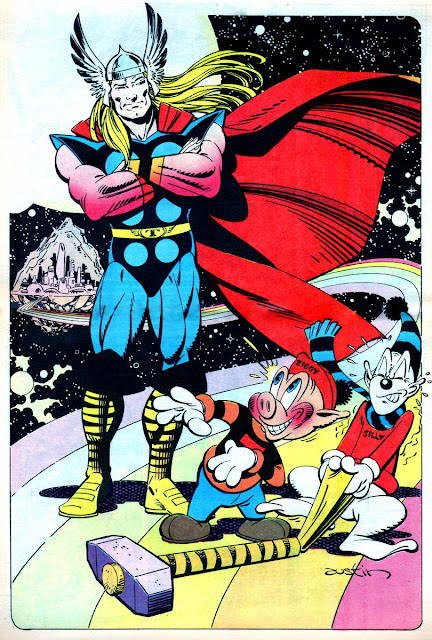 I'd like to see a cover gallery. I read loads of second-hand Marvel UK comics in the mid 80s, mainly because I lived near a shop which had thousands of them for 2p each.

I remember finding the first issue of Doctor Who Weekly there, and the woman who owned it said to me very apologetically "this one is expensive... its 10p". Oh how times have changed!

Considering that the comic cost 12p when it first came out, DS, 10p was an absolute bargain. I've still got the ish I bought back in 1979, and I picked up another one (with free transfers still attached to the cover) a number of years back - probably in the 20th century.

You're right - times have certainly changed. I took a quick look on ebay, and there are several available from around a tenner, right up to £40.

I also got the British printing of the Superman / Spider-Man team-up, the one with the Buscema art, for mere pennies too in that shop, and still have it. Still love that story too, it's just pure undiluted fun!

I've got that as well - might even have two copies. I certainly bought two at the time, but can't remember if I later (much later) gave one away to someone. I prefer the American Treasury-sized version though, which I'm also fortunate enough to own. The spelling 'corrections' in the British edition were extremely clumsily executed. As you say, great fun.