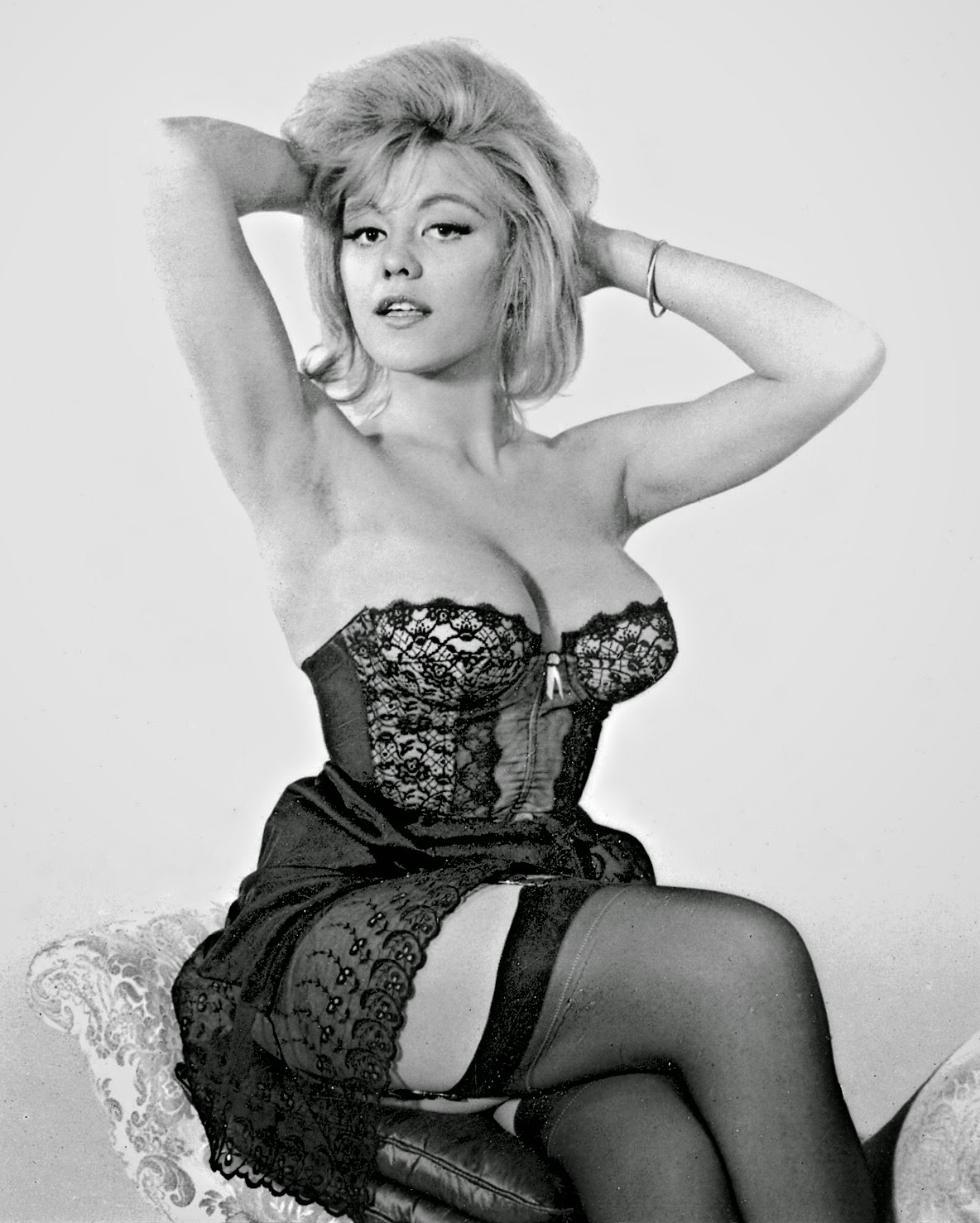 Were I to ask which blonde actress was painted
gold for a well-known JAMES BOND film, chances
are your answer would be "SHIRLEY EATON".  How-
ever, our 'Babe of the Day', magnificent MARGARET
NOLAN, also had her body adorned with gold paint, as
it was her undulating classy chassis which appears in
the credits at the beginning of the 1964 movie.

See?  Educational, as well as titillating.
Posted by Kid at Wednesday, February 18, 2015

It's certainly the one that defined the Bond style. I'd say Connery's best three are (in order of release) From Russia With Love, Goldfinger and Diamonds Are Forever. Moore's best three are Live & Let Die, The Spy Who Loved Me and For Your Eyes Only.

I've always liked 'Moonraker' too. The best Bond is Connery with Moore close behind - I rather lost interest in Bond after Roger Moore left.

Funny you should say that, CJ, 'cos I was swithering between TSWLM and Moonraker, but left it out because of the SF element. Having said that, a lot of Bond movies had SF, even in Connery's time. Talking of whom, I think he was the best Bond for the '60s, but that Moore was the best for the '70s. The Dalton films were tired, but I liked Brosnan's four. Craig has got the fighting aspect covered, but I don't think he's managed to capture Bond's elegance and sophistication.

I've always liked Moonraker precisely because of the SF element - I'm a regular reader of SFX magazine and they always include Bond but I think they feel they have to justify themselves because Bond barely qualifies as SF most of the time. I've never seen any of the Pierce Brosnan ones, he's the only version of Bond I've never seen. I think with Daniel Craig they are trying to move away from the elegance and sophistication because it's seen as a bit dated.

Which is silly of them, because it's part of the brand. Why change something that's successful? If it ain't broke, don't fix it.

Sheldon Lane's book "For Bond Lovers Only" said that the girl in the "Goldfinger" credits was Vicki Kennedy. It turns out that Vicki Kennedy was a stage name used by Margaret Nolan, or maybe vice versa.

Goldfinger sort of set the pattern that was followed by most subsequent Bond films.

You Only Live Twice and Diamonds Are Forever were sorta-kinda SF. Some of the Bond imitators ("In Like Flint," "The Ambushers") also used spacecraft as the MacGuffin.

IMHO, the Dalton films were not bad, but both looked as if they were trying to make James Bond movies for people who did not like Bond movies.

Writer John Brosnan pointed out that YOLT is practically a remake of Dr. No, plot-wise, and TSWLM and Moonraker also have more or less the same plot. The Dalton movies weren't bad movies per se - but they were poor BOND movies, in comparison to the ones which had preceded them. Spot on in your last sentence, TC.