HAVE A 'SMASHING' EASTER... 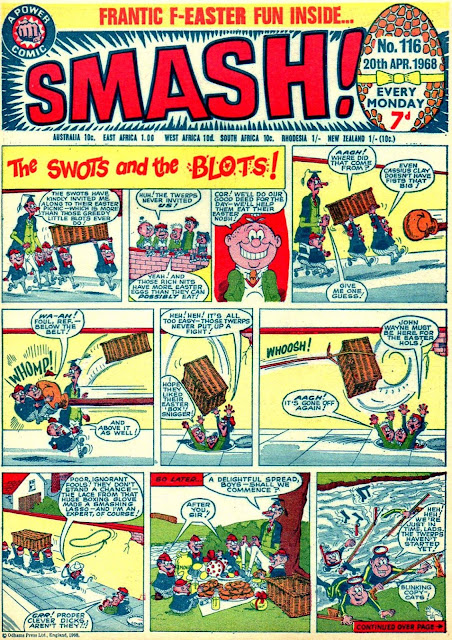 Easter is upon us - and this is the first one I can remember in a long
time where there wasn't at least a Cadbury's Creme Egg waiting for
me to devour when I arose to greet the day. I'll just have to pop out later
and buy a choccy egg of some description before they're all sold out - if
it isn't already too late. Of course, for many people, Easter is regarded
and celebrated as the religious occasion which founded their faiths, but
for most of the rest of us it's just an excuse to gorge ourselves on
lots of chocolate and watch a load of old movies on TV.

Once upon a time, it was also a day for a plethora of this country's
cavorting comical chums to indulge in hilarious escapades involving
giant confectionary eggs, which usually dominated the covers of paper
periodicals such as BEANO, DANDY, BEEZER, TOPPER, SPARKY,
BUZZ, BUSTER, WHAM!, SMASH!, POW!, WHIZZER & CHIPS,
WOW, WHOOPEE, MONSTER FUN, SCHOOL FUN, SHIVER &
SHAKE, TV COMIC and countless others I've no doubt neglected to
mention. Today, only one of those weeklies survives, to entertain us
in isolation with the Easter exploits of DENNIS THE MENACE
and his bombastic battalion of Beanotown buddies.

So, in memory of the kind of Easters I remember from my boyhood
(and up to only a few years ago too, to be honest), here's a selection of
strips from the 1968 Easter edition of SMASH! #116, which you'll
hopefully all enjoy. 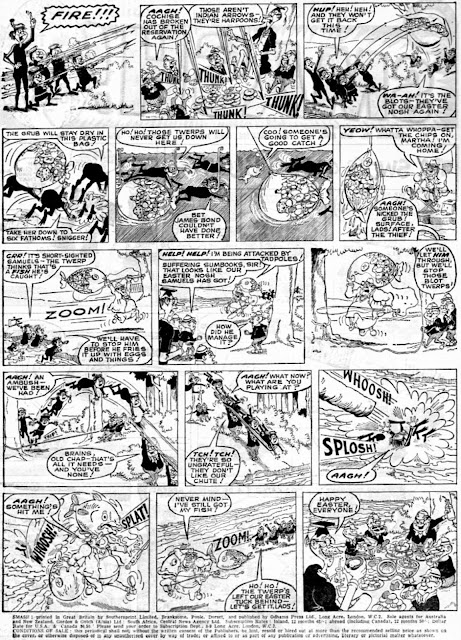 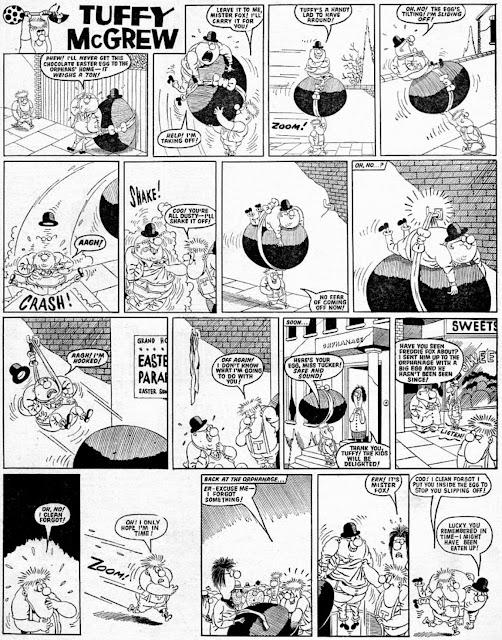 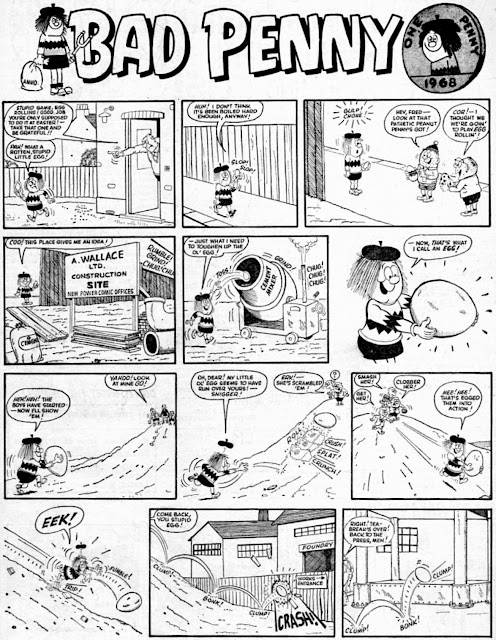 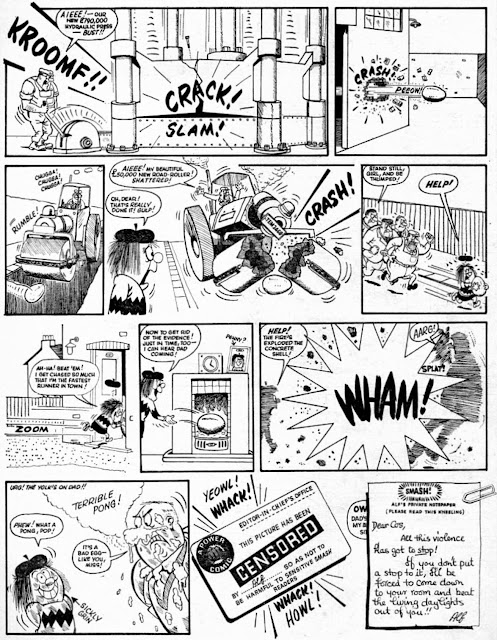 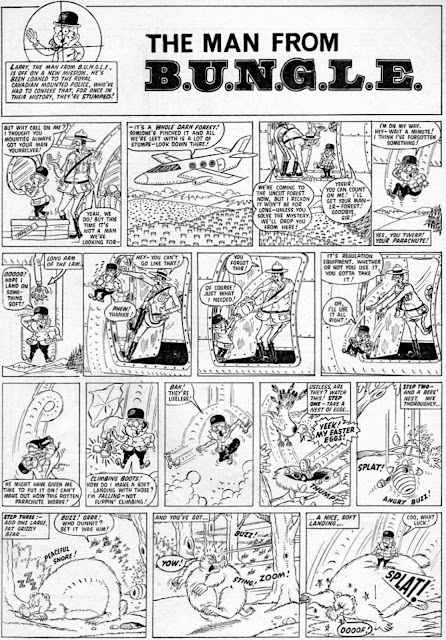 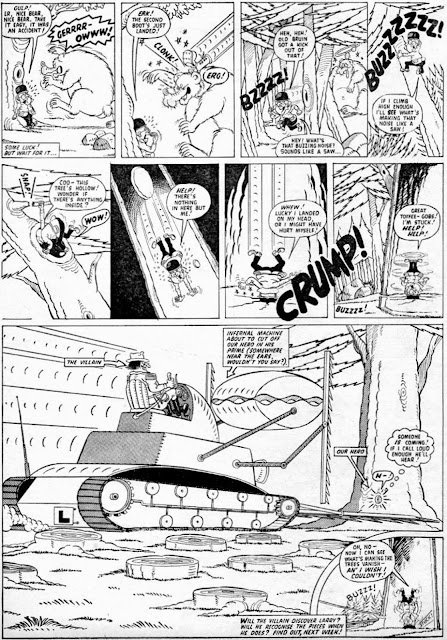 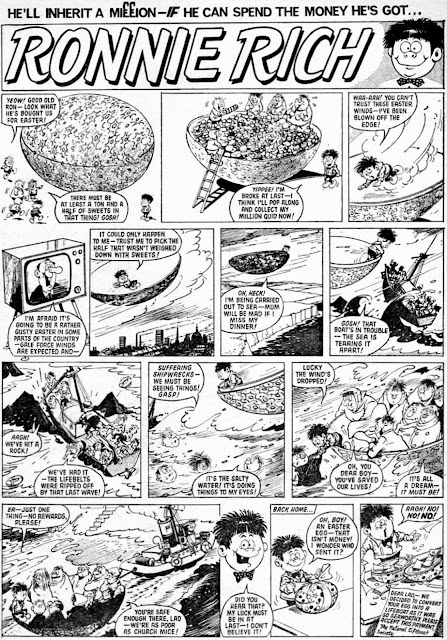 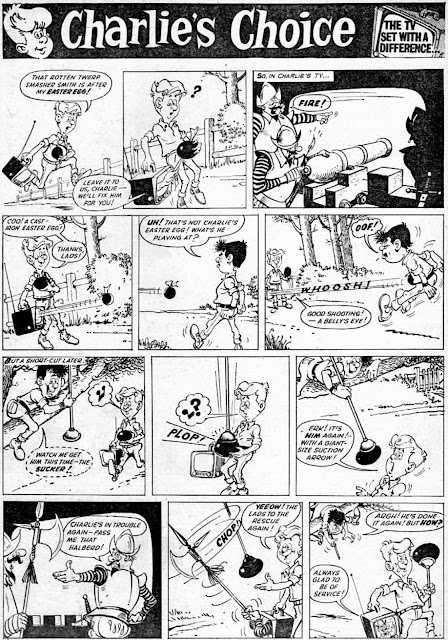 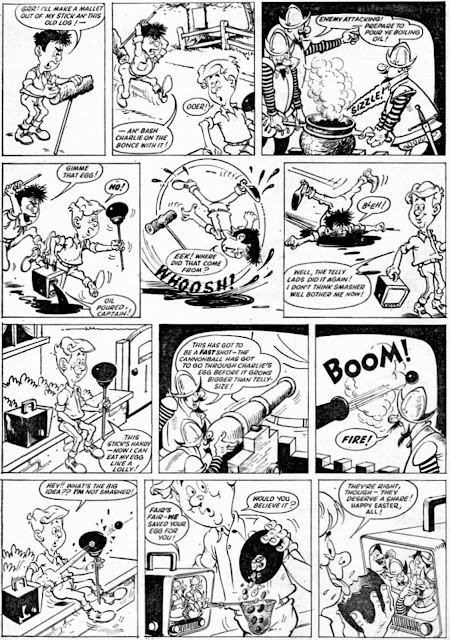 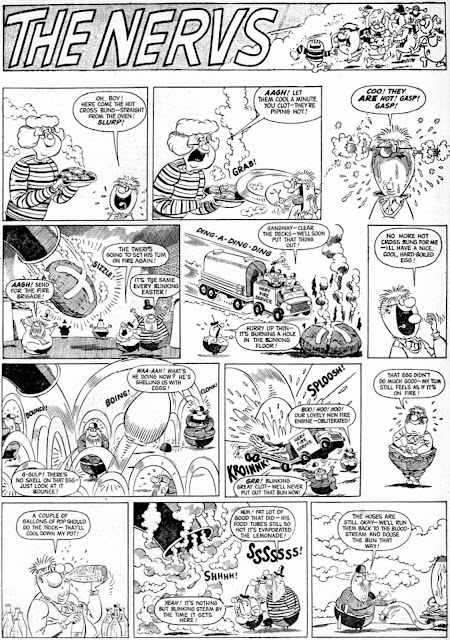 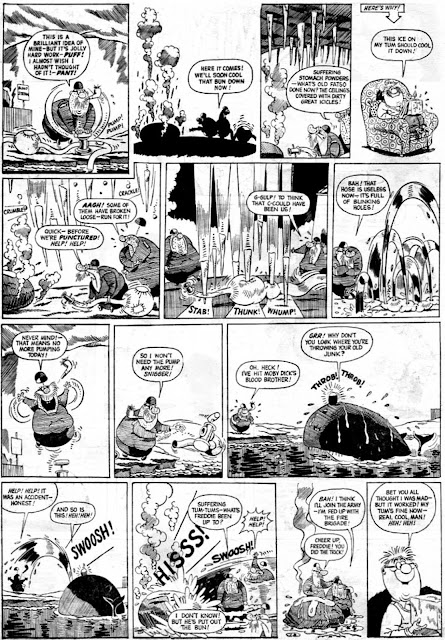 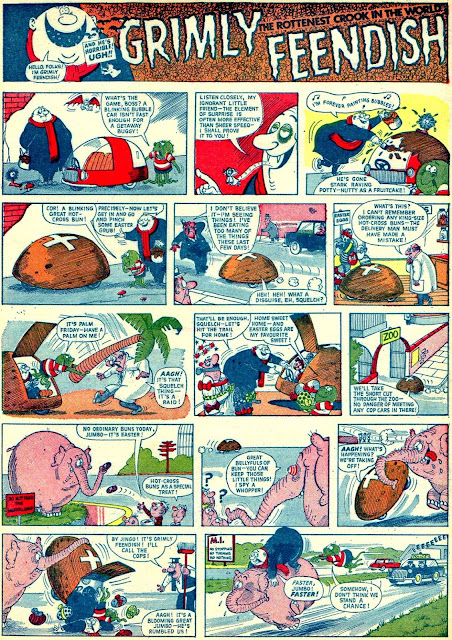 Fantastic! I only own one power comic - #4 of Wham! - and it's brilliant! Thanks for sharing!

Hate to break the bad news, George, but Wham! #4 isn't actually a Power Comic. The name and badge didn't come into existence until the end of '66, so it's only the issues from that point on that are bona fide Power Comics. Having said that 'though, the comic with Frankie Stein's first appearance is a real collectors' item.

Great to see the old weekly comics! I also have just the one issue of Wham! (issue 26) and must have had a few issues of Fantastic, but sadly only a half dozen Johnny Future strips out of them survived the trip through time from the 60s to now. Any chance of more Frankie? I am a big Ken Reid fan and as we are unlikely to ever see a book on him let alone a Frankie collection it's generous souls like yourself that are our only hope of reliving these comic treats. Your blog is one of my regulars each day and the first one I have ever left a comment on. Ditto - thanks for sharing!

Phil, I'll probably print more Frankie strips from time to time. There are a few already on the blog, along with some original art. Another Johnny Future strip coming soon.

Always great to see any old Odhams books so thanks for that - I wasn't aware the "Power comics" icon/badge only came into effect at the end of 66 (and I have a good few of the Odhams books ) Was the artist on the "Grimly Feendish" (what a great name) strip the same guy that did "Percys Pets" (I assume its not Leo Baxendale) - Ken Reids Frankie Stein is perhaps my all time favourite UK (may favourite anywhere) humour strip just amazing so would be nice to se more when you get time - If "PhilSee" isn't aware apart from your blog, Lew Stringers old blog "Blimey" and especially the "Kazoop" blog have a great selection of Reids Frankie Stein stip - McScotty

That page of Grimly certainly looks to be the work of Stan McMurty, who drew Percy's Pets. Terry Bave also ghosted the strip on occasion, when presumably Bax fell behind.

Talking of Frankie Stein, I enjoyed Robert Nixon's take on the character, but I always wished IPC had retained Micky as part of the mix. The Reid strips have a lunacy which nobody else quite captured.