FOREVER IS A LONG, LONG TIME...

Following on from the KIRBY-fest of OMAC art in the previous post, we now continue with every single cover to DC COMICS' 1970s title The FOREVER PEOPLE.  Unfortunately, there was nothing 'forever' about the comic, which lasted only 11 issues before being blasted through a BOOM TUBE into oblivion.

Although I eventually grew to enjoy most of Kirby's DC mags, I initially resisted buying them because they just seemed out of step somehow.  The characters were rather dull-looking and didn't much appeal to me (the BLACK RACER, anyone?), lacking the visual inspiration and impact of Jack's work over at MARVEL.

They'd probably have worked better as supporting characters, as none of them - with the exception of MISTER MIRACLE - were really strong enough to carry their own mags, a fact which the comic-buying public of the time seemed to be in agreement with - as witnessed by the relatively rapid cancellation of the FOURTH WORLD series before it could be fully developed.

But that was 'yesterday';  today, we look at Jack 'King' Kirby's brave attempt to create new worlds for Marvel's 'Distinguished Competition'.  Alas, his efforts were considered failures back in the day, but echoes still reverberate down through the years and will probably do so for some time to come.  That's probably as close to 'forever' as anyone can hope to expect. 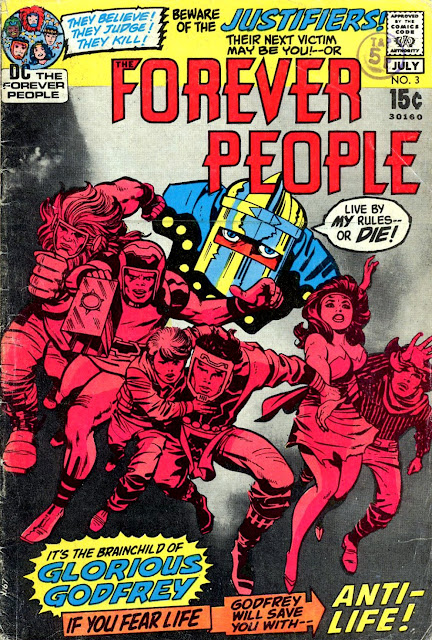 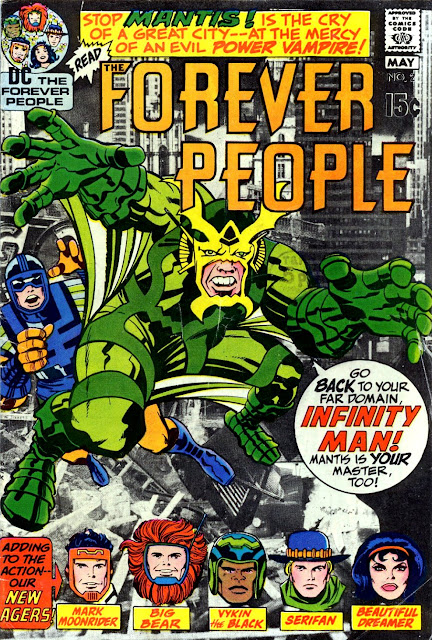 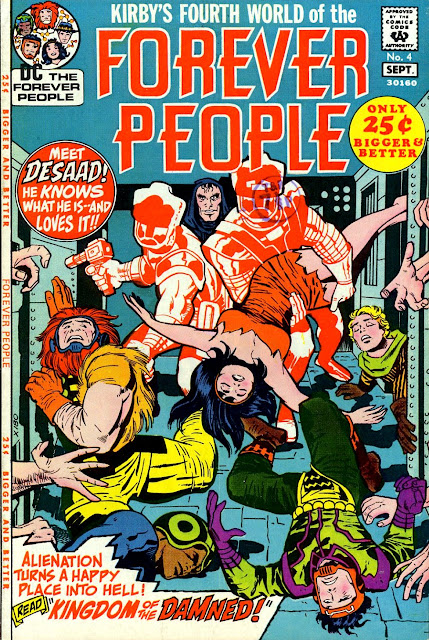 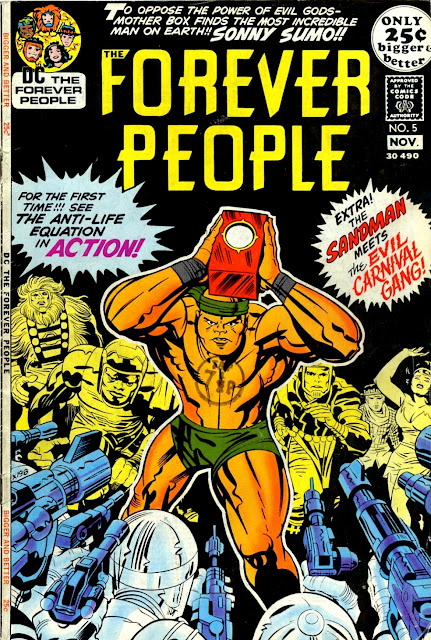 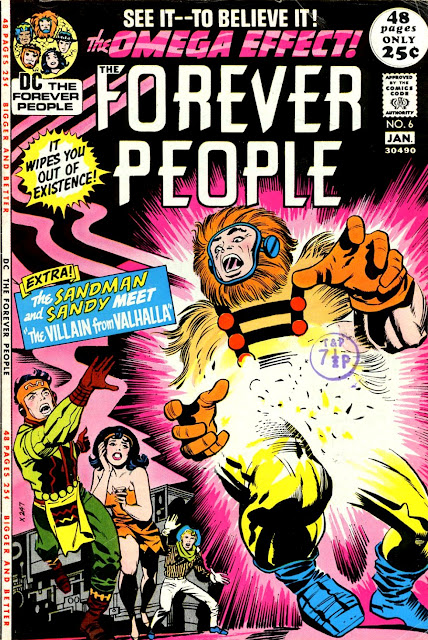 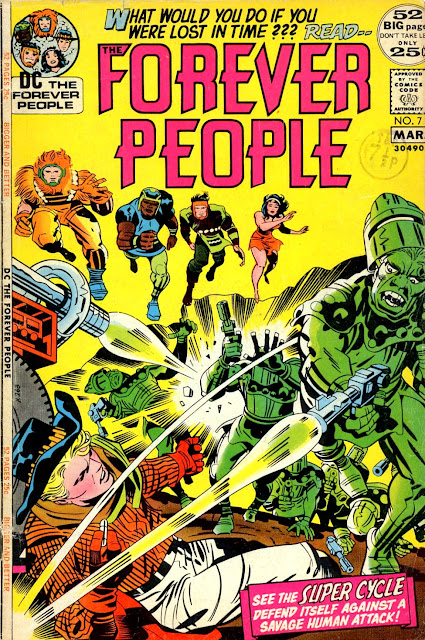 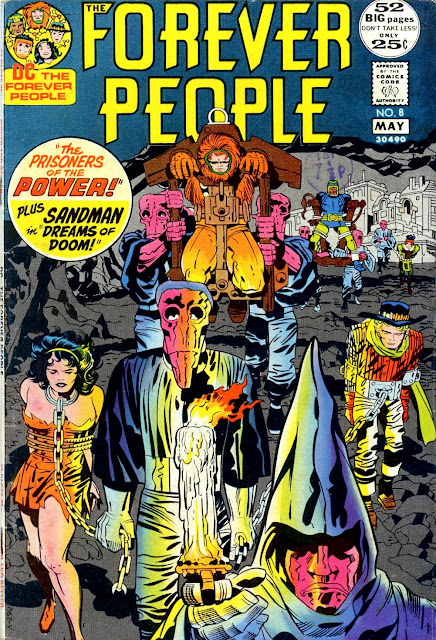 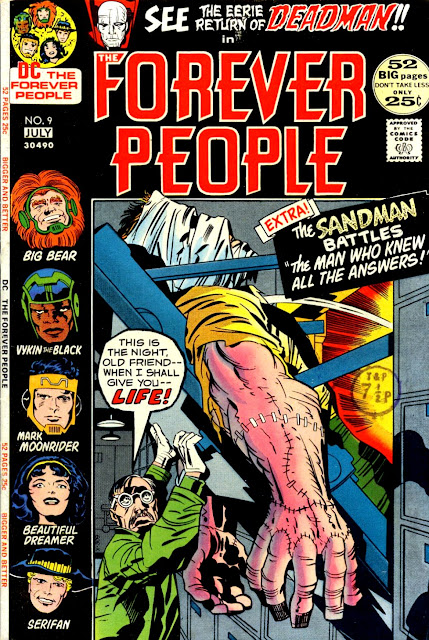 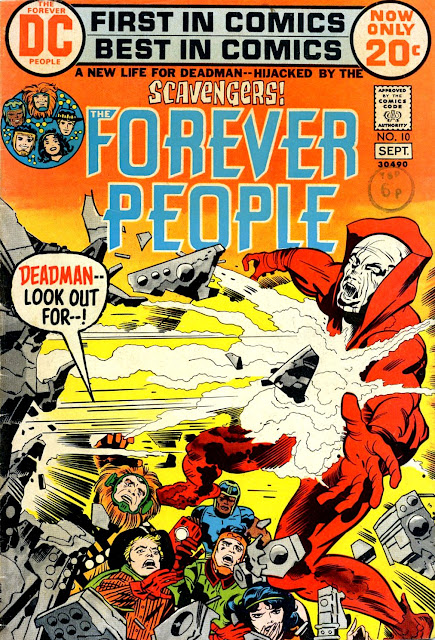 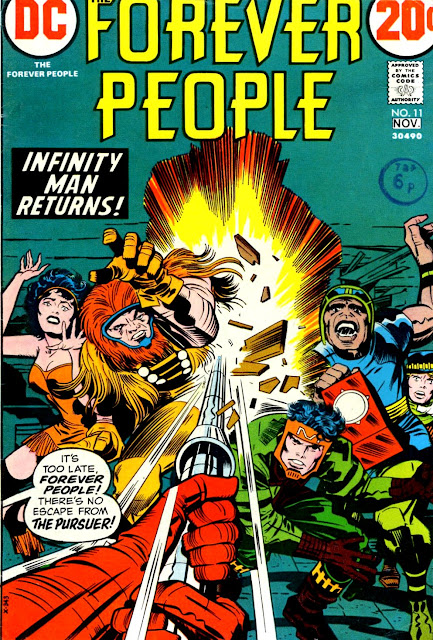 Kirby's Fourth World experiment came at an interesting time. While for this reader, the twenty-five cent packages were fantastic reads loaded with both old and new content, that shift utterly changed the way the market operated and Marvel swooped in under DC with lower prices and stole first place and did not relinquish it for many many years.

It had to be tough medicine for DC to have landed the "King" only to see him not only unable supersede the sales success but fail to even match it. Given their perspective it's possible they blamed him for the failure, since surely their own decisions about pricing couldn't have been at fault.

The Forever People were the oddest pick in Kirby's litter for sure, the one book I had the hardest time plugging into. I enjoy its charms much more in retrospect, but I was likely the target audience for this book, and frankly at the time it left me a tad cold.

Part of the problem (I believe), Rip, is that Carmine Infantino had bought into the rumour that Jack was responsible for every good idea and character at Marvel, and that the best way to spite Marvel was to steal their 'main man'. That way, surely, DC would soon overtake Marvel in sales.

Trouble was, Stan Lee was responsible for the way Marvel comics 'read' - and none of Jack's DC mags 'read' like a Marvel one, hence the disappointment of those who had followed him over to DC.

Of course, as you suggest, the higher price of DC mags didn't help, but - personally speaking - I never let that deter me from buying a mag that interested me. No doubt it did others 'though, but perhaps the damage would have been lessened if Jack's books had hit the ground running. They just failed to score, in the main.

Thanks for the interesting comments.

Never did like the 1st issue cover. There's something a bit: "The Monkies" about it that I've never shaken off. I have a similar problem with Kurbert OMAC you posted recently but I think that's one a lot of people share. Issue 3 is one favourite every covers, god knows why that should be, it seems pretty simple but it really tugs me in.

I'm not sure if anyone else felt this way, but as a 13 year old avid Marvel Comics reader at the time, I was loathe to be seen with any of Kirby's DC comics because the art looked so "childish"... and on the rare occasion that I did buy one, the dialogue struck me as childish as well. This was the exact opposite of the direction Marvel was going in (their titles seemed to be growing up with me!). Eventually, when I was in my early 30s, I did belatedly start to collect Kirby's DC comics, and at that age (not having to worry about peer pressure, and with the beginnings of a sense of nostalgia) they struck me as phenomenally brilliant. You have to learn to appreciate the art on its own terms, take the robotic dialogue with a pinch of salt, and get your head round the wacky plotlines. And then the New Gods et al become masterpieces. But you can't sell comics by aiming them at nostalgic 30-somethings 20 years in the future! They have to be aimed at teenagers (who, in the the relevant 70s, would have found the artwork embarrassingly naive) or at pre-teens, who simply wouldn't have understood or been engaged by the offbeat storylines.

I kinda like the ones where Beautiful Dreamer is prominent - especially #8.

There is, of course, a great deal of merit to what you say, Andrew. However, I think the basic problem was that they just didn't seem to be as good as what he had done at Marvel.

I'd stop short of calling the 4th World titles 'masterpieces', but they were good, solid reads once you adjusted to Kirby's idiosyncratic scripting. I still preferred his FF and Thor 'though.

I wouldn't disagree at all - even the last 10 or 15 of Kirby's FF issues (after he allegedly lost interest and was already working on the Fourth world) are more enjoyable reads than any of the DC work. The peak of my interest in the Fourth World dates from the early 1990s, when I really did feel they were masterpieces... although I suspect I was injecting a lot of my own interpretation into them. After another 20 years -- you can give me the FF or Thor every time!

The great thing is - with all the reprints, readers can enjoy both his Marvel AND DC work - it doesn't have to be a case of 'either or'. Lucky readers, eh?

I loved the idea of all Kirby's 4th World Series books at DC they looked so cool at the time , but (like a few folk have already said) once I bought a few and read them they left me pretty cold -l loved the covers to all but OMAC..who for me was one of Jacks worst books, despite being a really cool idea (however I thought Keith Giffen's recent version (sadly cancelled) was really good). I thought Kirby's Demon, and (especially) Kamandi were excellent comics still worth a read today (then again I loved the Eternals and his run on Black Panther at Marvel) I choose never to discus his "Super Powers" comic"!!! - He did need Stan (and vice versa) but for me Jacks still the "King" - As always great stuff thanks for showing these covers again - MCScotty

Glad to hear that you're enjoying them, McScotty. Much more to come.

Well I was about seven when these were released,I would never have guessed that.
I had various issues of the DC Kirby books and loved them.
It was Kirby and I was just staring in wonder.
I was not at that time interested in the writers,so did not pay as much attention to that side of things.
i loved the inking style of Omac as well and kamandi was just astounding to look at.I remember enlarging the cover with the killer whale,and doing a good job of it too.
Well I must have been about nine when I had them.

The comics from childhood are always the best ones, eh, Baab?

I was a pre-teen and I was engaged by the off-beat storylines. Mr. Miracle was probably my favourite with New Gods in second place. There was a darkness and brutality in the Kirby titles that mirrored, to my mind, the adult themes of the nascent barbarian and horror books from Marvel.
Forever People was my first discovery of the Fourth World but early-70s South Lanarkshire seemed to see so few copies I had to make do with Jimmy Olsen: the only one I did find a bit juvenile, even at nine or ten.

Welcome back, Dougie. Computer problems sorted, I hope? Funnily enough, Jimmy Olsen was probably MY favourite - no doubt because I knew who Superman and Jimmy were. I worked my way onto Kirby's other DC titles from there. I could never really relate to any of his other characters 'though, with the possible exception of Mister Miracle.