SO WHO ARE THE MEN IN THE RED & BLUE SUITS? 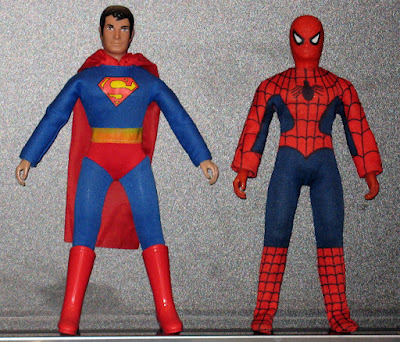 Behold - Superman and Spider-Man together.  Supes I've already shown you (he's a 2016 reissue), but I received the genuine 1970s Mego Spidey only today - a gift from a generous benefactor.  I now have about 15 or 16 8 inch action figures, so it's probably time to call it a day.  (At least until another one comes along that I really must have.)  Yes, I'm scraping the barrel with this post, but I thought it was better to give you something rather than nothing, given my lack of blogging activity recently.

No reason why we shouldn't have a caption.

Spidey: "It's all right you saying 'jump', Superman, but I'm fresh out of web-fluid and you can fly, ya big buggah!"

I've never understood the popularity of Mego action figures (dolls lol) among collectors . But nice of someone to give you Spidey I know they're collectable.

No, no, no, McS - you err, not knowing the difference. Dolls are for girls so that they can undress them and change their fashions and comb their hair; dolls have limited points of articulation and look a bit soppy (Barbie and Ken anyone?) and exist mainly so that girls can re-create domestic or romantic situations in their minds, to say nothing of their bedrooms.

Action figures on the other hand, exist so that grubby wee boys (and I used to be one) can grab them by the ankles and throw them up in the air with a hankie tied to them to act as a parachute. Any changing of clothes (usually uniforms) is simply to equip each action figure with the necessary outfit for whatever mission he's getting sent on in our imaginations. They usually have multiple points of articulation and are the bees' knees when it comes to play value.

One day the world will comprehend the distinction between dolls and action figures. Until then - rrrraaaaaassssspppppppppp!!!!!!!!!!

When I was about 10 my grandmother saw me playing with my POTA and Star Trek action figures and she said "I didn't know you played with dolls". I was absolutely mortified and exclaimed "They're NOT dolls!!"

Grannies, eh? What do they know, CJ?! I hope you took away her Breakaway.

Alert Gerry Conway! A team-up is happening! Love the sleeves on Spidey!

I knew there could be a reference to the '70s Supes/Spidey team-up in that photo somewhere, RJ.

You'll have to explain what a "Breakaway" is, Kid. Anyway my gran gave me weekly pocket money so she was allowed to say whatever she wanted as long as she kept doling out the cash :)

That photo calls for a caption so...

SUPERMAN: "At least MY costume is faithful - since when did Spider-Man have sleeves??"

A Breakaway is a chocolate biscuit - still available today - and the TV tagline was "Don't take away my Breakaway!" They were/are a similar size to a Kit-Kat, but not divided into two fingers.

Asda were selling caramac breakaways last year. They were delicious. Not seen them recently though.

For the life of me, I can't remember whether or not I had one, but they certainly sound delicious.

Kid, I had a vague idea that Breakaway was some kind of chocolatey biscuit but I don't remember the TV tagline at all. Next time I'm in Tesco I'll have a look for Breakaway.

Very nice with a cup of tea or coffee, CJ. I'll have to see if I can track down some Caramac flavoured ones, but the 'normal' ones are a nice wee treat.

I love the Superman figure. I had the Spider-Man punching action version but I was err 'encouraged' to sell it when I got married. I put it on eBay for £30 thinking no-one would be daft enough to pay that but someone was! Bye bye Spidey. ☹️

I noticed Stan the Man was here, quite a good likeness I thought:

That's the punching action Spidey in the pic, M. The Mego Stan is on the blog several times over, so type Mego Stan into the blog's search box for some hopefully interesting results.

Ah yes, thanks Kid. Apologies but I am new to the Blog and haven't looked through everything - there's a lot for me to catch up on, I am so late to the party! Comics, toys, babes and a pointing out of LS's shortcomings. What's not to like? He blocked me on Facebook simply because I had a different opinion. I haven't missed him!

You know what could happen now, M - some people will think that you're only a figment of my imagination. Anyway, glad you're enjoying the blog. I never block anyone for disagreeing with me, only those who are rude or abusive about it.

I was in Tesco this morning, Kid, and they do indeed sell Breakaway so I bought a pack of 8 bars. I'll probably save them for the long Jubilee weekend next week.

And where's MY Breakaway, CJ? Long Jubilee weekend? Does that mean street parties? Spare us.

Does anyone remember an advert which appeared in comics in the mid70s for Spider Man Web shooters which actually fired some sort of web?

I've always wondered what the stuff they shot actually was. Now, in adulthood I'm guessing they were just glorified water pistols, but had anyone ever seen or owned them?

I remember them, DS, and there may well be an ad page on the blog with a small pic of them. I seem to recall it was some kind of dart they shot out, with a piece of imitation web attached to it, but I'm not 100% sure.