IS THERE A ROBOT IN THE HOUSE - WITH A DOCTOR? YES, THERE IS AS IT HAPPENS... 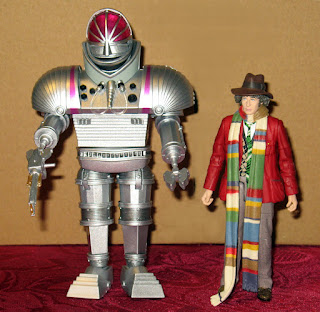 Being a collector who buys toys but doesn't play with them is, I suspect, a bit like having a harem and not availing oneself of the 'goods'.  That's how it seems to me anyway.  However, one can still derive pleasure from looking as opposed to 'touching', so I suppose both pastimes are not quite as pointless as they might seem.  Anyway, you didn't drop by for snippets of philosophical wisdom, so let's forge ahead.
I've always wanted a model of the K1 Robot from a 1974 Doctor Who storyline, but I didn't buy the Denys Fisher version when it was first issued in, I think, the late '70s (might've been earlier, but that was when I first became aware of it).  However, I saw the above figures (by Character Options Ltd) in my local B&M store a few days back and snapped them up.  (Mainly for the Robot it has to be said.)
Just goes to show that if you wait long enough, things will come around again.  Okay, I've waited 44  years, but it only seems like a fart from The Flash away.  Let's be honest, aside from The Daleks, most Doctor Who monsters were rubbish back during the show's original run, but I always felt the BBC hit the bullseye with the Robot's design.  What say the rest of you Crivvies, if anything?  Go on - leave a comment.
Posted by Kid at Sunday, May 29, 2022

This was the robot from 'Robot' - Tom Baker's first ever Who story!

I don't agree that most Who monsters were rubbish - true, the BBC had a limited budget but the ideas for the monsters were very inventive.

The ideas perhaps, CJ, but the realisation of them - nah!

"Robot" was one of the very first Doctor Who shows I got to see and despite its clunkiness at times remains a favorite. Doctor Who creatures were par for the course at that time and I ask only that you take a look at the varied critters and aliens created for Irwin Allen's efforts some years before this run of Who.

The only thing I remember from any of Irwin Allen's shows, RJ, is B9 (another robot) from Lost In Space. He was another good creation which made for some great toys.

I'm not really that interested in Dr. Who, I liked it as a kid in the 1960s early to mid 1970s but pretty much grew out of it after that ( although a few of the newer series I saw from Eccleston to Tennent were good). Anyway pre mid 1970s I always thought the Cybermen ,Ice Warriors and Lynx were scary (are they considered monsters). I find today's models\toys like these are quite aesthetically pleasing so I can understand adults liking them I've been tempted in picking a couple myself although not Dr Who, but some of those smaller Japanese robot replicas (I already have ome)

On the topic of Doctor Who monsters - for my money I think a lot of the creatures and aliens in the Jon Pertwee era (my most fondly remembered era) were well done and certainly impressed me at the time. Creations such as the Draconians, Silurians, Axons, Autons, Sontarans and Sea Devils.

When I collected Doctor Who figures I managed to acquire a few of these in plastic, along with versions of them from the figurine part series. never managed to get the Robot though.

My main interest in Dr. Who is The Daleks, McS - they're what made the show, in my opinion. As for Cybermen, I always thought they looked like an alien accordion band and I was never too impressed by them, though the modern incarnations are better. I sort of liked the Ice Warriors, but the heads gave it away that they were guys in suits.

It always bothered me that the Sea Devils wore what looked like long-stringed 'vests', PC, which surely must've impeded their swimming. They should've gone down the 'Creature From The Black Lagoon' look, but that would probably have blown the budget. The designs of some of the others you mention were okay, but it was the way they were executed that sometimes let them down, I thought. I was always aware it was a guy in a costume.

Kid, the Sea Devils returned in the recent Dr. Who Easter special but they weren't wearing their string vests this time.

Don't tell me that this time they came wrapped up in newspaper, and sprinkled with salt and vinegar, CJ.

I once took ownership of a broken Palitoy talking Dalek, and a little technical know-how (ie poking around with a screwdriver and hoping something would happen) managed to get him (yes, him) talking again. No idea where he is now- hopefully he found a good home.

On the subject of Cybermen though, I would argue that the Capaldi story with the original cloth-faced Cybermen was the only interesting and effective Cyberstory since their debut in 1966.

I really should press the button on top of the head of my Palitoy Talking Dalek more often, DS. The 'record' freezes up through non-use, and it takes a fair bit of time to get it working properly again after a period of inactivity. I have to just keep pressing the button repeatedly for ages until it comes to life, though once it's working again, it operates after a single push - until it freezes again if I neglect it for any length of time.

Strangely enough, I can't recall whether or not I saw that Capaldi episode - it doesn't ring a bell.

These are great, I'll have a look in B&M next time I go. I've got the Denys Fisher toys (I must have had them Christmas 1977), the only one I don't have is the Leela doll, I guess Mom thought I shouldn't or wouldn't want to play with girls' dolls. As an adult now, it would have been nice to have Leela, so to speak, just to complete the set. I've still got the boxes as well which leads me to a question. We all know that toys in original packaging are worth more but it looks as though you have removed the toys from the casing. I'm in two minds when I buy something new, whether to open it or to leave it in pristine condition and just admire it. What's your preference Kid? I've got a few Star Wars toys in the loft from Empire Strikes Back era, I wish I'd left them in the packaging now. As for modern toys they seem to be mass produced and not worth as much?

The Giant Robot is spot on. As for Doctor Tom, whenever I see a model of him, I can't help but think of the geezer from The Flying Pickets. So sad.

I keep some toys in their boxes, some I remove - though I carefully preserve the boxes. When it comes to toys in bubble packs, I carefully and neatly slice (using a craft knife) around the clear plastic bubble in a way that isn't conspicuous, so that I can put the toy back and store it away if I decide to. I don't really concern myself with an item's potential monetary value in the collectors' market anyway.

I'm informed by Character Options that this item is exclusive to B&M, so I hope you can track one down.

I've got a local B&M too but I've never gone in there, which is a situation I must remedy!

Quite a useful store, CJ, and the prices are mostly reasonable - especially when it comes to toys.