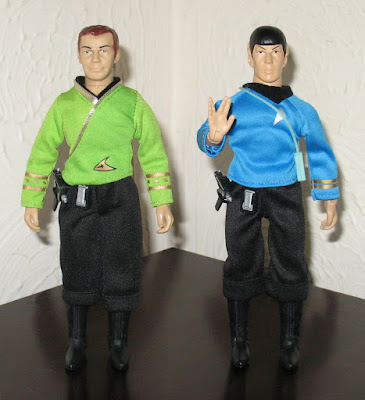 I love Mego figures, of which I now have a baker's dozen.  However, one thing I've noticed is that there's always at least one joint - either elbow, wrist, knee or ankle - which is a bit slack and won't hold its position.  (Sometimes there can even be two.)  When Mego first started producing their action line, the joints were secured with aluminium rivets, but before too long, they were replaced by plastic pegs to hold the limbs together.  I've found that by disrobing the imperfect part and gently (and carefully) pouring boiling water over it, it becomes more malleable; pressure can then be applied to effect a tighter fit, whereupon a stream of cold water will secure it, resulting in a better grip where one part of a limb's 'hinge' meets the other.

Anyway, thought you might like to see two recent acquisitions - Captain Kirk and Mr. Spock from Star Trek.  The first was bought for a mere fiver from a local B&M store, the second was purchased via eBay for just a tad over twice that (not including p&p), so they didn't break the bank.  Feel free to try and think of a humorous caption for the intrepid pair - no prizes other than the satisfaction that comes from making your fellow Crivvies smile.  Well, what are you waiting for?  Be funny!

Kirk: "Is that a shoulder bag you're wearing, Spock?  I hope you're not 'on the turn'!

Spock: "See the gap between my fingers, Captain?  That's the size of your penis - fully erect!"

Kirk: "And it's been swollen like that all week!"

Update: Uhura has now joined her colleagues.  Looks nothing like Nichelle Nichols in face or figure, but, were she real, I'd still have a go at chatting her up.  If you want to suggest a caption for this pic, feel free.  Here's mine...

Kirk: "Actually, Spock, your date has turned up.  She's a shape-shifter from the planet Plastox and she's taken the form of your tricorder.  C'mon, Uhura - let's boogie!" 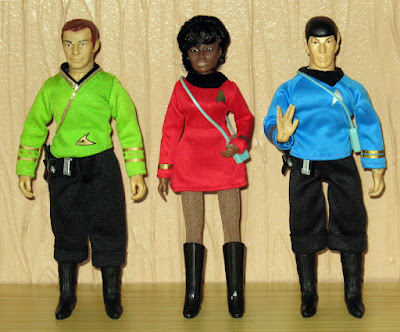 Spock is saying: "Well, I know I'm meant to be Spock but who are you supposed to be?"

(because the Kirk figure looks nothing like Kirk geddit?)

I'll try and think of some more later.

I think it's not a bad likeness of Kirk, CJ, but it's better from some angles than others.

Kirk is saying: "Stop waving to your fans you big-headed git - I'm the star of this show anyway".

Kirk is saying: "Fancy a shag? I'm bored of all those green-skinned alien women and it's the 23rd Century so we're quite progressive nowadays".

Spock is saying: "Do you realise we have no genitals under these costumes?"

Good grief, CJ - are you suggesting a bit of 'Kirk-Spocking'? I thought you were too innocent to know about such things. On the subject of who the star of the show was, I think Shatner was a little annoyed by Nimoy's popularity. Same as Robert Vaughn was of David McCallum in the Man From U.N.C.L.E.

I'm afraid that I can't come up with anything funny this late at night, Kid, but Shatner was definitely the star of the show, despite (or perhaps because of) his pomposity and smugness. I always think that original Star Trek had much in common with Dad's Army......Kirk as Mainwaring ; Spock as Sgt Wilson ; Bones as Jonesy ; Scotty as Fraser ; Pike as Chekov..... the group dynamic is the same.

Perhaps - though I'd say that Mainwaring didn't really have a clue, while Kirk did. "Don't tell him, Pike!" Captain Pike maybe?

Kirk is saying: "We just need Scotty, Chekov and Sulu and then we could start a boy band - we're already plastic, brainless and gaudily-dressed so we should be a big hit with teenage girls".

Kirk is saying: "I must have a word with the Enterprise laundry - this shirt was yellow yesterday".

Spock is saying: "This is most illogical, Captain - we were meant to beam down to Gamma Eridani 6 but we appear to have landed in a bedroom in Scotland on the planet Earth. I've already spotted the Daleks and Peter Rabbit so let's set our phasers for kill".

Spock: "Where is Uhura? There's not enough box-tickers in this picture!"

Incidentally you can get Uhura for a fiver here:
https://shop.eaglemoss.com/hero-collector/star-trek/mego-lieutenant-uhura-star-trek-action-figure?gclid=Cj0KCQjwyYKUBhDJARIsAMj9lkHjFeEKMRguIAqgNFjHTpBEgWZGbcBL50fJhE_bJw1bi2ZnZB8y-IwaAqF2EALw_wcB

I'd say those plastic brainless thickos are too articulate and long-winded to make a boy-band, CJ. And it's not my bedroom, it's a small table on the landing halfway up the stairs. Let's have some more from you.

That's where Scotty, Chekov and Sulu come in, M. I'm off to look at that link. Ta.

That's her ordered, M. Looks nothing like Uhura though.

I thought exactly the same, you'd think they'd make a slight effort at a reasonable likeness. That could be a good idea for a future post - worst action figure lookalike!

Maybe Nichelle Nichols wouldn't give her permission to use her likeness, or wanted too much dosh (assuming she was able to demand some)? The estate of Bela Lugosi refused to grant permission to use his likeness on Dracula toys unless the manufacturers met their monetary demands.

KIRK: "I don't know why the Enterprise disco is so poorly attended tonight".

SPOCK: "This camping trip was a nice idea, Captain, but we should have brought a tent and camping equipment".

KIRK: "Take us to your leader. You say your leader is Boris Johnson? OK, we'll skip it.

KIRK: "Mr Spock, I know your hand gesture means 'live long and prosper' on Vulcan but here on Rigel 4 it means 'f*ck off you ugly d*ckhead' so please stop using it".

KIRK: "Our new career as a comedy double-act starts here - I'll do the gags and you can be the straight man".

SPOCK: "Greetings people of Earth, live long and prosper. We come from the 23rd Century when Mankind will travel the galaxy seeking out new life and new civilisations. Things will be very different in those times to come but Coronation Street will still be on the telly".

SPOCK: "Captain, I have sympathy for Ukraine too but I don't think it's a good idea to lend them the Enterprise".

KIRK: "Lt. Uhura will soon be joining us but I can't pat her bum or make saucy remarks now that the #MeToo movement has come along. Curse those pesky feminists".

SPOCK: "Captain, have you still got that pack of fun-size Mars Bars because I could murder one".

KIRK: "Mr Spock, for the millionth time, you're doing the 'Stop In The Name Of Love' hand gesture all wrong".

Keep 'em coming, CJ. By the way, Uhura has now arrived and will be appearing on the blog later today sometime. That's a super-swift delivery - they must've beamed her down.

Wow that was fast delivery! Warp factor 9! If your theory about Nichelle Nichols likeness is correct I reckon Joan Armatrading will be suing very shortly!

I reckon Joan Armatrading could only sue if the figure was being marketed as her, not someone else.

Congratulations on the warp-speed arrival of Uhura, Kid, so to celebrate here's a final batch of captions...

KIRK: "Psstt Spock - she looks nothing like Uhura so she's obviously an alien shape-shifter but don't tell her she's crap at disguises or it might hurt her feelings".

SPOCK: "Now that SHE'S turned up we can't tell any more filthy jokes".

UHURA: "So when do you want me to start on the cooking and cleaning?"

That last one won't make you popular with the feminists, CJ. Who cares about that though, eh?