With the arrival today of two comics, I've now completed my collection of 25 issues of Superman's Girl Friend Lois Lane, which contained Rose And The Thorn from #105 to 130.  (Number 113 was a Giant-Size reprint issue of earlier tales.)  I had only a dozen different issues (some in sequence), which I've owned for decades, but over the last couple of weeks or so I acquired the 13 mags I was missing and can now catch up on the stories I should've read around 50 years ago.  I also took the opportunity to upgrade certain issues, so though you've seen a few of the following covers on Crivens before, some of the presentations in this post are superior.

It's a strange but rewarding feeling to complete something begun almost half a century ago, like finally fulfilling 'unfinished business'.  To be able to go back, even if only in my mind, nearly 50 years to the early '70s is like time travel of a sort, and that's exactly what it feels like to me.  I can imagine, almost to the point of remembering, buying the issues I never actually had from long-gone shops where I purchased the ones I did own.  It's like rewriting part of the past to make it not how it was, but how it should've been.  Can any other Crivvies relate to that?

Anyway, I've got just over a handful of LL mags still to show, some earlier, some later, but I'm currently waiting for three upgrade issues to arrive to replace a trio that are a little the worse for wear (should get them within the next week I hope), and when they're in my possession I'll show them on the blog for all to see.  Meanwhile, without any further ado, here are all 25 issues of LL (plus a Giant reprint issue not featuring R&T), behind which compelling covers (and even on some) is displayed the beautiful Thorn, alias Rose Forrest, perhaps the only character in comics who was unaware she had another identity.

Any covers in particular that stand out for you?  Then let your fellow Crivs know by registering your thoughts in our scintillating comments section.  At least, it will be once it receives your contributions.

Incidentally, aside from the first and last covers, the rest should be two per tier.  If that's not how they appear on your screen, let me know - though it might be a problem connected with your browser and not something I can do anything about. 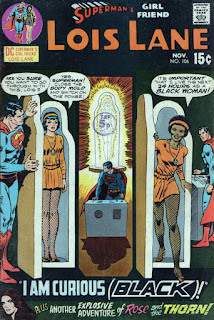 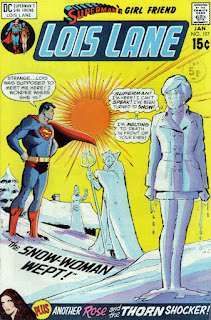 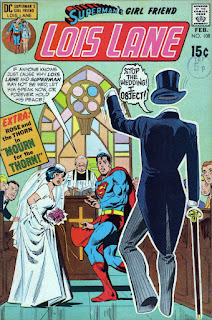 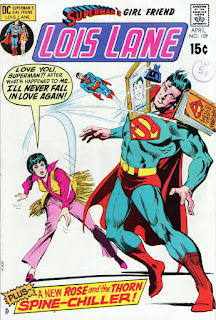 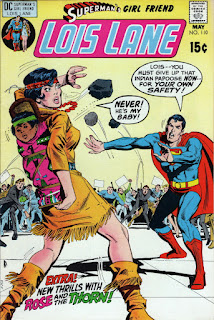 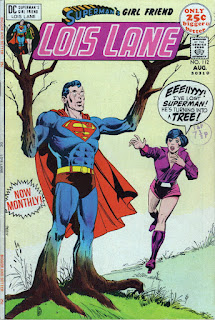 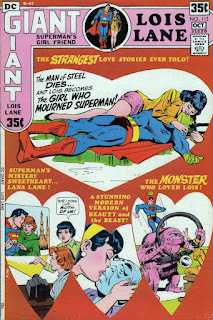 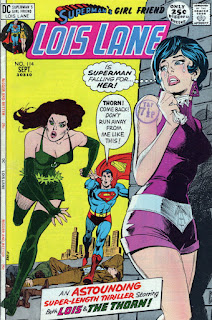 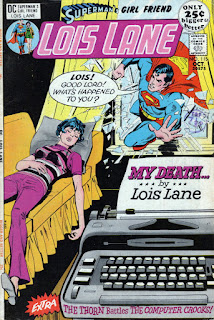 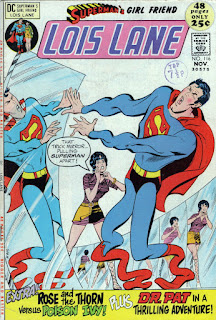 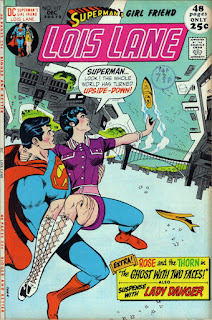 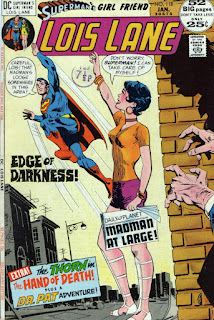 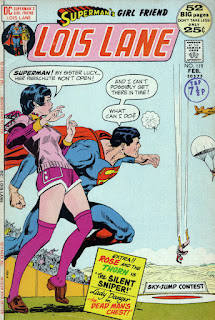 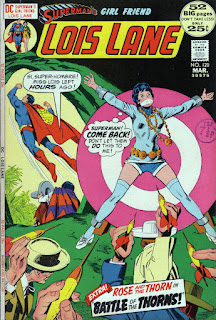 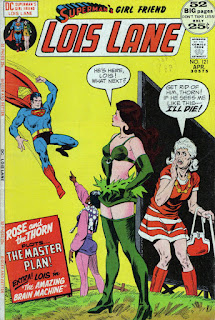 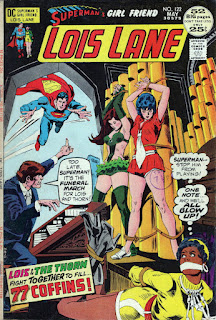 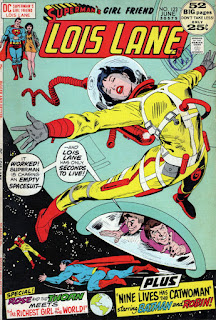 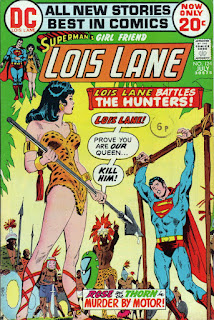 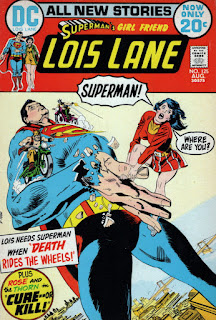 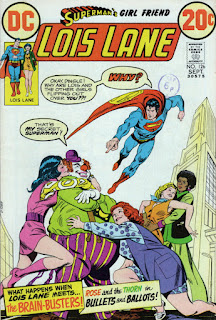 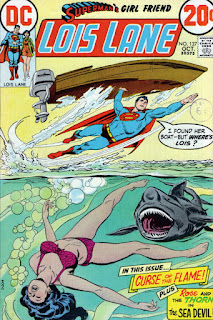 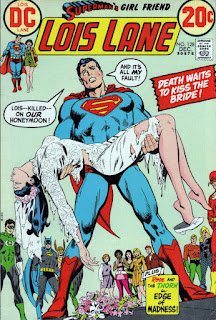 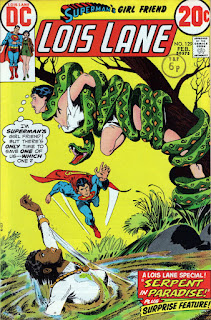 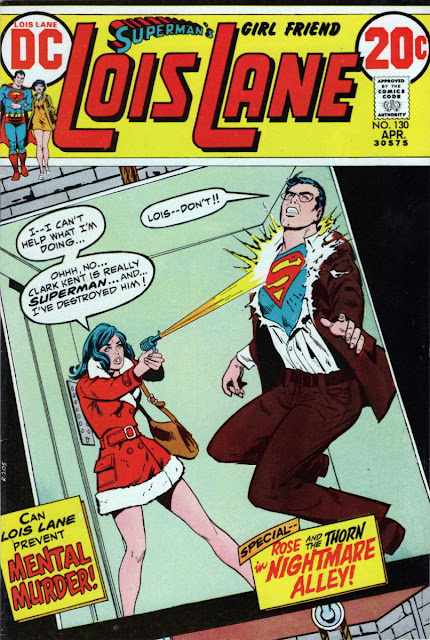 I didn't realise Lois Lane had such an interesting life! Gwen Stacy and Mary-Jane Watson were dull by comparison.

Dick Giordano's work on some of these covers is stunning. Issue #111 is an all-time classic. Some of Bob Oksner's Lois covers are as sexy as covers got back in the day. His poses for Lois are positively indecent but still compelling.

Yeah, but those two never had to carry a regular bi-monthly or monthly magazine, CJ, so they could afford to be dull (by comparison). Which one is your favourite - Lois, Gwen, Mary Jane, or Rose/Thorn?

Interestingly, #122 seems to carry a higher asking price on eBay (even quite creased issues) than others (aside from #106), so I assume it's down to the three bound females on the cover. Lois looks HOT!

Kid, I suppose Mary-Jane is my favourite - I'd never even heard of Rose/Thorn until you mentioned her.

My blog is the font of all knowledge, CJ; whether from me or other Crivvies.

I couldn't help but notice that the cover of Lois Lane 128 bears an uncanny resemblance to the later Crisis #7, or the earlier Lois Lane #102 for that matter. And going back, there are so many covers featuring other heroes holding a dead body ; Batman holding Sgt Rock on Brave & Bold #84, or even Batman holding Robin in "Robin Dies at Dawn".

I then came across this blog entry which lists a whole lot more.... https://comiccoverage.typepad.com/comic_coverage/2007/04/comic_book_cove.html

Yeah, I noticed that similarity, B, and was going to do one of my 'Comics Cover Snap' posts about it eventually. Ta for the link.

The last year or so of LL issues (with the large Ls in the logo) are actually better stories than most of what was being published in the main Superman titles at the time!

They also had a really good artist on them after Werner Roth - John Rosenberger, who gave a real sense of movement to his figures and was an excellent visual storyteller.

To answer the question posed to Colin, I guess I'd choose Thorn over Gwen and Mary Jane, but only because the former is a Tuff Girl, which gives her a little extra oomph. I sometimes think that comics-fans in general might have a little more penchant for Tuff Girls than, say, other fandoms like film-fans and pulp-fans, but there's certainly no way to prove that unsupportable opinion.

Lois isn't really as easily comparable because she doesn't really have a "default" look. IMO MJ and Gwen will always be defined by John Romita, and Thorn by Dick Giordano. But I don't think there's a default for Lois. There's Shuster Lois, Schaffenberger Lois, and as you Kid pointed out Oskner Lois. There are some that people know well, like Byrne Lois, but I don't know if she ever captivated anyone-- but there's also Jim Lee Lois from HUSH.

I'd prefer Thorn, GP, but I'm indifferent to her other self, Rose - and I suppose I'd prefer Mary Jane to Gwen, who always seemed a bit too goody-goody. Also, I suppose it depends what age you are as to how you envisage Lois, and also which mag you first and regularly saw her in. People growing up in the '60s will either think of Schaffenberger's or Swan's version, and '70s readers will think of Curt Swan's, Werner Roth's or John Rosenberger's - as well as Bob Oskner's. Byrne's Lois looked okay, but she never really grabbed me. Never seen Jim Lee's version.