WHATEVER BECAME OF KEVIN AND JANINE? THE ANSWER (UPDATED)... 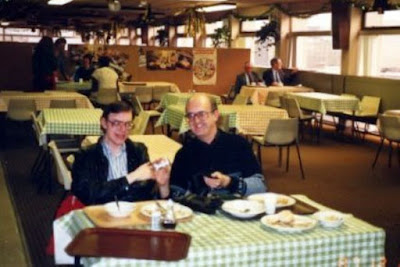 There's actually a good reason for republishing the following post from 2015, which will become evident once you've read the following comment submitted to the blog earlier.

Hi Gordon, Marc Jung here, I do trust you're well these days.  Not sure if you knew, but just a note to say Kevin Brighton died on 5th (actually the 8th) September, 2021, after a long battle with pancreatic cancer, sadly.  I hadn't seen him in twenty years, but was in contact with his wife on Facebook.  Hoping you are not so bad these days.  Best wishes, Marc.

I've no way of confirming whether this comment is genuine or not, but I'll assume it is (in which case, thanks Marc) as it would be a pretty sick thing to say if it isn't.  That's Kevin on the left in the above photo, with his pal Derek Pierson, who sadly died in 2016.  I took the photo around the mid-'80s in the IPC canteen.  Condolences to Kevin's family and friends.

Update: I managed to track down Kevin's obituary and can now sadly confirm that he has indeed passed away.

As for Janine Andrews, she's now around 60 and was being treated for ovarian cancer last year, having battled (and beaten I believe) breast cancer in 2014.  Not sure what her current situation is, but let's hope she made a full recovery. 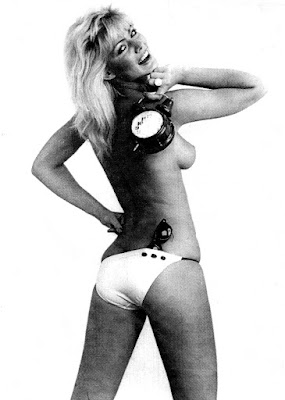 Hopefully, a side-on view of a bit of nip won't shock anyone too much, but there's a reason for me publishing this particular pic.  I think it's Page 3 model JANINE ANDREWS, and the original glossy photo from which I photocopied this image used to adorn the wall under the window ledge beside the desk of IPC art assistant KEVIN BRIGHTON, who worked on the same floor (26th) as myself in KING'S REACH TOWER in Stamford Street, London, circa 1985-'87.

His desk was situated right in front of mine, and as I visited the Capital every week (sometimes twice), I got so used to seeing the lovely Janine that Kevin let me photostat the picture so that I could have my very own copy to take back home with me.  For nearly 30 years it's graced the side of a filing cabinet in my room, and whenever my eyes fall upon it, I can't help but be reminded of King's Reach Tower, the view from the window of the 26th floor, and, of course, Kevin himself.
The last time I saw Kev was in December '87, when I visited London, not for the purposes of work, but for a two day stay in the city just for the hell of it.  In fact, I haven't been back to London since, and although I spoke to Kevin a couple of times on the 'phone shortly after, I don't know what became of him once the IPC Youth Group began to disintegrate following pension-pincher ROBERT MAXWELL's acquisition of it a few years before his ill-fated swim in 1991.
Kevin was quite a talented cartoonist in his own right, so maybe he fulfilled his artistic ambitions, met and married Janine Andrews, ditched the pic, and lived happily ever after.  Whatever happened to him, I have fond memories of my visits down south in the '80s, and one glance at the above perky pin-up brings it all back to me.  Ah, happy days indeed.
******
Update: It's strange to think that Kevin has passed away, because in my mind's eye he's alive as he ever was.  I usually only saw him once a week when I was down in London (except when I'd visit twice in the week as sometimes happened), but each time it was as if the intervening week hadn't existed, and each new day in London followed the day after my previous visit - almost like an alternate timeline, as it were.
I feel that if I got on a coach and went down to London right now, I'd find King's Reach Tower and Irwin House the same as I remember them, and there would be Kevin, Marc and Derek just as they were back in the day, not changed at all.  It's a fanciful illusion of course, but that world of the '80s is as real to me today as it was back then - and I hope it always will be.
Posted by Kid at Friday, October 15, 2021

Sorry to hear about your friend - and as for the story, I hope he met and married the Page 3 model!

I don't think it's likely, MW, but I'm sure he was more than pleased with the woman who did become his wife.

My condolences. It’s a strange feeling isn’t it? I remember thinking if I keep going to all these weddings I’ll have to buy a tux. Now it’s mourning suits.

I hadn't spoken to Kevin in decades once he drifted off the radar, PS, so it's always possible he wouldn't even have remembered me. However, it's still a shame to learn that he's gone, and part of my 20s/early 30s along with him.