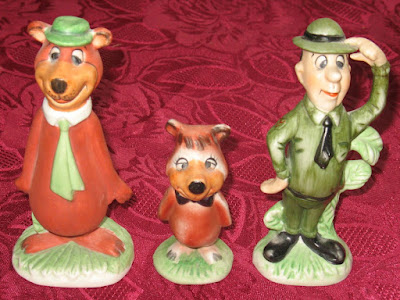 Still on the theme of Yogi Bear, here's a bunch of stuff I've acquired only recently on ebay.  I already have two of the above Yogi and one Boo Boo, but I had to buy the above set of three in order to obtain Ranger Smith.  However, I got the trio for far less than it can cost for any one of them on its own so it was an absolute 'steal' for me.
Below is a toy I've been wanting to own for a while; I think it's from the '60s, but might be a '70s toy.  I've got a monkey version, bought new from an open-air stall circa the early or mid-'90s in my local town centre before it was roofed over.  (It was either there or Woolworths.)  Unlike others in this range, Yogi's arms don't turn at the shoulders, but it doesn't seem to hinder his acrobatics. 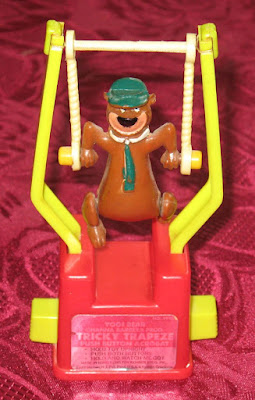 As you can see, his face and eyes weren't painted too well, so I tarted them up a bit with some acrylic paint and then varnished over them with a mix of matt and gloss (resulting in something close to satin), so Yogi looks a lot better now as you can see in the pic below.  I didn't go overboard as I wanted the toy to retain a bit of the 'rough' look that many 'Made In Hong Kong' products had back then.  Had I made it too precise, it would've been too obviously a 'touch-up' job. 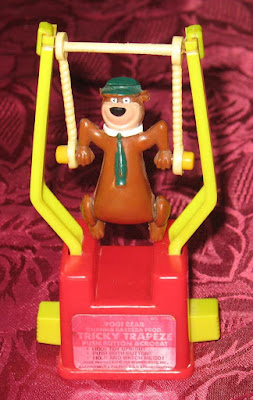 Below is yet another duplicate of a toy I've already got, but this one has its packaging, which has been partially opened though remains undamaged.  So I've got a pair of smoking Yogis and a smoking monkey - haven't lit any of them up so far, though might give them a try at some stage. 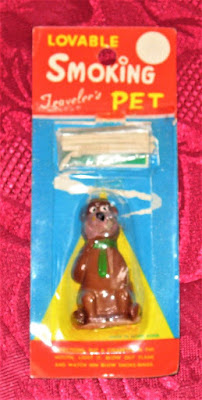 At last - a Yogi Bear mug, adorned with the legend 'Smarter than the average bear'.  It arrived today and I'll be having a cup of tea from it after I've published this post.  What every clever, handsome person should have, so none of you lot deserve one then.  It's for me and me alone! 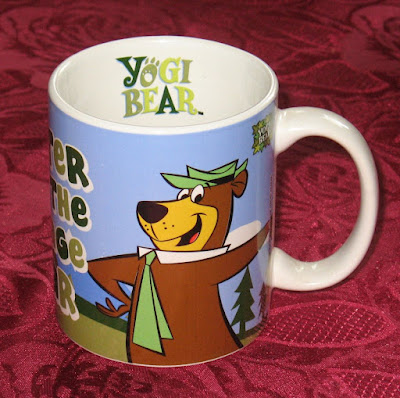 Just in case you didn't believe what it said, below is another shot from a different angle.  Aren't you jealous?  No?  Well, you should be.  As well as grateful for all the time and trouble I've gone to in photographing these treasures just for you. 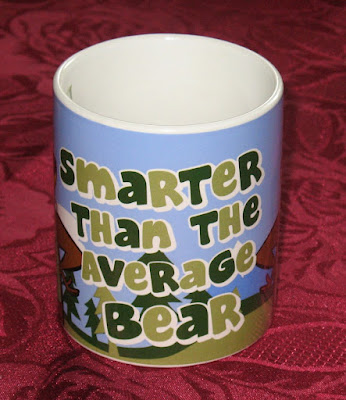 Finally (also arrived today), a Yogi badge from the '60s.  I have a pair of similar badges with Yogi facing front, so this makes a nice variation.  One can never have enough Yogi Bear badges - and I don't even wear badges (and never have).  Right, that's your lot, get on with your chores.  (Whaddya mean, reading my blog is the biggest chore going?  After all I've done for you.) 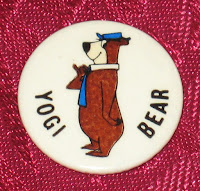 I have a great yogi bear canvas/plastic leather bag with shoulder strap with the same picture and words as on your mug. Bought it about 10 years ago in Swanage. I take it with me when I go to the seaside every year (pre covid)

The mug, although in brand-new, unused condition, is dated 2011, so that would make sense regarding your bag, AL.

I don't think I have ever had any Yogi Bear items like this apart from comics So what's the ultimate Yogi item you would be after?

I've already got it, McS - a Marx Toys Yogi on a friction-drive scooter. I'd like to acquire a '60s Hallowe'en mask and some Yogi slippers that had actual heads (not just pics) of Yogi on top of the front of them. Oh, and an inflatable Yogi (nothing dodgy) like the one I had as a kid. I had the mask and slippers too.

If I was to get anything I would like some original art or prints from the Yogi Sunday newspaper strip, lovely cartoon art .

As is the Flintstones strips, McS. You can see examples on YOWP in my blog list.

I never saw the Yogi version of the acrobatic toy; only the momkey version you mention.

When I first saw the monkey one, I had a vague sense of perhaps having a Yogi Bear one when I was a kid, but wasn't sure. Anyway, I've certainly got one now. Might've had a Goofy one as well, but again, not sure. If I see one I'll buy it if it's not too expensive.

Oh I love some of those old Flintstones Sunday pages, really well constructed and drawn

I wonder if there's ever been any collected editions of those HB strips, McS? I'd certainly buy them if they were reasonably priced.