GIVE ME LAND, LOTS OF LAND, UNDER STARRY SKIES ABOVE - DON'T FENCE ME IN... 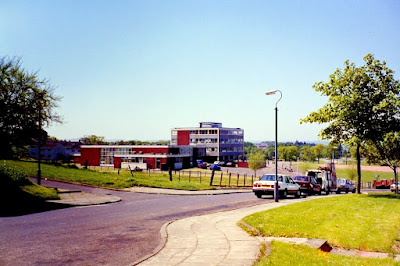 Where I live, I used to be able to stand at the top of the hill along a bit from my house and see for miles.  The view remained practically unchanged from when I first moved here (1972) until around 1993/'94, when some two-storey amenity housing was built on a bit of 'spare' ground.  Then, a year or so back, some flats (and houses) were built behind them on the site where a single-storey school for handicapped kids once stood, which was demolished a couple or so years back.  This has resulted in the almost complete obscuration of the distant horizon that for many years had once been so familiar to me from the days of my youth.  The same thing happened just recently in the street where I'd lived from 1965 to '72;  what was once an expansive view has disappeared behind a sea of new roofs on houses that were erected around two or three years ago.  (The photo above is how the street looked in 1988, the bottom photo is how it looks nowadays.)

Now, I know that people need to live somewhere, but this narrowing of horizons due to constant building affects everybody.  For example, there are now more kids living in those new houses, but as the houses are built on former playing fields, there's less place for that greater number of kids to play, which is hardly an ideal situation.  What were once bright, open and spacious areas where one could see distant hills and skies above and beyond them are now dark, closed and narrow housing schemes behind which the wider world is hidden from view.  I don't think it's a good thing for people to feel closed in and cut off by their own claustrophobic environs;  the sight of fields, forests or clouds in the distance can be an uplifting experience which makes the spirits soar and improves the quality of life for everyone.

With more houses also comes more traffic as every household seems to have at least two cars these days.  Pedestrians can hardly walk on the pavements because of vehicles parked on them, leaving little space to manoeuvre, and none at all to anyone pushing a pram or confined to a wheelchair or mobility scooter.  Round my way, drivers regularly park up on the pavements, despite there being plenty of road room for other cars to pass them without collision.  One neighbour recently parked on the entire pavement in front of steps leading to some houses, meaning that any pensioners with poor eyesight and unsteady of foot could well have had an accident attempting to negotiate the obstacle.  Personally, in older areas which were built when car ownership was less common, I'd have a limit of one car per household - take a bus or taxi if that doesn't work for you and leave the pavements to pedestrians.

I could nip your ear for hours with a long list of why I think the world is shrinking and closing in on us, but I'll spare you that ordeal.  Suffice to say, there are just far too many humans on the planet nowadays and if there's one species that needs culled, it's ours.  In our feckless society, where marriage and commitment are on the decline, people move from one failed relationship to another, having children with multiple partners and putting a severe strain on resources like housing and the NHS.  Far too many parents these days have got several kids by three or four different partners, and all these children are going to need houses when they grow up.  Personally, I'd put something in the water supply to prevent people being able to have kids in the willy-nilly (no pun intended) way they do nowadays.  Then, if you wanted to start a family, you'd have to sit a test to determine your suitability, before being given the antidote to what's in the water.

Okay, maybe I'm stretching things too far, but what would your solution be to crammed housing schemes and the gradual (but quickening) loss of green areas within and without town and cities, which will invariably lead to even more congested and depressing living conditions for future generations?  Do tell. 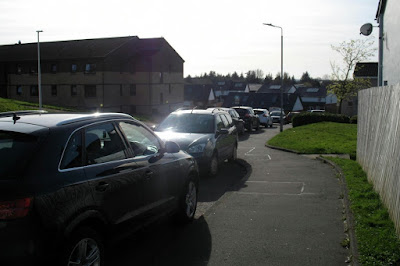 Gone now are the days of those rows and rows of Coronation Street houses. What we are seeing now and in the future is rows and rows of apartment buildings with all 100 occupants fighting for the three carparks to park their cars and masses of wheelie bins chocka with ripe garbage . Plus you being the lucky tenant whos tiny little unit happens to be next to the guy who practices the drums when you hit the pillow.. Hell why should we worry as in 20 years time we will have our oun little box be snug in it six feet underground.. So whens Jodie Whittacker becoming babe of the day.

Maybe one day when she isn't a transgendered time-traveller who sounds like Vera. Incidentally, I'm hoping for far more than 20 years before I get fitted for my snug box, LH.

I was just perusing tonight's schedule on Radio 4 and at 8pm there's a documentary about how the Japanese are losing interest in sex - apparently by 2060 the Japanese population will have plummeted to 86 million from the current 127 million because of the falling birthrate. Sounds like a good thing to me - the human population needs to be drastically curtailed in all countries. I'd make it illegal to have more than two children or maybe even one. But I give it maybe a few more decades before civilisation starts collapsing which will lead to mass starvation and the problem of over-population will be solved. The survivors will rebuild from the ruins and maybe learn from our mistakes.

One sad 'truth' about humans, CJ, is that we never seem to learn from our mistakes. As for the Japanese losing interest in sex, it's probably down to all those lifelike sex dolls they make. Who needs a real woman if you've got one of them? (I don't.) Except for cooking and cleaning of course. Just think, all the sex you want, but without the inane chatter about what's happening in the TV soaps.

I'd put a chemical in the water supply that would sterilize anyone with an IQ lower than 100.

We require licensing to drive a car on a public street; we have laws prohibiting convicted felons and legally insane people from owning firearms; we require extensive background investigations, training, and testing for police officers and firefighters; we require that doctors and nurses be licensed and certified; we require testing and licensing for plumbers, electricians, and barbers. But, to be a parent, you just have to have sex with someone you met in a bar half an hour ago. And, if you are incompetent and unable to support your children (or lazy and unwilling to support them), you get on the dole, and the government taxes responsible people to subsidize your irresponsible behavior. Able-bodied young adults having multiple children by multiple partners put a strain on our public assistance programs, reducing the availability of benefits for the elderly and disabled. Our social safety net has become a hammock.

What gets me, TC, is parents who start a family with no means (and sometimes no intention) to support one, expecting the rest of society to pay for any kids they have. If you don't have a job, then you shouldn't be allowed to have kids until you do.