FROM PANEL TO PAINTING...

Red is my favourite colour, so it should come as no surprise that the above cover really grabbed me when I saw it in the shop window of W. & R. HOLMES back in late 1972.  Of course, it's not just the colour that appeals to me, but also the fact that it's The HULK doing what ol' Hulkie does best - going on a rampage!  I don't know who the artist is on the cover of the MARVEL Annual for 1973, but I can tell you that the scene is based on a panel from one of the interior stories, pencilled by JACK KIRBY and inked by STEVE DITKO.  Isn't it a stoater?!

However, this wouldn't be a Crivens! post without a critical observation or two.  In the original panel, Jack hasn't drawn The Hulk large enough as he looks smaller than the soldiers, and the cover artist has repeated this oversight in his rendition of the scene.  Still great though. 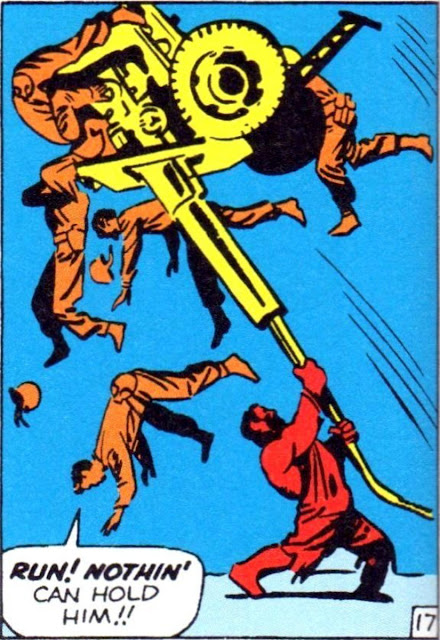 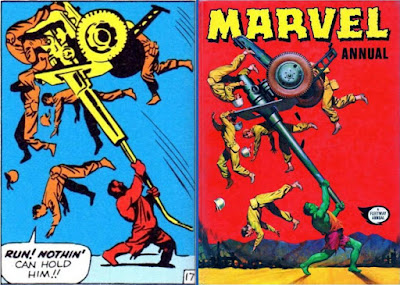 I always wanted that annual but it was sold out where I lived at the time. Despite reading "Mighty World of Marvel" from issue 1 until its end (and all the follow up titles "Marvel Superheroes" etc) I never bought or got as a present any Marvel annual (even although I think this wasn't actually the official MWOM annual). Strange that over 45 years later the last new comic I bought was last months MWOM from Pannini.

Actually, it WAS the official annual, PM, but because Marvel UK didn't have the set up at that time for producing annuals, they got Fleetway to do it on their behalf. MWOM advertised the book in the weekly. The next one was also produced by Fleetway, and then World Distributors took over for a while. There was a stall in the Barras that had dozens of brand-new copies of this book in late 1973, obviously unsold 1972 stock from somewhere, and I bought one every week for around three or four weeks when I was in there with my dad. I really loved (and still do) this annual. Talking of MWOM, buy #9 when it comes out, because it's a Marie Severin Special.

A truly great annual, and an iconic one for me, not least because it contains the first Conan story I ever read ( Zukala's Daughter- still my all time favourite )

That Conan tale was the second I ever read, PD, the first being Conan #1 on a friend's back doorstep around 1971. I'd love to see this annual republished, but with every strip in full colour.

Yes but no for me, it's that old paper and printing that hits the spot!

Ah, but I'd have both, PD. The best of both worlds.

The trouble with the old paper is that now it's brown and getting brittle. Fleetway really produced their annuals as throw aways not 'keepers'

As did most publishers of the time, T47. However, it can (but not always) depend on whether they've been looked after or not, and under what conditions they've been kept. Some of my annuals are perfect, others have a bit of aging going on. I just take 'em as I get 'em when I'm buying replacements for ones I used to have. When it comes to ones I've always had though, some are perfect, others have a bit of tanning or a few age spots. They've all been kept under the same conditions, so why some are better than others, I'm not quite sure. Same with my comics.

This annual was my comics bible in my early days. The Hulk vs the Toad Men! Spidey vs the Scorpion! Conan vs Zukala! I must have read it a thousand times!

I was doomed from that day on!

I reckon it's my favourite UK Marvel Annual. I scanned the cover and printed it out to use as a poster on my wall not too long ago.