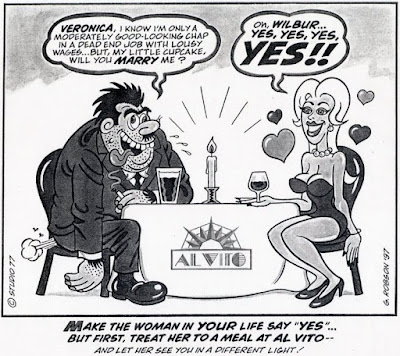 The above pic is a B&W copy of a colour cartoon for a proposed
ad for a local restaurant, which I did some years ago.  (It's a shame I no
longer have a colour copy 'cos it was quite nice.)  However, rarely does
a cartoon (or any illustration for that matter) spring full-blown from the
hand of its creator;  it usually undergoes a process of development 'til
the finished result is reached.  Let me show you what I mean.

The following picture is the original 'rough' suggesting the idea.
This is to show the prospective client what one has in mind.  (I say
'prospective client', but in actual fact I was doing a 'favour' for the
owner.  You know the old saying "There's no such thing as a
free lunch" ?  Well, this is the proof of that saying.) 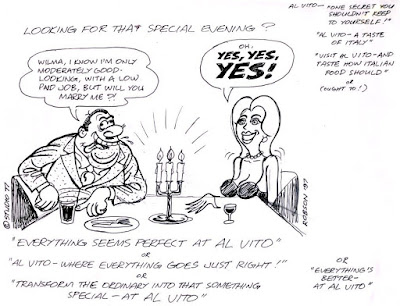 Below is another rough of the proposed final
drawing - this is essentially what I'm aiming for. 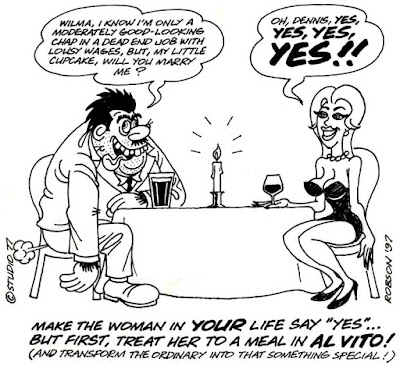 And now the finished line artwork.  I added the restaurant's logo to
the tablecloth and then coloured it with acrylic inks.  The finished pic
was very effective, but unfortunately I gave it to someone, so only the
B&W and grey copy at the top of the page remains in my possession.
You'll just have to imagine it in colour - the guy has a blue suit and
the girl has a red dress, if that's any help.  Trust me - it was nice. 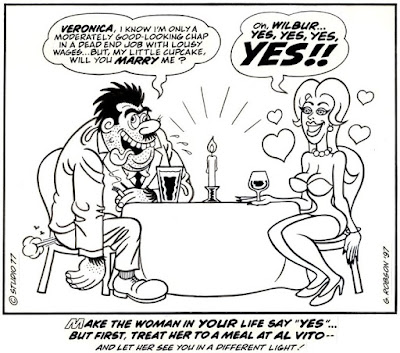 And guess what?  After all that work, the idea for the ad was
abandoned.  Just another day in the life of a cartoonist, eh?
Posted by Kid at Monday, June 19, 2017

It is not surprising the cartoon was not used. This observation has nothing to do with the artwork, but it is never a good idea to to poke fun at potential customers, especially the one most likely to pick up the bill.

Actually, it WOULD have been surprising if the cartoon hadn't been used for that reason, PP, because I believe most people are capable of appreciating the humour of the piece without identifying with either character. The couple in the pic don't exist - they're cartoons and therefore not 'potential customers' being made fun of. It's an exaggerated scenario in order to make the point (hyperbolic though it is) that the joint is so classy that everyone looks good, and everything seems better than it is. Despite your usually formidable brain, you're over-thinking things to an extreme degree in this situation. IT'S A CARTOON! (The decision not to use it was down to cost, not reservations about the humour.)